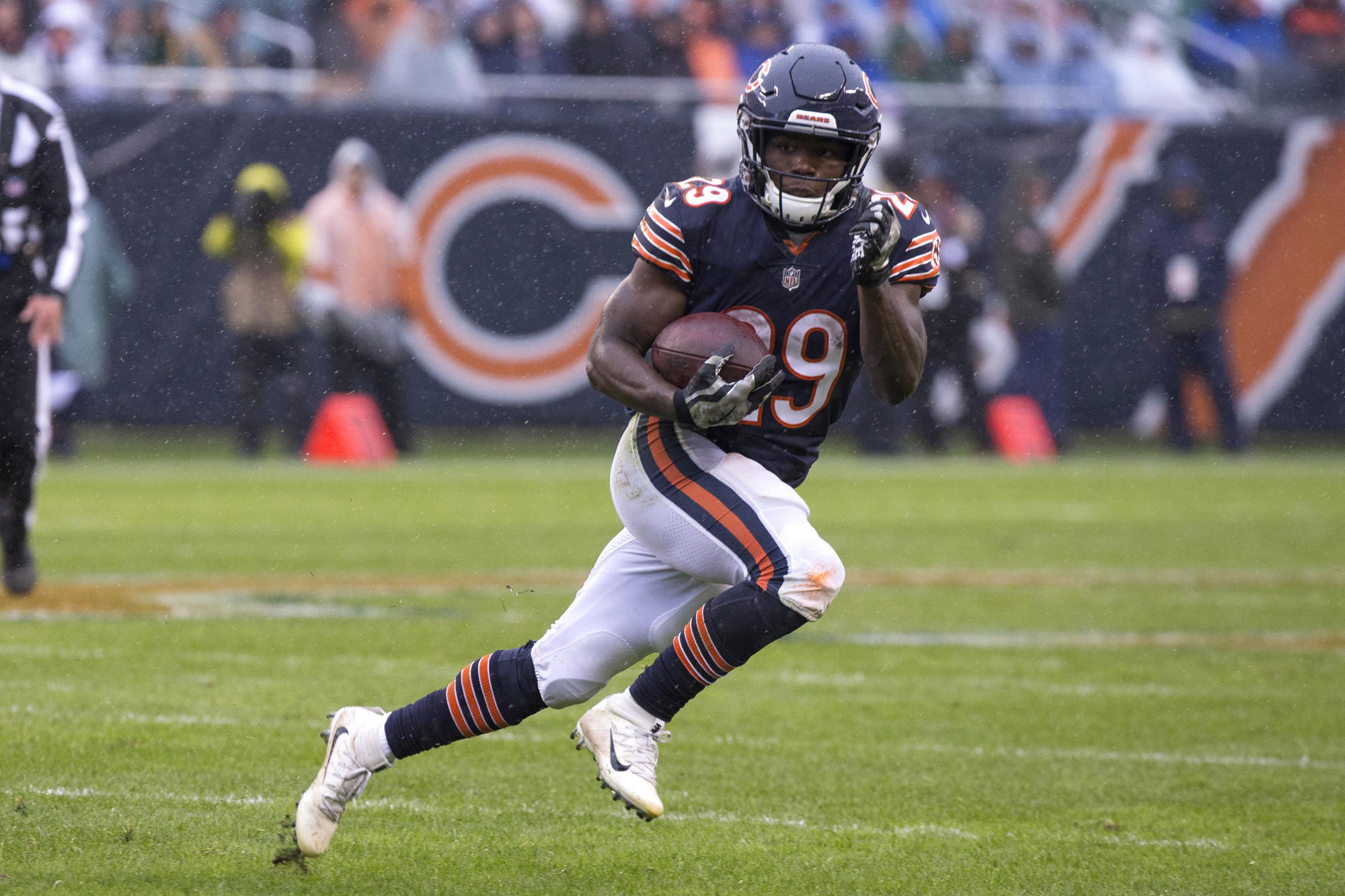 Tarik Cohen will go from criminally underutilized in 2017 to used to perfection in 2018, making him a true Fantasy Football Blow-Up candidate.

All of the Bears’ offensive ships will rise with the creative and aggressive Matt Nagy now calling the shots. Yet, no player is set up for a greater fantasy football leap than sophomore RB Tarik Cohen. Here’s why:

This is a snippet from our Matt Nagy & Chicago Bears Fantasy Football Preview, one of nine new HC and OC breakdowns found in our (FREE) 90+ page Fantasy Football Coaching Carousel: The Most Comprehensive Guide to 2018’s New Offenses

First – Cohen drips in explosiveness and huge play ability. In fact, over 50% of Cohen’s runs went for 15+ yards, making him PFF’s top “Breakaway Threat” from 2017. His nickname is “The Human Joystick,” after all. Just watch him zip through defenses with ease here:

Yet, despite these playmaking flashes nearly every time he touched the ball, Cohen remained criminally underutilized by John Fox and co. Expect the exact opposite under Nagy, who’s “giddy” about all the ways he can maximize Cohen’s explosiveness and versatility.

As the Chicago Sun Times detailed, Cohen’s 2018 usage could be so extensive and creative that he “arguably is busier learning coach Matt Nagy’s offense than anybody except quarterback Mitch Trubisky.”

The sophomore back has reportedly been “all over the field — running inside and outside, coming out of the backfield on pass plays, pass-protecting and lining up as a wide receiver.”

QB Mitch Trubisky has taken notice, saying, “It’s a great thing that he has a lot to learn because that means we’re trying to get him the ball in so many different ways in this offense…Tarik’s a really smart player; that’s the great thing about him.”

‘‘Not only is he dynamic with the ball, but he understands the offense and knows how to open up his other teammates, whether it’s just doing his job or making a block or running a specific route without the ball.

But we all know what he can do with the ball in his hands, and for him to be a smart player who understands the offense, we can pretty much line him up at any position.”

Cohen perfectly fits the “Reid” mold as an elite receiver with underrated power up the middle ala Jamaal Charles and Brian Westbrook.  Nagy has already praised his route-running, stating:

“You may look like you can run routes, but can you really run routes? He’s able to run routes… Sometimes that can be a disadvantage to a defense because they’ve got to cover him all over the field. You can’t just put him in the backfield and say to the middle linebacker, ‘Cover him.’ So we’ll try to do some things there. He’s an athletic kid who does a lot of things well. We’ll have some fun with him.”

This is ideal, considering backfield mate Jordan Howard is among the worst receiving backs in the league. While Howard will still feast on early downs and in the red zone, Cohen will dominate receiving down snaps.

Cohen himself is ecstatic with the increased usage and coaching creativity, noting, “I feel like I fit very well into the offense. I’m doing a little bit of everything — outside receiver, in the slot and at running back as well as special teams. I feel like this is the offense for me.”

At minimum, Cohen could pile on at least 20 more receptions to his 2017 total of 53. There’s a fair chance he emerges as an 10-15 carry guy, given he makes this offense far less predictable. Finally free from Fox’s shackles, and now under the perfect coach to capitalize on his skillset, Cohen’s 77th ADP is going to look foolish come the end of 2018.

To read more about how Matt Nagy could be 2018’s Sean McVay and lead a historic turnaround in Chicago,  click here.

Plus, this is only one of nine new HC and OC breakdowns found in our (FREE) 90+ page Fantasy Football Coaching Carousel: The Most Comprehensive Guide to 2018’s New Offenses. Get a huge leg up and download yours today!