Stefon Diggs To Explode and Outscore Adam Thielen in 2018 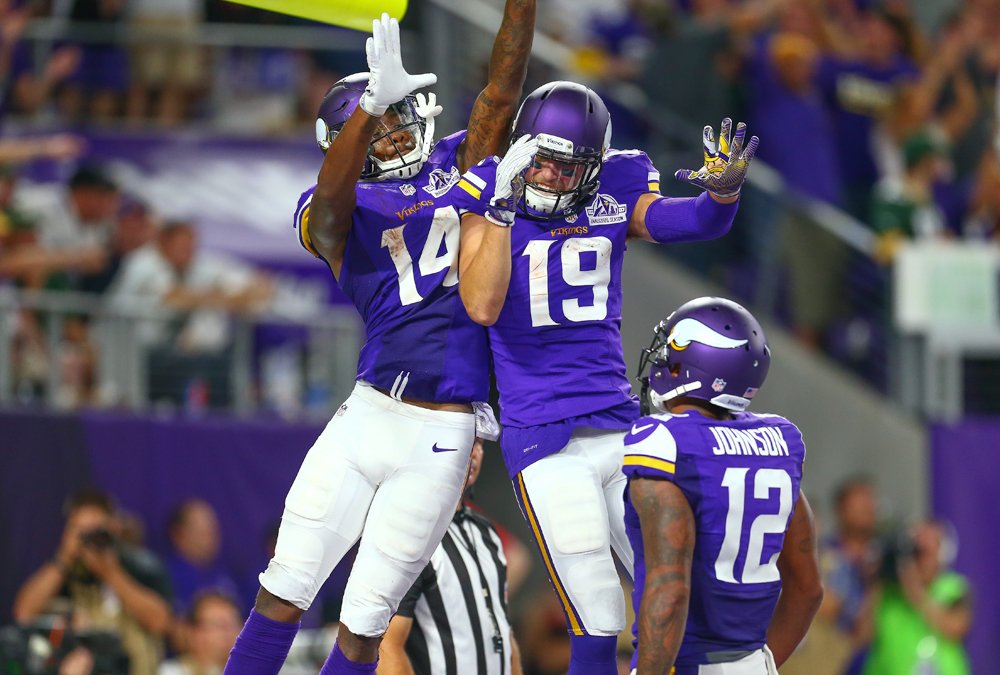 Adam Thielen and Stefon Diggs could not be more perfect for new OC John DeFilippo’s system. DeFilippo wants receivers who can run the entire route tree from every single position. Both wideouts are dangerous on every pattern,  vast experience both outside and in the slot. The creative, mismatch possibilities are truly endless here.

Just look at their history: Stefon Diggs was the primary slot man in 2016, racking up 43 catches and 478 yards inside; a year later, Adam Thielen logged the most slot snaps, and did the most damage here with 592 yards on 46 receptions. Both have the finesse and pristine route-running to dominate inside.

Even more, Diggs in particular can dominate in one-on-one situations. In fact, Diggs was PFF’s highest graded WR in contested situations last year.

This mirrors DeFilippo’s evaluation of Diggs, who was not only “shocked” by his pristine route running, but also added, “More of the tape study of what I had of the Vikings was when I got here, the tape doesn’t do that justice,” he said. “His ball skills are fantastic. The way he tracks the football in the air.”

This is crucial praise from DeFilippo. When you dig into his red zone philosophies and tendencies, he’s gushes about giving his players chances to win those one-on-one balls:

“Red zone football is about matchups,” DeFilippo said. “It’s who can beat who, one-on-one. Can a back beat a safety one-on-one in the hole? Can a receiver beat a DB one-on-one, in a two-yard space, where you’re telling him he has two yards to work from the back of the end line to go up and get a football?

“I’ve been on a team where we had a bunch of 5-foot-8 receiver [in Cleveland}, and it made life really, really hard, and our 6-foot-5 tight end [Gary Barnidge] broke Ozzie Newsome’s record for touchdowns in the red zone. So, does having guys that are bigger, like [Stefon] Diggs and [Adam] Thielen and [Laquon] Treadwell and [Kyle} Rudolph help? Heck yeah.”

Expect Diggs’ contested skills to be called upon heavily in the Red Zone. According to “all accounts,” Diggs “has shown up to OTAs and the offseason program looking quicker and stronger as he works to develop a bond with a new quarterback in Cousins.” I like his chances at topping 10+ TDs for the first time in his career.

Health remains an issue — he’s missed time in all three of his professional seasons, and often seems to have something nagging to play through. Yet, if he can get this under control, Diggs is set up for his first 1,000 yard and double-digit TD season of his career. He’s never played with a coach who can maximize his skill set, or a signal caller who can deliver the mail, quite like DeFilippo and Cousins. Despite Thielen’s massive 2017 breakout, I think Diggs is the highest scorer here.

Though Thielen would be hard-pressed to top his Pro-Bowl level 91 receptions and 1276 yards from last season (especially if Diggs can stay healthy), he could stand for an uptick in his 4 TDs — especially under Red Zone maestro DeFilippo. Thus, I expect him to remain a low-end WR1, with the upside to even surpass last year’s explosion if Diggs’ health woes get in the way.

All-in-all, both WRs will be playing with the best QB, and potential best play-caller of their young careers (granted, Shurmur is a beast). Expect a career season from Diggs (health-permitting), and continued success from Thielen, making both prime Round 3 targets — ideally as high-end WR2s, yet passable WR1s if you’ve gone RB-RB for a stable of horses.

To learn more about what to expect out of John DeFilippo’s offense in 2018, check out our Vikings Team Preview.