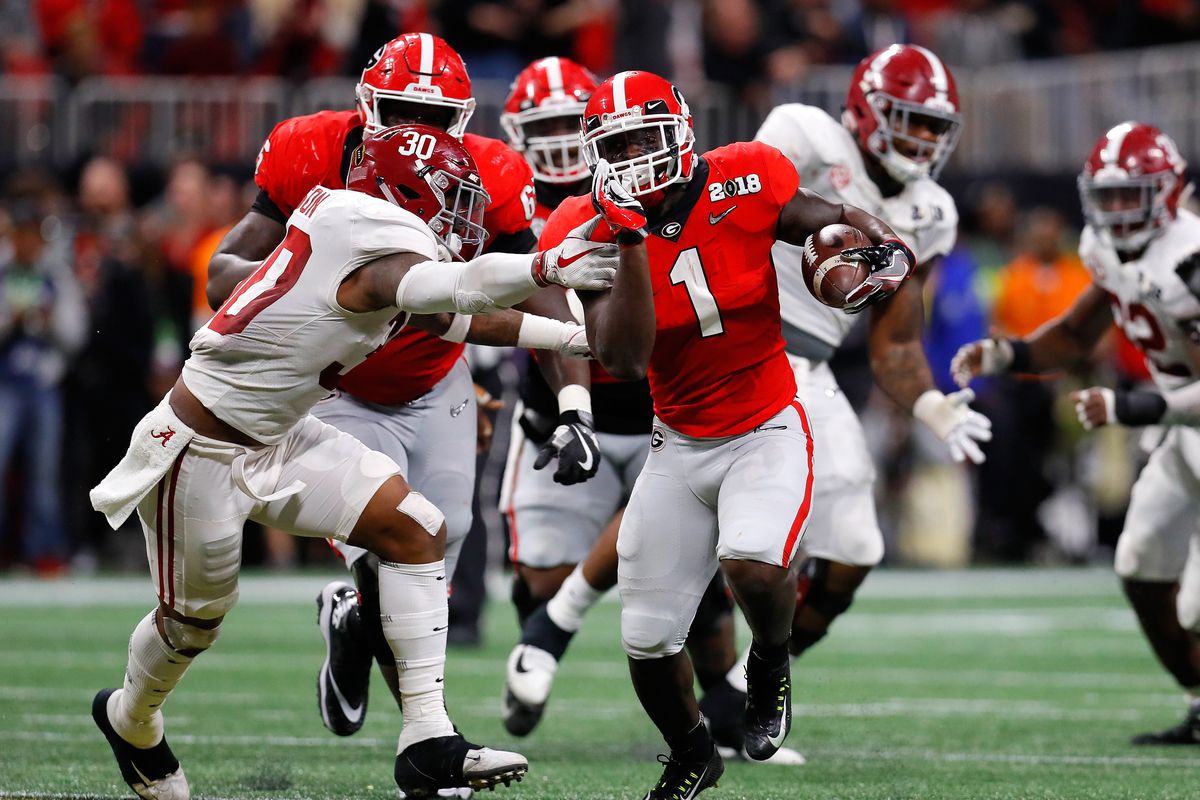 Despite glaring defensive needs, the New England Patriots selected Georgia RB Sony Michel with the 31st pick of the 2018 Draft. This suggests the team views him as a true game changer and critical offensive cog, creating enormous fantasy football upside given Michel's high Talent, Coaching Scheme, and Surrounding Talent scores. The 5'11", 214 lb Michel often draws Alvin Kamara comparisons, and for good reason. Our favorite draft guru Dane Brugler's scouting report on Michel mirrored Kamara's skillset: "Elusive in tight quarters due to his start/stop footwork…shows burst in/out of his cuts…quickly scans and gets north-south…excellent timing and initial acceleration through the hole…deceiving run strength to maintain his balance while tacklers slide off him."

The 5’11”, 214 lb Michel often draws Alvin Kamara comparisons, and for good reason. Our favorite draft guru Dane Brugler‘s scouting report on Michel mirrored Kamara’s skillset: “Elusive in tight quarters due to his start/stop footwork…shows burst in/out of his cuts…quickly scans and gets north-south…excellent timing and initial acceleration through the hole…deceiving run strength to maintain his balance while tacklers slide off him.”

Imagine what Belichick and Josh McDaneils can do with their own Kamara-esque dynamo.

Though I love Dion Lewis, the Patriots have lacked a back that genuinely threatens a homerun on every touch for quite a while. Michel possesses the skillset to crib a run or catch from any down and distance, and will bring an electric jolt to an already explosive offense. He brings similar versatility as Lewis, and should inherit his 13-16 weekly touches, while adding more size and pop around the goalline to be a genuine TD machine (New England rushed for 16 TDs in 2017 (6th most), and 19 in 2016 (5th most)).

Also similar to Kamara, Michel’s consistently operated as a committee back and isn’t likely to approach “bellcow” status. Still, while the quantity of volume won’t wow, the quality of said looks will be sky high. Thanks to a beautiful combination of high Coaching Scheme and Surrounding Talent scores, Michel will constantly be fed favorable looks to maximize his tantalizing skillset. He averaged a scintillating 7.9 YPC last season, and should top 5.0 behind a rebolstered offensive line (now featuring Michel’s own LT Isaiah Wynn) and with the looming presence of the GOAT Tom Brady keeping defenses honest and scoring chances plentiful.

We can’t pretend Michel’s without risk, however. As mentioned, the Patriots have often been unpredictable in RB usage given their (correct) approach in scheming based on opponent. More frightening, Michel comes with some ball-security concerns. Indeed, he only fumbled twice as a senior and this is a coachable fix, but Stevan Ridley fumbled away his low-end RB1 Fantasy Role not long ago; Bill Belichick will not hesitate to put Michel into his prison-tight dog house if he can’t sure this up. If nothing else, it sends a major message, and no one likes to do that more than The Hooded One.

All-in-all, though, the Patriots bypassed some key needs to add the dynamic Michel. They clearly hold him in the highest regard and have a clear vision for his future, and that plan likely involves enormous fantasy upside. With the talent to pull away and establish a 18-20 touch role in a juggernaut offense, Michel carries a very real RB1 ceiling. Admittedly, however, he also carries cavernous floor should he fumble away this prime opportunity and/or become committee-trapped. Still, this is the type of upside worth investing in, especially if you love building a stable of workhorses like myself.