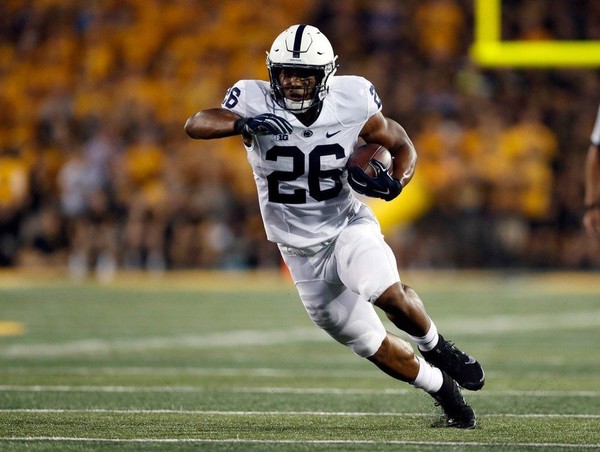 Barkley lands in the ideal spot for his fantasy football value, staring at a Workhorse Role in an offense that remains explosive, but ready to make him the centerpiece.

Saquon Barkley lands in the ideal spot for his fantasy football value with the New York Giants. His Talent is generational. Pat Shurmur is a bellcow breeder. This offense drips in explosive potential. All the fantasy stars have aligned for a Top Five overall season for Barkley.

Running Backs don’t get more “complete’ than Barkley, who’s not unfairly compared to a “Bigger Barry Sanders.” He’s incredibly versatile, legitimately on par with Le’Veon Bell and David Johnson in terms of butter-smooth route running despite a monstrous 230+ lb frame. Speaking of size, Barkley’s powerful enough to get the tough yards, yet shifty and elusive enough to win in space.  He can hit the home run or burst through the pile for a tough TD. Simply put, he does it all.

And no one can squeeze more from a versatile back than new HC Pat Shurmur. From Steven Jackson, to LeSean McCoy, to what Dalvin Cook was becoming (and even *gag* Trent Richardson), Shurmur has ridden a three-down workhorse whenever able. According to PFF’s Scott Barrett, Shurmur’s RB1s have averaged 308.7 carries per season (83.9% of team’s share) + 61.3 targets — insane overall volume, especially in a committee-plagued era. The Bellcow Enthusiast might have his most versatile threat yet.

Lastly, the offensive situation may be perfect. Behind an aging Eli Manning, the Giants are ready to hand the offensive reigns over to a 25+ weekly carry bellcow; prior to the draft, Todd McShay noted as much, stating: “I’ve heard very strongly that there are important people in the building who believe in Saquon Barkley and being a physical, run-first team. Barkley can be the face of the team for the next 10 years.” The New York post noted, “the Giants view Saquon Barkley as a near-perfect prospect… a better player than Ezekiel Elliott.”

Yet, Manning still has enough juice to keep this offense and the explosive Surrounding Talent churning. The Giants have an explosive stable of receiving weapons, obviously highlighted by Odell Beckham Jr., and rounded out by blossoming freaks Evan Engram and Sterling Shepard. This unit should move the ball with ease, creating consistently long and sustained drives, in addition to plenty of scoring opportunities. Boxes can’t be stuffed, and Barkley should find oodles of space underneath to flourish in the receiving game. The Giants line is mediocre and the only “negative” here; still, Nate Solder‘s addition should certainly help.

Simply put, Barkley couldn’t have landed in a juicier situation for his fantasy football value. His insane combination of Talent, Usage, Surrounding Talent, Coaching Scheme and Upside make him well worth a Top-Five overall selection.