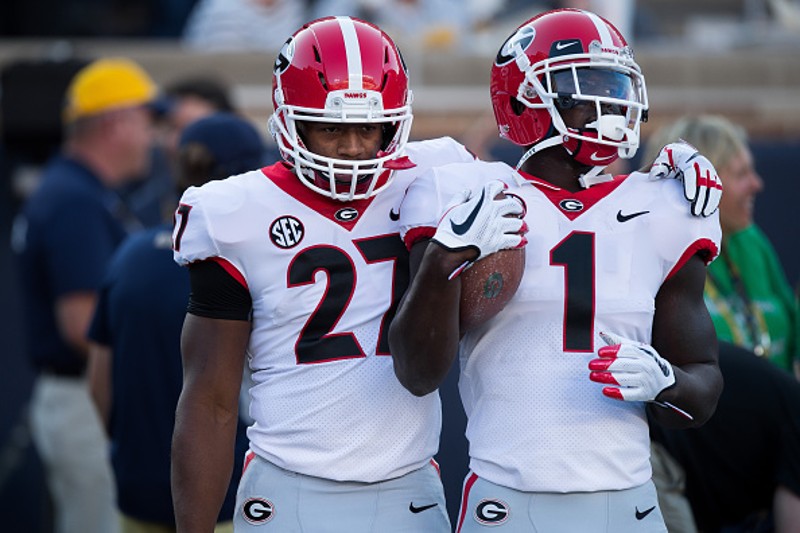 With the NFL Draft kicking off on April 26th, it gives every team a chance to improve themselves with young talent. Although only a few players at each position will make a real fantasy football impact as rookies, there are still many who are worth keeping on your radar. These positional rankings are based on their 2018 fantasy football potential, followed by stashability in dynasty leagues.. Check back throughout the week for the rest of the positional rankings.

1. Saquon Barkley — If you’ve been slightly awake over the past two years, you know who Saquon Barkley is and what he’s expected to do in the NFL. He’s a three-down horse who is built like an Olympian athlete. Depending on his surrounding talent score, Barkley could go in the first round of your fantasy draft.

2. Derrius Guice — Guice was overshadowed by Leonard Fournette, but actually racked up a SEC-best 1,387 yards and 15 rushing touchdowns in 2016 while Fournette was out with injuries. Unfortunately, Guice followed that up with an injury-riddled final season of his own. Guice runs like Marshawn Lynch, but his battering ram style is a cause for potential long-term concern. Will be a day-one starter.

3. Sony Michel — Michel shared the Georgia backfield with Nick Chubb (and Todd Gurley at one point), making the Bulldogs one of the toughest teams to defend on the ground. Michel proved in the title game against Alabama (98 yards on 14 carries) that he was the better of the two backs against a loaded defense. Michel is a future three-down back.

4. Ronald Jones II — I originally had Jones as the RB2 in this class, but he needed to be dropped down a few notches after an underwhelming combine and pro day. Once selected, Jones needs to prove that he can catch the ball out of the backfield — a part of his game that was underutilized in college. I still have high hopes for the USC product, as the film doesn’t lie.

5. Rashaad Penny — Penny was built in a running back laboratory (5-foot-11, 220 lbs) and also filled the stat sheet when he led the nation in both rushing yards (2,248) and rushing touchdowns (23). After backing up the NCAA’s all-time leading rusher, Donnel Pumphrey for three seasons, it’s safe to say Penny has the least mileage on his legs and is set to do damage in the NFL. Penny is a future three-down back and could be that late-round flier that may win you your league.

6. Royce Freeman — A four-year starter at Oregon, Freeman has logged some serious miles (5,621 yards on 947 carries) on his gigantic legs (5-foot-11, 234 lbs). Freeman is a complete back who has bell-cow potential. Was very explosive at the combine for his size, running a 4.54 40 and jumping 34 inches vertically.

7. Nick Chubb — Chubb is a bowling ball (5-foot-11, 228 lbs) who suffered a gruesome knee injury a few seasons ago. He was able to return to form, but his lack of quickness was definitely exposed against Alabama in the title game. Surprisingly though, he ran pretty well (4.52 40-yd dash) at the combine. Chubb a pure running back, but he’ll likely be a plodder in the league.

8. Kerryon Johnson — Right away you’ll notice that Johnson runs with a high pad level, he possesses similar patience like Le’Veon Bell and can also catch the ball out of the backfield. He was a workhorse at Auburn but also has some injury question marks, as it seemed like he was dinged up all of last season. In a way to preserve his health, he should be in a committee, but definitely provides fantasy potential.

9. Nyheim Hines — If there’s any player who could provide an Alvin Kamara-like upside, it’s Hines. He ran a blazing fast 40 time (4.38) and is probably the best receiving back in the class (89 receptions in three seasons). Put Hines in a check-down offense and let him make plays in space.

10. Mark Walton — On tape, Walton looks like a future PPR star who possesses the speed, hands and athleticism to make plays in space. But ran a very underwhelming 40-time (4.60). Walton is a highlight reel, boom or bust player who also has some off-field and injury issues. He seems like a guy who could have a big year, or spend the year on IR.