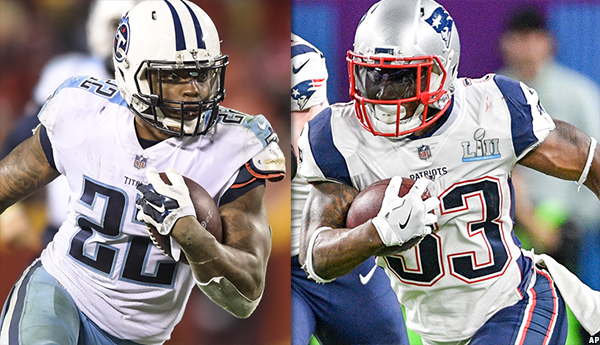 Just a few weeks ago DeMarco Murray was finally released by the Titans, which cleared the way for Derrick Henry… or so we thought.

The #Titans have released RB DeMarco Murray. They are going with Derrick Henry as their lead back

Then just a week later, the Titans sent shockwaves throughout the fantasy football community when they signed arguably the best all-around running back on the open market, Dion Lewis. From a real-life football perspective, Lewis is the perfect rusher for new offensive coordinator Matt LeFleur’s offense — which is predicated on merging the running and passing game. But from a fantasy standpoint, it potentially destroyed the value of two players who could’ve flourish as standalone RB1s.

“In my mind, we’ve got a big running back. We’ve got a big first- and second-down back,” Vrabel said of Henry. “Dion provides a different body type, a different playing style. So how the two will complement each other, I’m not really sure. But I know that one’s got a certain skill set and another body type and one is a little smaller, probably a little quicker, and has a different running style.

“One guy may get 20 carries one week because of the defense we’re facing, and one guy may get 25 carries, whatever it may be,” Vrabel said. “But I think Derrick is a young player that we are excited to give the opportunity to, just like when you watch the Kansas City game.”

That loud thud you just heard was The Wolf fainting after realizing the player he once described as ‘The Next David Johnson,’ will in fact, never get a crack as a three-down back in Tennessee. Wolf had Henry ranked as high as RB8 in his rankings, then the addition of Lewis plummeted the former Alabama back all the way down to his RB21 — one spot behind Lewis.

When looking at the coaches who Vrabel played and coached under, the acquisition of Lewis makes total sense. Bill Belichick has always deployed a shifty pass-catching back (Kevin Faulk, Danny Woodhead, James White, etc.) to compliment a power back and until Carlos Hyde’s senior season at Ohio State (2013), Urban Meyer had NEVER produced a 1,000-yard rusher at the running back position. Instead, he opted to utilize a power runner and a quick H-back to attack the defense from every angle. This committee is something that will generate wins for the Titans, but give headaches to fantasy owners.

So now that we’ve grieved together, let’s talk about the actual fantasy outlook for these two running backs.

As noted above, new offensive coordinator Matt LeFleur moved from Los Angeles to the Titans so he could be the main play caller. Although he was heavily involved in game planning and whatnot with the Rams, head coach Sean McVay was the actual play caller for their juggernaut of an offense. LeFleur, one of the top up-and-coming offensive minds of the league, told the media before last season that he wanted to “have a strong marriage with our running game and passing game,” meaning Todd Gurley would be on the field for all three downs. The defense could no longer “tee off” on the running back if he were only on the field for rushing downs, so it would keep the defense off-balance when Gurley remained in the game on passing downs.

Even though Henry has the ability to catch the ball out of the backfield, we’ve yet to see it consistently throughout his time at Alabama and in Tennessee. On the other hand, Lewis is the one who possesses the ability to merge both the pass and run game together — which is why The Wolf has him ranked one spot ahead of Henry. Since the Patriots had James White, Lewis was never peppered with targets, but when the game plan was scripted for Lewis in the pass game, he always came through. Don’t be fooled by his stature, Dion Lewis is a legitimate three-down back in this league.

So not only did the addition of Lewis likely take away receptions from Henry, but there’s a chance Lewis wins the job outright. If we’re going by LeFleur’s words from last season, it sounded like he wants the same back on the field for all three downs to keep the defense from knowing the play call. If Henry is primarily in on rushing downs, then exits the game for Lewis, it’s likely going to be a passing play.

Were we fooled by Henry’s elite collegiate career and his obscene NFL combine that was the mirror image of Von Miller’s performance? Not only did the prior coaching staff choose the glass object that is DeMarco Murray over Henry, but now the new staff went out and added the versatile Lewis to fit into LeFleur’s offense. The more I think of it, Henry may be pigeon-holed into short yardage and goal line duties — barring an injury to Lewis.

All in all, Henry went from a legit RB1 who would have warranted a late-first, early-second round pick, to a player who’s currently ranked among the likes of Kenyan Drake, Carlos Hyde, Alex Collins and Rex Burkhead. Sure, things will likely change once training camp rolls around and we get a better idea of how the backs will be used, but it’s extremely difficult to be optimistic about Henry right now. The former Crimson Tide bruiser may be in-line for a double-digit touchdown season, yet the chances of him fulfilling our lofty fantasy dreams are slim. Lewis carries the better fantasy outlook of the two right now and frankly, it might not be debatable.