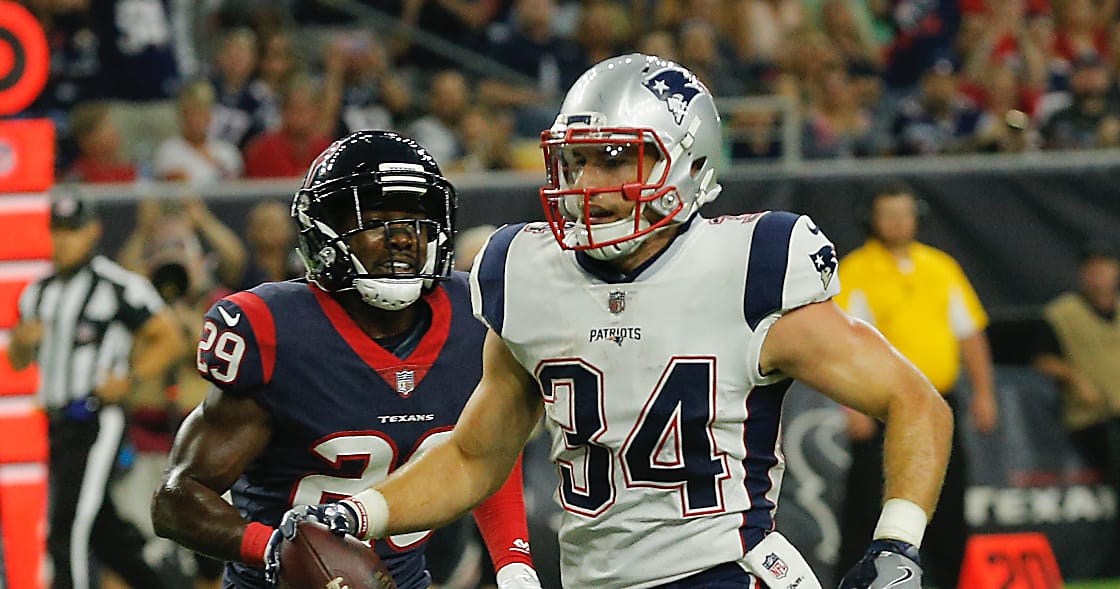 The door is open for Rex Burkhead to become a RB1 in New England.

Entering the 2017 NFL season, Patriots RB Rex Burkhead was labeled as one of The Wolf’s Penny Stocks in a typically crowded Patriots backfield. With Dion Lewis emerging from the pack as the team’s RB1, it took some time, but Burkhead was able to carve out a fantasy-relevant role. Where Burkhead asserted himself though, was at the goal line. His first rushing score came in Week 12 against the Dolphins from two yards out. He also caught a one yard touchdown pass after just getting stopped at the one from a rush. Burkhead went on to close out his 2017 season rushing for a score in each of his final four games including a two touchdown day at Buffalo.

When healthy, Burkhead seemingly took Mike Gillislee completely out of the picture as the short yardage and goal line guy. Gillislee had that huge opening game performance with three touchdowns and looked to be a force all year, but that proved to not be the case as Lewis and Burkhead manned the ship for 2017.

Now with Dion Lewis headed to Nashville after signing with the Tennessee Titans, Burkhead is in for a much larger role. His departure leaves Burkhead and Gillislee along with James White and newly signed Bengal Jeremy Hill as the team’s four backs. Gillislee was inactive for seven straight weeks and his future in New England is surely in question. White has never been a three down guy, but has always had a role in passing situations while being sprinkled in the run game from time to time. Hill used to be a force in Cincinnati, but saw his reps dwindle away to the likes of Gio Bernard and Joe Mixon. When Bernard is getting goal line reps over Hill, something strange is going on there. Burkhead seems to be the only reliable early down guy at the moment on New England’s roster. The team could add a RB in the draft, but at the moment Burkhead offers some serious three-down upside with Lewis out of the picture.

When you think of New England’s offense, you think of Tom Brady and his arsenal of receivers. The 40 year old QB just won the NFL MVP and has continued to put up all-pro caliber numbers deep into his NFL career. We all know Brady’s getting up there in age and we don’t know how much longer he’ll keep playing for. While I doubt New England begins to dial back on the passing game, a stout rushing attack would certainly help Brady and keep him on his feet. The Patriots haven’t always been known for their ground game, but if you look at their production the last two years it’s actually quite promising. In 2017, New England had 15 rushing touchdowns (6th most in the NFL) compared to the 19 in 2016 (5th most in NFL). Brady has been struggling a little down in the red zone, opening up chances for the RBs to pound it in and give fantasy owners the easiest six points we all love scoring from one yard out.

Bottom line is, at the moment Burkhead looks like the guy who would be trotting out to the huddle for the Patriots first snap of the season. Unless a drastic signing takes place or some stud back gets drafted (highly unlikely knowing Bill), the lead back job appears to be Burkhead’s to lose. Patriots RBs have historically been difficult to roster due to the unpredictability, but the past two years have shown that they are indeed incredibly valuable. Burkhead drips in sexy RB1 upside if everything lines up properly in one of the NFL’s best offenses. Belichick had this to say about his plan for Rex going into the 2017 season;

Belichick said he expects Burkhead to be capable of making an impact on all three downs and to be a four-phase special-team player. That means the Patriots view him as considerably more than a receiving back and he’ll play on the kickoff return, punt return, kick coverage and punt coverage units.

Can he truly be a three down guy? That’s up for debate as he’s never had to carry the load. However, he showed his receiving prowess throughout the season, totaling 254 yards and three touchdowns on 30 receptions. If he does get that lead role, he can probably say goodbye to his special teams snaps.