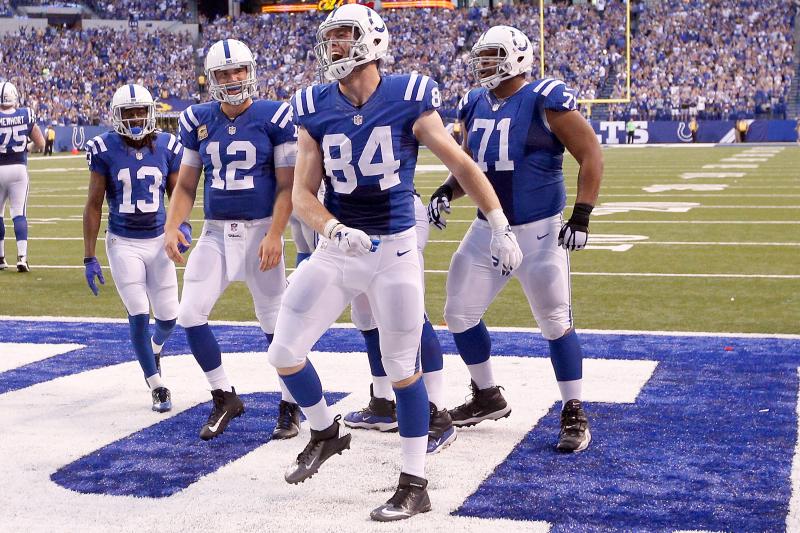 Everyone relax. Eric Ebron may not impact Jack Doyle's fantasy output as much as you think.

Coming off his first Pro Bowl appearance, Jack Doyle was poised for a bump in production under new Head Coach, Frank Reich, and his tight end friendly scheme. The fantasy world collectively cringed when news broke about Indianapolis signing Eric Ebron to a two-year contract worth up to $15 million. The 10th overall pick in 2014, Ebron remains the highest drafted tight end since Vernon Davis in 2006 (sixth overall). Despite his ability, four seasons of inconsistent play and drops led Detroit to release the 24 year-old. Nonetheless, a change of scenery could invigorate the gifted pass-catcher, which has some concerned that Ebron’s presence may eat into Doyle’s targets.

I’m here to put those concerns to rest. Frank Reich’s time with the Eagles implies there are plenty of balls to go around. Doyle saw 107 passes thrown his way in 2017, which accounted for 74.8% of the Colts’ tight end targets. In Philadelphia, Zach Ertz collected 106 and 110 targets the past two seasons, while receiving just 62.3% of the tight end target-share. This tells us that with an increased focus on tight ends, Doyle shouldn’t see a decrease in opportunities, despite other tight ends becoming more involved in the passing game.

Reich’s heavy use of the position should jive well with new offensive coordinator, Nick Sirianni, who Reich met during his time in San Diego. According to ESPN’s Mike Clay, the Chargers had a second tight end on the field for 26% of their passing plays last year under Sirianni. Under Doug Pederson and Reich, the Eagles did so on 30% of their passing snaps. Both placed top-six in that category in 2017, suggesting there is room in Indy’s offense for two productive tight ends.

So what will the Colts aerial attack look like this year? It should compare to Philly’s 2016 offense, when Reich was in his first season with the Eagles. With little depth at receiver, a whopping 185 passes were aimed at tight ends that year. Trey Burton, who just signed a four-year, $32 million dollar deal with the Bears, saw 60 targets come his way, which ranked 24th amongst tight ends that season. Yet this didn’t take away from Ertz, who tallied 106 targets and led the team with 78 receptions, 816 yards, and four of Carson Wentz’s 16 rookie touchdown passes.

Ultimately, Doyle will play the Ertz role, providing a presumably healthy Andrew Luck with a big-bodied possession receiver and go-to redzone target. Ebron will play Burton’s part, using his athleticism to create miss-matches and chunk plays between the twenties.

Doyle finished as fantasy’s seventh (PPR) and ninth (standard) highest scoring tight end while catching passes from backup quarterbacks Scott Tolzien and Jacoby Brissett in 2017. With his usage set to remain the same, the mere return of Luck should elevate Doyle’s numbers. Before free agency began, The Wolf had Doyle slotted fifth in his 2018 tight end rankings. The addition of Eric Ebron should do nothing to change that.