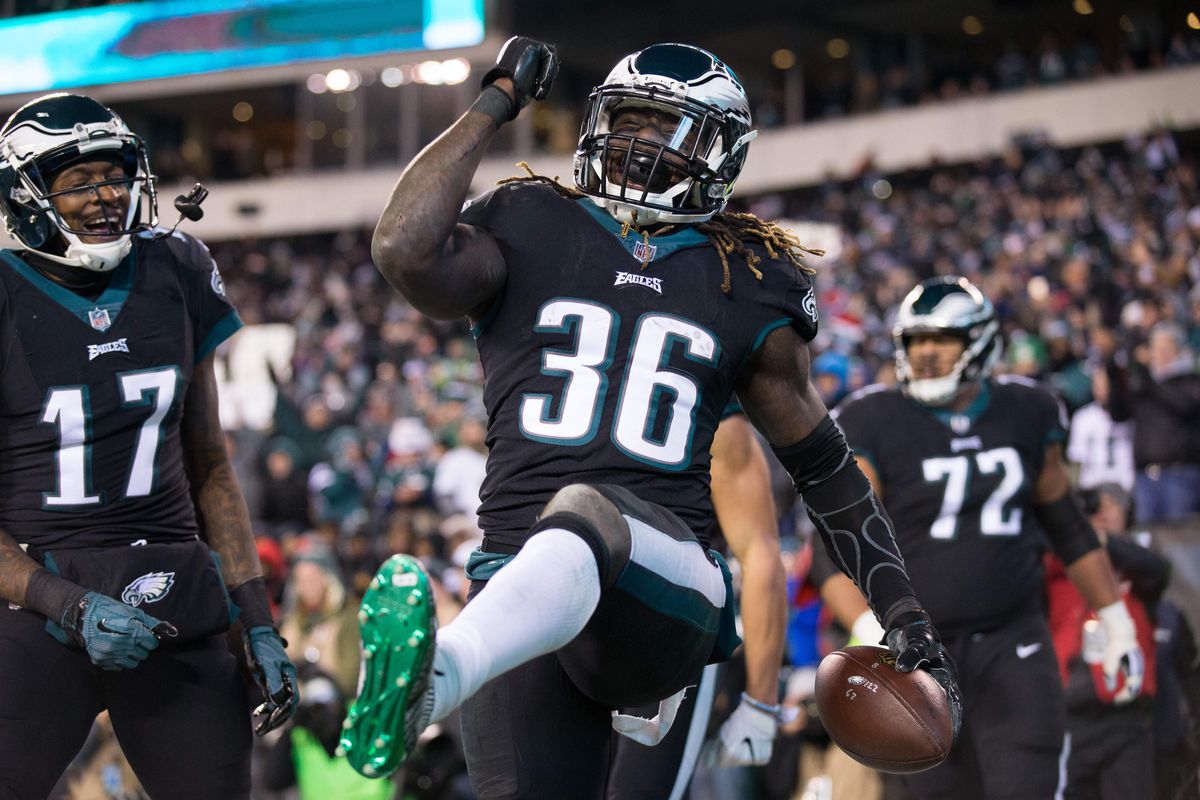 Expect a big season from Jay Ajayi with LeGarrette "The Vulture" Blount no longer in the picture.

Jay Ajayi sees his value skyrocket now that LeGarrette Blount has departed for the Detroit Lions. Ajayi’s path to 20+ touches in 2017’s highest scoring offense (29.0 PPG) just became a whole lot clearer, especially at the goalline, creating a massive fantasy ceiling no one seems to recognize.

As our Fantasy Stock Formula outlines, Talent + Opportunity + Surrounding Talent = Formula for RB1 Success.  Ajayi now emphatically checks off all the above boxes, creating one of the juiciest investing opportunities of the early offseason. With a 44th “Expert Consensus Ranking,” however,  Ajayi’s enormous upside is clearly being ignored.

Clearly and understandably, Ajayi has left a very bitter taste in the mouths of fantasy owners everywhere. Hell, he even took home our dubious “Roto Awards” for “Bust of the Year” AND “Overhyped Player” in one fell swoop. As an owner in 3/5 leagues, I’m fully aboard The Jay Pain Train.

But True Wolves must have a short-term memory and forget the pain of yesteryear. Otherwise, you’ll be blinded to the tremendous upside Ajayi (and other rebound candidates) offer in 2018. Let’s take a quick dive into Ajayi’s “Stock Profile” to emphasize just how valuable he could be in 2018:

Talent: A bruiser with surprising elusiveness, Ajayi can bull over defenders or make them miss with equal measure. He’s also an underrated receiver, especially dangerous in the screen games with blockers ahead. Despite lackluster long speed, Ajayi’s open-field vision is among the best in the game, leading to enormous chunk plays and long TDs. Simply put, Ajayi’s explosive, powerful, and slippery all at once, and it’s no coincidence he’s the only back since Ricky Williams (2002), and one of four in NFL history, to rip off back-to-back 200 yard games.

Opportunity / Usage: This is where Ajayi gains tons of steam following Blount’s departure. While Corey Clement and perhaps Darren Sproles will remain major receiving factors,  Ajayi’s early-down and short-yardage work became far clearer. Even before allowing Blount to depart, Team President Howie Roseman confirmed as much at the NFL Scouting Combine, raving about Ajayi and how he’s destined for a greater role with more scheme familiarity:

“Jay is an explosive guy,” Eagles executive vice president Howie Roseman said at the NFL Scouting Combine on Wednesday. “He can run inside the tackles. He can break it outside. (Coaches) did a great job of getting him the ball in the screen game. So he’s a young guy. He’s 25 years old. He’s obviously under contract next year. So we’re really looking forward to having him the whole offseason. In training camp. And kind of getting him more involved.

Thus, this is appears to be a rare committee that can sustain high-end fantasy value. Ajayi’s 18-20 weekly touches should yield enormous fantasy outputs, mostly because of…

Surrounding Talent: The Eagles were 2017’s highest scoring offense (29.0 PPG) thanks to a massive leap forward from sophomore signal-caller Carson Wentz and an addition of explosive surrounding pieces in Alshon Jeffery and (to a lesser degree) Torrey Smith. The points only took a slight downturn once Wentz was removed, suggesting the Surrounding Pieces can transcend just the QB position with Nick Foles returning. While Smith has departed for Carolina, Mike Wallace brings even more upside, maintaining the deep speed with more refined short-game route running. This passing offense should remain extremely threatening, while the unit promises another Top-5 scoring campaign, leading to unstacked boxes and oodles of TD opportunities for Ajayi.

Even more important, Ajayi is running behind PFF’s top-ranked offensive line. This unit is equally powerful as they are athletic, allowing creativity in blocking schemes and a heavy usage of pulling lineman to blindside defenders. It’s no coincedence the Eagles finishes with, by far, the most “trap play” yardage in 2018. Re-watch Ajayi’s first TD as an Eagle, where bonafide-stud center Jason Kelce pulls around the guard to seal off the linebacker, while the weakside blockers are all flying downfield. These types of blocking assignments, combined with Ajayi’s uncanny ability to follow blocks and find space downfield, will yield plenty more enormous gains in 2018: 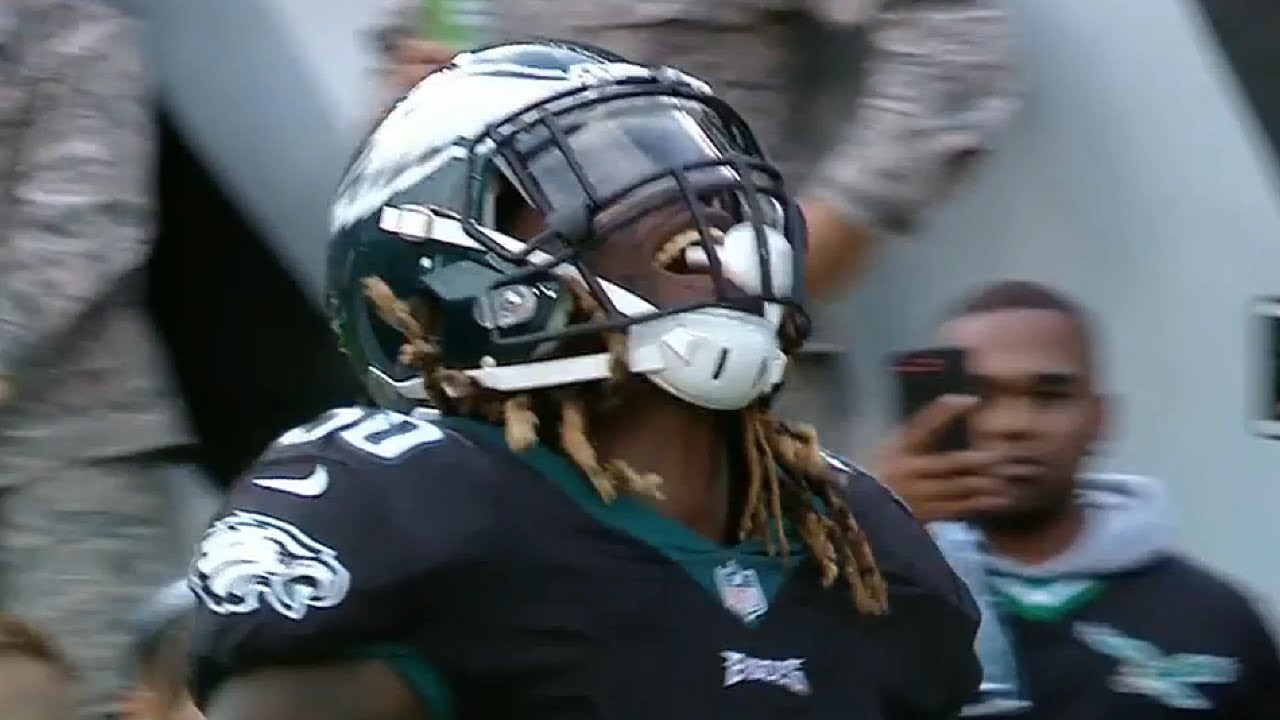 Coaching Scheme: At first glance, the “Scheme” is where Ajayi takes his greatest hit, as Doug Pederson is clearly fond of committee approaches. Yet, given Ajayi’s chronic knee concerns, a split workload isn’t the worst case scenario. Moreover, Pederson crafts such a creative, aggressive game plan that the offense constantly converts on third down to sustain drives, and generates a bevy of scoring chances. As mentioned above, Pederson is especially creative in his run game concepts, maximizing his lines unique combination of power and speed with pulls and counters. Thus, Ajayi should dominate the early down and short yardage work, resulting in 18-20 touches in this creative, explosive scheme. Risk: Here’s the major issue with Ajayi: the dreaded “bone-on-bone” knee reports. At some point, Ajayi feels likely to breakdown, yet he’s also only missed 2 games to injury over his past 32 contests — including 15 games with 287 touches in 2015. Consistency could be an occasional issue given the likely committee, but again, Ajayi should offer weekly 80+ yard and TD upside in his current role. Considering this floor comes with the ceiling of huge chunk scores each week, Ajayi’s risk isn’t nearly as imposing as it may appear.

As this breakdown emphasizes, Ajayi is an RB1 Wolf hiding in risky RB2 sheep clothing.  Even with Blount still around, Ajayi averaged 75.3 total yards from scrimmage in his 10 games with the Eagles — a 1205 yard pace in a 16 game season, which would’ve ranked 15th in the league among RBs last year. Blount’s now removed, which should, at minimum, keep this pace sustained while increasing Ajayi’s TD upside substantially. He’s set for heavy, valuable volume, behind the league’s best offensive line, amidst an incredibly explosive and creatively called attack. This is the ultimate RB1 recipe, and the bitter taste of Ajayi’s bust-filled 2017 is creating one of the best 2018 fantasy football investing opportunities. Despite being brutally burned last season, I’m hammering the “Double Down” bet here and going all-in on Ajayi yet again.