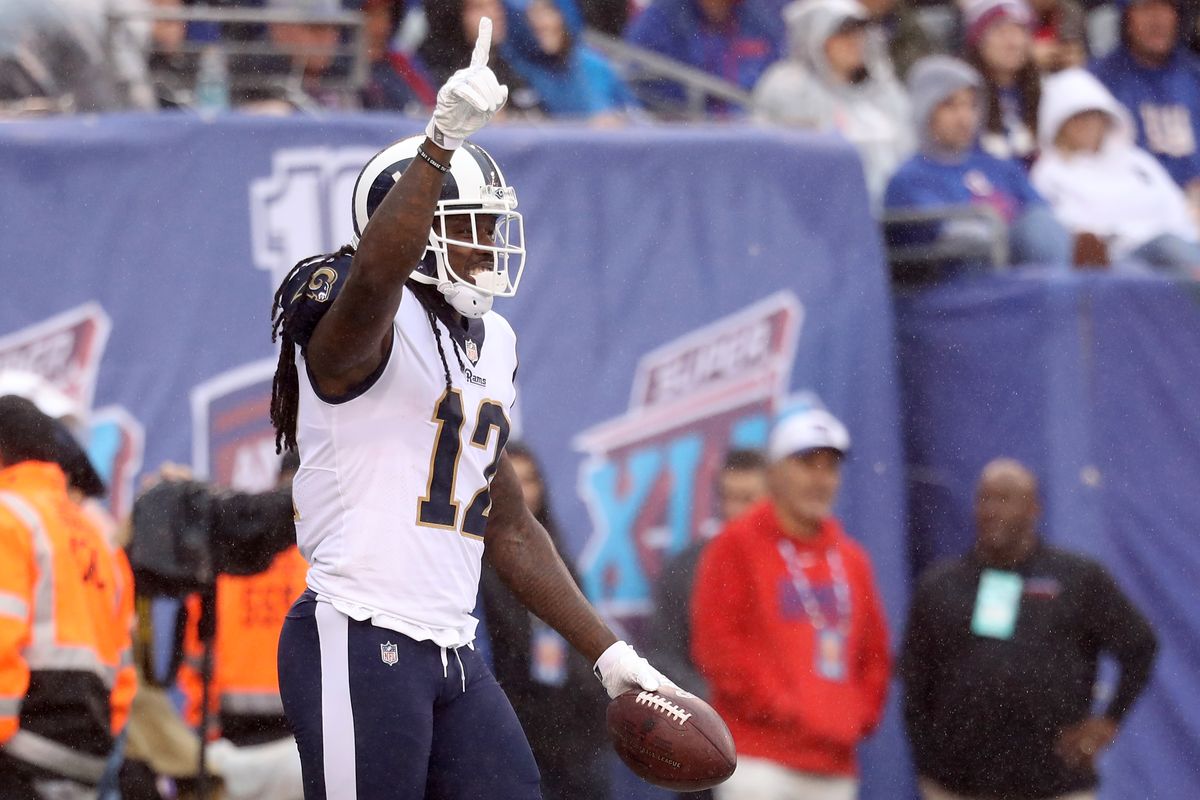 The Chiefs added another weapon for the rocket-armed Patrick Mahomes.

The Kansas City Chiefs have signed burner Sammy Watkins to a three-year, $48 million contract ($30 million guaranteed), and the Fantasy Football Implications are enormous. Below, we breakdown all the Risers and Fallers from the signing, including Watkins’ own value.

Patrick Mahomes: Another Toy for an Already Stacked Weapons Cabinet

My love for Mahomes has been brewing since well-before Super Bowl 52. Now? I’ve drawn permanent fantasy wood that I’ll never call the doctor for.

Before the Watkins signing, Mahomes was already my 92nd overall (+51 from ECR) and QB8 (+13). Though other “experts” may start to finally wake up, Mahomes will continue to ascend in light of this move, as his Top-3 upside is even more real now.

This offense already oozed in enormous fantasy football upside. Now, the combination of Watkins, Tyreek Hill, Travis Kelce, and Kareem Hunt creates arguably the most explosive juggernaut in the league. Andy Reid, one of the brightest offensive minds in the game, will have limitless ways of attacking and stretching a defense. His usually more horizontal-based West Coast offense was already becoming far more vertical with Tyreek Hill, and the big plays will only grow with a speedster like Watkins now here.

As Chiefs Insider Chris Clark details in this interview (pre-Alex Smith trade), Mahomes throws one of the league’s top balls. He can sling it deep, fit the ball in tight windows, and completes all the short throws with tremendous accuracy. As explained by Clark:

“Well I think it’s going to be very intriguing to see Patrick Mahomes start because he brought a lot to this team you weren’t able to see with Alex Smith. I don’t know if you guys watched the game he played against Denver, but he made throws that I’ve never seen a quarterback make. His arm talent is probably near the top 3-5 arms in the NFL, and I understand that’s saying a lot for a rookie but again I’ve never seen a QB make the type of throws he’s made.

With lesser natural ability and weapons, Smith was able to finish as 2017’s No.2 fantasy QB in this setup. Even more is in place for Mahomes to repeat this feat, and make a Deshaun Watson / Carson Wentz type of impact. Barring a complete faceplant by Mahomes, the sophomore signal caller will be one of 2018’s premier value picks.

Between trading away a playoff QB and stacking a loaded cast even further, the Chiefs are clearly all-in on Mahomes. You should be too.

Kareem Hunt to find even more cushion underneath

A sneaky stock up arrow belongs to Hunt, who will now find even more space to eat up receptions underneath. Dating back o the days of Brian Westbrook or Jamaal Charles, Andy Reid’s offenses have ALWAYS voluminously targeted running backs. In fact, Hunt’s 53 receptions (12th in NFL) were on the low end for Reid, and the head coach knows it, stating, “We probably need to expand on his role in the pass game.”

Those receptions will come a lot easier with Watkins clearing out space underneath. Plus, how can you ever stack the box against the run with Watkins and Hill streaking downfield? With more volume and efficiency coming here, Hunt will ideally buck some of his inconsistency trends from 2017, and put together the massive numbers he’s proven capable of on a weekly basis.

With one less, decently-sized mouth to feed, both Woods and Kupp should receive stock up arrows. Both were arguably already ahead of Watkins on the target totem pole, yet 70 targets are now up for grabs. Most valuable will be the red zone looks, as Watkins turned 11 RZ Targets into 7 catches, all going for TDs. In fact, Kupp bested Watkins by 15 RZ targets and 9 catches, but still scored one less RZ TD. Having these looks available will make both Rams WRs even more valuable in 2018.

By no means is Hill becoming someone I’ll avoid. I still love him with every ounce of my being, especially after he made me look like a genius in 2017.

In many ways, Hill actually stands to benefit from Watkins’ presence. Who do you give safety help against versus leaving one-on-one? Tyreek was already dusting defenses when seeing increased attention, and will be even tougher to stop with more single coverage coming in 2018.

Hill was never an “Alpha No.1 WR” anyways. In 2017, Hill ranked 30th with only 105 targets — less than Jack Doyle — and still finished as the WR3 in fantasy. He projects for a very similar workload, but with perhaps even more cushion. Previously my WR5, I do now have a hard time keeping Hill above Alpha Target Hogs like Julio Jones, Mike Evans, Keenan Allen, and AJ Green. Still, Hill should be trusted as a Top-24 selection, and remains someone capable of swinging a fantasy week with just one catch. Watkins’ presence may actually enhance this.

Watkins certainly isn’t hurt by the move, and in fact likely will rise a bit. For all his playcalling strengths, Sean McVay never fully utilized Sammy Watkins‘ downfield abilities. With the Chiefs tossing such enormous money at Watkins, they must envision him as a bonafide WR1, and will treat him as such. Especially after his offense was already becoming more vertical, expect Reid to use Watkins’ downfield much more in 2018, creating similar week-swinging upside to Hill. Mahomes also has a stronger arm than Goff and more mobility to buy Watkins time to shake free downfield.

Yet, even more so than LA, Watkins enters a completely loaded cast. He struggled beating out the likes of Robert Woods and Cooper Kupp for targets with the Rams, and now faces stiffer competition in Hill, Kelce, and Hunt. With so many mouths to feed, Watkins’ usage will likely be tough to project yet again. Alongside his questionable durability, Watkins remains a solid WR3 with serious upside. Yet, for all his monumental upside, Watkins has consistently proven unreliable, and just a change of scenery isn’t likely to complete reverse this.

Head coach Sean McVay has already gushed about Reynolds whenever provided the opportunity. At the NFL Combine, he raved:

You look at when Robert Woods missed a couple weeks that allowed Josh to step up. I thought he made some key conversions against New Orleans in a big win that we needed to have to kind of stay in the division race. He’s a guy that has all the traits and characteristics. He’s wired to separate. Great catch radius. So we’re excited about Josh moving forward into next year.

McVay mentioned New Orleans, one of Reynolds only games with serious action. Here, Reynolds posted a 4 rec-37 yd-1 TD line, including a few impressive contested grabs. While Reynolds might struggle for consistency, he remains an injury away from a prominent role in the 2017’s highest-scoring attack. This is well worth a late round Penny Stock investment, dripping in the upside to explode down the road.

There’s no clear losers to this deal, which is always a positive. Perhaps no one wins more than Patrick Mahomes, who sees his already-stacked weapons cabinet growing even further, and gets a weapon that perfectly matches his cannon arm. Meanwhile, Kareem Hunt will see even less stacked boxes and more cushion underneath, improving his stock in the run and receiving game. The last clear benefactors are Robert Woods and Cooper Kupp, who will see more looks, particularly in the Red Zone, with Watkins removed.

Meanwhile, Tyreek Hill and Sammy Watkins become tougher to project. Hill already thrived on only 105 targets in 2017, and Watkins’ presence shouldn’t alter that number of looks too drastically. In fact, another burner might help Tyreek shake free even more. Watkins, meanwhile, joins a QB and signal caller better equipped to maximize his talents, but the competition for targets is even fiercer here. He’ll likely remain a huge upside, but volatile product in 2018.