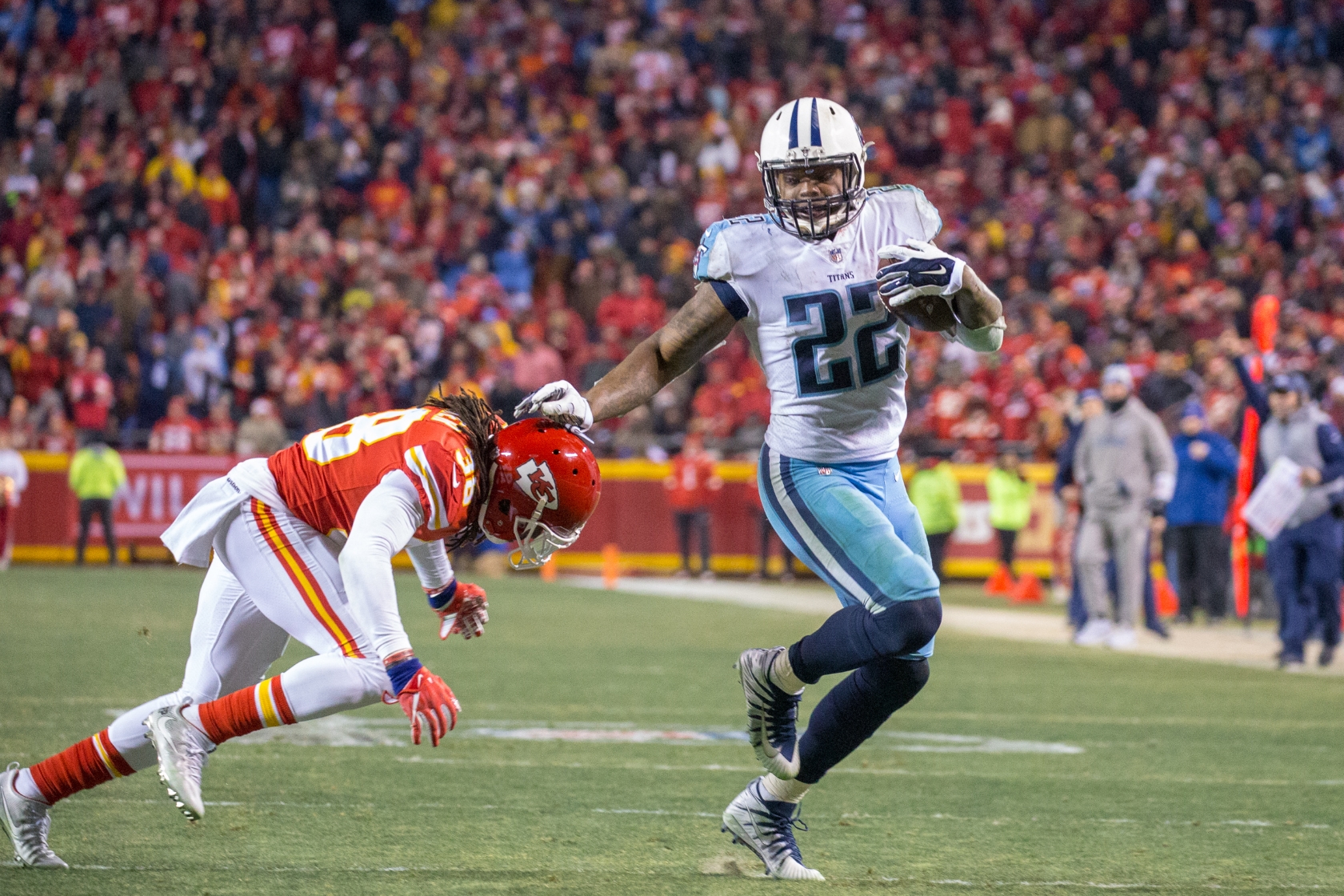 With DeMarco Murray no longer in the picture, it's Derrick Henry's time to dominate as a high-end RB1.

DeMarco Murray‘s corpse was cut by the Titans on Thursday, finally making the (wet) dreams of fantasy football everywhere come true: Derrick Henry‘s cage door has finally been unlocked. Though the massive steamroller may have frustratingly rotted on our benches for the past two seasons, it’s now his time to bulldoze league as the Tennessee Titans bell-cow (and new OC Matt LaFleur‘s next Todd Gurley), creating Elite RB1 upside in the process.

The Long but Promising Road Here

It’s safe to say that, perhaps more than any other site, the Roto Street Journal has been driving the Henry Hype Train since he was bending over defenses at Alabama. We couldn’t contain our excitement at the NFL Combine when he literally mirrored Von Miller’s size, speed, strength, and explosion measurables. Imagine Von Miller hammering your defense 20-plus times per game?

Unfortunately, Henry landed in Tennessee just a month after Mike Mularkey signed DeMarco Murray to feature in his ‘exotic smashmouth’ offense — it’s safe to say we all went from midnight to six. That did not last long though. The Wolf then decided to go against the so-called “experts” by calling it an investing opportunity for both Murray and Henry. The small-brained Jamey Eisenberg went as far to say that Murray should not be touched until at least the SEVENTH round.

But this is where the Fantasy Football Stock Formula comes in. Little did the “experts” know that the RB1 in this offense would feast in the ‘exotic smashmouth’ scheme, Mularkey notorious for always rding his bell-cow. Wolf knew this and was so enamored with Henry, he labeled him “2016’s Next David Johnson” — a high-upside bench stash who evolves into a RB1 by the stretch run.

Unfortunately for us, Murray’s glass body didn’t break until the very end of year two and we were never able to get a string of games with Henry in the backfield. Yet, it was clear that Murray straight up dominated in that system in year one — racking up 1,287 yards, 12 total touchdowns and 53 receptions. Good call, Eisenberg.

Yet, in limited action, there have been many glimpses of this beast’s greatness whenever afforded the opportunity — none more prominent by his 191 total yard, 1 touchdown effort in the 2018 Wildcard Round vs the Chiefs.

And so we’ve waited, counting the seconds until the news would break that Murray was released and Henry had finally been unshackled. Then Ian Rapoport tweeted this late Thursday afternoon:

The #Titans have released RB DeMarco Murray. They are going with Derrick Henry as their lead back

Ok, ok. Enough talking about what could have happened, and let’s talk about what we expect from Nick Saban’s former workhorse in 2018 and beyond.

At the NFL Combine last week the media peppered Titans GM Jon Robinson about Henry. It was pretty obvious from the handful of quotes that the team knew Henry would be the guy in 2018 after the way he finished his sophomore campaign.

When asked about what he thought about his sophomore season with the team, Robinson hinted at an every-down, workhorse type of role:

“He did a nice job. He had some really strong runs for us, and had some good play time during the season, too. The game here (vs the Colts in 2017) he kind of grinded it out there and kind of sealed it for us. His performance in the playoff game on Kansas City was a good one. We are glad Derrick is on the football team and look forward to handing it to him, throwing it to him, and getting it in his hands so he can make yards.”

Even though the ‘exotic smashmouth’ will no longer be in play next season, Henry will now be featured in an offense led by up-and-coming offensive genius Matt LeFleur — former offensive coordinator of the Rams.

Although LeFleur did not call plays under Sean McVay last season, he was instrumental in all facets of the offense, emphasizing early on the importance of “merging the running and receiving game” and facilitating a historic fantasy campaign from Todd Gurley.

Enormous for Henry, LaFleur has already suggested this same blend of the running and passing game will be the foundation of his Tennessee scheme, opening the door for a Gurley-esque role:

Meanwhile, Robinson suggested Henry will fit this scheme like a glove, noting many similar traits that helped Gurley dominate in 2018:

“He is a bigger back as we all know, and has really good speed in the open field,” Robinson said, when he was asked how Henry would operate in LeFleur’s zone scheme. “He is a guy who can get downhill, and he has the ability to pick and slide and get up in a crease. So we are looking forward to him getting back, and working with him in the new offense.”

With no other resemblance of a legitimate NFL back on the Titans current depth chart, Henry will be in for LaFleur’s three-down role. This creates the question — can this bulldozer catch?

Although Henry wasn’t asked to catch the ball much out of the backfield in college with both TJ Yeldon and Kenyan Drake in the same backfield, a lack of utilization shouldn’t suggest a lack of ability. At Alabama’s Pro Day, Henry wowed scouts with a dazzling receiving performance after stepping in and going through receiver drills when the event didn’t have enough wideouts:

“The scouts on hand were ecstatic over how well the 2015 Heisman Trophy winner caught the ball. Henry stepped in and showed that he has real good route-running ability, and that is just another skill that he possesses that people didn’t realize that he was so good at. Henry really helped himself out at the pro day.”

Robinson expressed his agreement that Henry, who has averaged over 10 yards per reception over his career, is plenty equipped for a versatile horse role, emphasizing he’s grown as a pass-catcher:

“Yeah. I think he is catching the ball better – I thought he caught the ball better this past season than he did his rookie year…”He is obviously a little more acclimated to the pro game even though those Alabama teams, there’s quite a few pro players on those teams. Yeah, I think he can be a guy we can hand the ball to, and throw it to.”

Primed for a three-down role in the same scheme that facilitated Gurley’s enormous season, Henry has the makings of a bonafide RB1. Indeed, Free Agency and the NFL Draft could bring some hurdles, as the Titans are sure to add depth to their backfield, and have been commonly tied to Jerick McKinnon so far. Even still, Henry is in line for at least 300 total touches, and could not be in a more prime position to prove why we’ve been doubling down on his upside since he entered the league. The Wolf is preparing a new Big Board, and has already informed me Henry will undoubtedly land in his first round. Tune in to see exactly how when it drops this weekend.