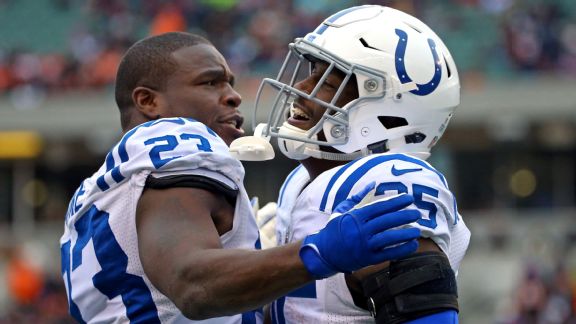 If you're looking to board the Marlon Mack hype train, don't get on.

Q: Can he carry the load?

Frank Reich: “We’ll have to evaluate that as we go.”

Long time NFL and Fantasy journey man Frank Gore is apparently on his way out of the Indianapolis Colts organization. Both Colts GM Chris Ballard and new HC Frank Reich expressed they plan to part ways with Gore and allow him to explore free agency on his own.

Frank Reich said Chris Ballard had long talk with Frank Gore after the season. 'Out of respect for Frank' sounds like Colts told him he won't be returning for 4th season

In his winding years, it makes sense the team wants him to be a part of a winning franchise and have a shot at a Super Bowl ring. It makes sense for everyone, and whoever scoops him up will probably be getting more production than they initially thought from the 60 year old — as is tradition.

The important takeaway from this, is that 261 carries, 961 yards and three scores just walked out the door. That production needs to go somewhere, but to who? Most fantasy minds would be quick to label Marlon Mack as the heir apparent. Mack was a stash at the end of fantasy benches this year with all his owners begging for Old Man Gore to go away once and for all. Mack flashed potential in his limited work with speed and elusiveness out of the backfield. His 3.85 ypc was slightly better than Gore’s 3.7, and only really stood out on a 9-91-1 stat line against the 49ers — who didn’t run well against them?

So how does the Colts organization view Mack’s future role as the Colts back without Gore moving forward?

Colts GM Chris Ballard had this to say when asked about Mack:

“We think the draft is good. We kept Matt Jones around for a reason. We think Matt Jones has got potential. We thought really at the end of the year during practice Matt Jones was coming on really well. We like what he has. Then we’ve got (Josh) Ferguson, who can be a mis-match back. We think we have three options on the team that are pretty good. We’ll see how the draft and free agency works out.”

Not very encouraging words there for Mack from his general manager. Ballard pumped former Redskins castoff Matt Jones, along with Josh Ferguson, while ignoring Mack. And don’t forget about Robert Turbin as well likely coming back from injury. The Colts really liked him for some weird reason, and he had a lot of vulture tendencies.

“I like Marlon. I remember grading Marlon when he came out, I had high marks on Marlon. I thought he was a good explosive runner, good short-area quickness, seem like an aggressive runner. Obviously the evaluation process is ongoing on how he fits here.

Then Reich was asked if he thought Mack could carry the load.

He responded, “we’ll have to evaluate that as we go.”

Slightly better than Ballard, but nothing to write home about. I would highly doubt the Colts open their season with Mack touted as their bell-cow back ready to step right into Frank Gore’s shoes. With their abundance of options in the backfield, paired with an extremely talented RB draft class, Mack’s future status is a dark cloud. It’s not a promising look, for a player many people thought would have serious potential given the circumstances in 2017.

Currently sitting at RB35 in The Wolf’s latest Big Board, he was labeled as one of the highest penny stock options for 2018. It will be interesting to see how this and the draft will change Wolf’s view moving forward.