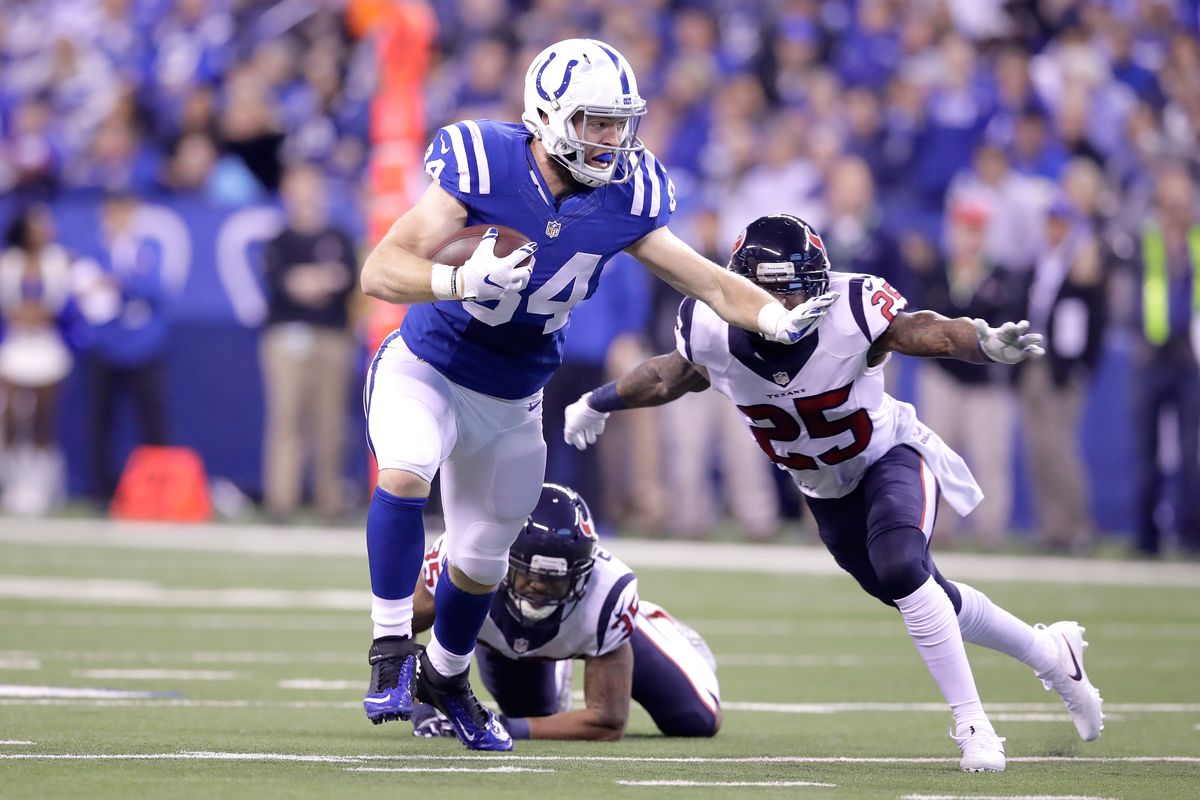 “I think Jack is an excellent football player and will fit well into the system and what we do, like a Zach Ertz (in Philly). I’ll have to learn all the things Jack can do as we evaluate him and move forward.”

Anytime a new coach takes the reins, his team goes through a transition. New schemes, new philosophies, and inevitably new players will all collaborate in an effort to out-produce the last regime. After spending the past four seasons as an offensive coordinator for the Chargers and Eagles, Frank Reich has been named the head coach of the Indianapolis Colts. He inherits an offense that averaged just 20.8 points per game under former offensive coordinator, Rob Chudzinski.

Chud’s eventual downfall was his inability to keep the offense rolling without star quarterback, Andrew Luck. The Colts averaged 27.8 points per game during the 16 contests in which Chudzinski had Luck on the field. However, that number plummeted to 16.7 in the 24 games that Chudzinski was forced to start a different quarterback.

After putting up 31 PPG in thirteen games with Carson Wentz last season, Reich managed to keep the offense buzzing after his quarterback’s injury. Philadelphia averaged 29.4 PPG in the five full games that backup QB, Nick Foles played (including post-season). These numbers ought to encourage Colts fans, who should have trust issues regarding Luck’s return after last year’s shoulder surgery debacle. To this point, Luck still isn’t throwing the football, leaving open the possibility that Jacoby Brissett could once again be called upon to start.

Regardless of how the quarterback situation plays out, Indianapolis’ offense will look drastically different in 2018. Though Nick Sirianni has been named the Offensive Coordinator, Reich has announced that he will take command of the play calling duties, something he hasn’t done since his time in San Diego, where he met Sirianni. Reich described what his offense will look like at his introductory press conference.

“We will be a multiple attack, up-tempo offense,” Reich said. “We will be aggressive. We will change things up. What I mean by multiple is we’ll use multiple personnel groups and multiple formations. Being able to run the same things over and over again and disguise it so other teams don’t know what we’re doing. We’ll keep them off balance with run and pass. We’ll change the tempo. There will be a strong element of the no-huddle offense”

An “up-tempo offense,” is a Frank Reich staple. The faster an offense operates, the more plays they are able to run, leading to more opportunities for players. Reich’s offenses have finished third in total plays from scrimmage each of the past three seasons.

In back-to-back seasons, Doyle has finished second on the Colts in passing targets, and should continue to be highly involved under Reich. In Reich’s four years as an offensive coordinator, his starting tight end has never finished worse than third in team targets.

Doyle’s 6’6” frame helped him pull in a team-high 80 catches in 2017. Only Travis Kelce snagged more receptions (83) from the tight end position last year.  Doyle will likely continue to lead the Colts in receptions under Reich, as Zach Ertz was Philadelphia’s reception leader in each of Reich’s two seasons there.

Without Luck to push the ball down the field, Doyle saw his yards per catch dip from 9.9 in 2016 to 8.6 last year. This is an area where Reich’s presence should help Doyle, with or without Luck. Reich’s starting tight end has never averaged fewer than 10.5 YPC over the course of a season. Ertz led the Eagles in receiving yards in both 2016 and 2017 under Reich.

Doyle’s four receiving touchdowns tied TY Hilton for the team lead last season. This number should increase under Reich’s leadership as well. The starting tight end in Reich’s offenses has either finished first or second in receiving touchdowns in all four of his years as an OC. Doyle’s touchdown total will flirt with double digits in 2018.

Overall, between Ertz and Antonio Gates, Reich’s starting tight end has averaged over 69 catches, 772 yards and 7 touchdowns per season across a four year span. For fantasy purposes, those numbers would have finished fourth amongst tight ends last season in both PPR and non-PPR leagues. Though Ertz and Gates are highly skilled in the receiving department, Doyle is talented in his own right, and was elected to his first Pro Bowl is past year. With Reich’s guidance, Doyle will further his status as one of the most productive tight ends in the league.