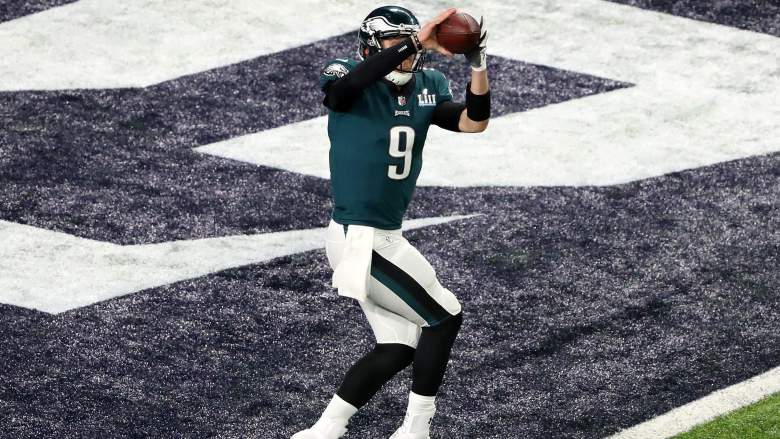 After a rough postseason of picks, Keegs bounced back with a monster prop bet showing.

Well, as I’m sure you already know, the Eagles dropped 41 points Sunday night and won the Super Bowl 41-33. Yes, I picked the Pats and yes, I’ll be facing the music for that and my entire God-awful postseason of picks in due time. Just gotta be patient. Time heals all wounds, and I need quite a bit of it to close up this giant gash Matt Patricia’s disgusting gameplan just left in my soul.

But hey, good news: I did much better on my props. With a 10-6 showing on my 16 prop predictions, I’d like to think I made up for a disgusting playoff showing overall. So let’s see just how I did.

Pick: Over; Result: Under

Not gonna lie, I was real confident in this one. Luke Bryan went over 2 minutes last year, and there was no doubt in my mind Pink would as well. 2 things in particular got in my way: 1st off, she got sick. Reports started flying towards the end of last week that Pink was battling the flu and it could impact her performance. When this came out, I actually doubled down: I really didn’t think it’d make a difference, and I thought if anything we’d get a Jordan Flu Game out of her and she’d take even longer than before. Which brings me to a point I should make — Pink did a solid job. Not A+, but considering she wasn’t 100%, very serviceable anthem. I bashed her a bit in my picks and haven’t particularly been a fan of her in the past, so I thought I’d throw that out there. Anyway, the other thing that went against me was Pink coming out with a band. The rumor heading into the game was that she’d go A Capella just like Luke Bryan had, but when she came out with a band my heart dropped. I personally think the anthem just sounds better without music, but it definitely doesn’t help when hoping for a long anthem. With a band playing the singer has to stay on their timing, and even though Super Bowl anthems typically run long because of the magnitude of the event, the song naturally finishes up prior to the 2-minute mark when played by an orchestra. No matter, can’t win ’em all.

0-2 on the anthem, not a great start. My logic on this one was that since Pink is an avid Eagles fan, she’d do something in her anthem to show that loyalty. But to my surprise, she remained professional, not wearing any birds gear or saying anything to pump the team up. And as far as her attire, she went with a pretty conservative silver suit and matching white/blonde hair. Pretty boring, if you ask me.

Had a 50/50 shot on this one (give or take). Always been a tails-never-fails guy, and with the previous 4 Super Bowls starting with tails tosses (after 5 straight heads before that), I figured we’d just finish out the pattern. Shows what I know. Terrible start here, but it gets better.

This one was about as easy as it gets. Should’ve been a 0.5 over/under, truthfully, but we’ll take what Vegas gives because they don’t typically give much. People are apparently still pissed that JT got invited back this year while Janet Jackson is still shunned, which makes sense I guess, but they’re forgetting 1 thing: JT is an international superstar right now. Janet had a good run, but she’s old hat. But regardless, their last performance together was a big black spot for both the NFL and the networks, and there was no chance this phrase was sneaking into the broadcast more than once. Easy money.

Another over/under that seemed real high to me. I feel like the under on “shown on broadcast” types of props are always safe picks, because we choose so many things to be shown while ignoring the main part of the broadcast; y’know, the game. Plenty of references to the previous matchup, but 3 separate clips was an uphill battle here.

Pick: Over; Result: Over

Full disclosure, I’m not 100% certain on this one. Monday morning I wanted to alleviate my pain by confirming my correct prop picks so I kept searching for them, but there’s a few that aren’t out there anywhere. Honestly, as far as comprehensive lists of prop bet results from this Super Bowl, to my knowledge I think I might be writing the first one on the Internet. Big J over here! But just from watching the game and listening to Cris Collinsworth’s nonsense for over 3 hours, I’m positive Brady being 40 years old came up at least twice, especially while he was torching his own Super Bowl records. Taking a W here.

Pick: Over; Result: Over

Another real easy one. This one was covered in the middle of the 3rd quarter, and they showed her 2-3 more times after that. It’s simple marketing, people. NBC is smart. They’re aware that people who watch football also typically like looking at beautiful women. Honestly I think Giselle got more airtime than both team’s punters combined.

Pick: No; Result: No

People… c’mon. Yes, Nick Foles played a solid game. Worthy of a Super Bowl MVP. He impressed a lot of people, as well as virtually guaranteeing himself a giant contract as the future franchise QB in Cleveland or New York. But there was no way he was topping Brady in passer rating in this one. There was no way Brady was going to come out in this game and lay down a stinker, not after all that Tom vs. Time stuff and all the bullshit he put up with from Week 1 in Foxboro till Sunday night. Don’t overthink it, folks: when you have the chance, bet on Brady (not necessarily his teams, but him for sure).

Pick: No; Result: No

I’ve seen a little debate on this one, but let’s be very clear: neither Philly’s TD pass to Foles or New England’s incomplete attempt to Brady were flea flickers. A flea flicker is a snap to QB, handoff to RB, flip back to QB. What happens from there can go one of a billion ways, but that’s the important part. So while the “Philly Special” was an instant classic and New England’s attempt was fun too (for the record, Julian Edelman completes that pass 100 times out of 100), we didn’t get a flea flicker on Sunday. Another dub.

I said right off the bat it didn’t make sense that the Patriots were the favorite in this category, and I stayed steadfast with Philly. And, of course, they got the ball first and drove down the field for the 25-yard FG. The Pats love to defer and love to start slow and give their entire fan base heart attacks as they fall to double-digit deficits in every meaningful game ever, so this was an easy choice for me. But read on and see just how perfect I am.

Going by our odds on this one, a Philly FG yielded the highest return on this prop outside of safeties, which were +3300. Here’s my exact prediction for this one:

The Falcons started last year’s game off with a rushing TD, but they had a much more dynamic offense than Philly’s this time around. I’m thinking the Eagles put a decent drive together but stall before the red zone, and Jake Elliot nails one from a decent ways away to take an early 3-0 lead.

Yeah, Philly got a little closer than I predicted, but a false start and a few stops later and Elliot was giving them a 3-0 lead nonetheless. Anotha one.

When the Patriots won the toss and deferred, I almost just marked this down as a win before the game even started. Everyone and their mother knows how much Bill loves his double score, and it was a virtual guarantee once the coin toss happened.

Then, of course, it ended up being Philly to drive down the field in the final minutes and tack on a TD with 38 seconds remaining in the half. Woops. Either way, another win here.

This over/under opened up at 12.5 before dropping to 11.5 later in the week, but I was all over the under from the start. The teams combined for just 5 penalties in their Conference Championship wins, and there was no way they were going to be drastically less-disciplined as the stage got bigger. The Pats made it 2 straight games with just a single penalty against them, with a 1st quarter false start by Rob Gronkowski as the only blemish, and Philly tacked on 6 of their own to seal the under. Like I said, you don’t get this far in the season if you’re undisciplined and getting called for stupid penalties. Easy money.

I had my reach picks for this one as Danny Amendola and Zach Ertz (who had 15 catches and over 200 yards between them, so I wasn’t totally off), but my safe bet was Brady. Y’know, the guy who threw for over 500 yards, 3 TDs, and 0 INTs. It’s rough because he was the guaranteed MVP if the Pats had won, and honestly it would’ve been a little justified to make him the 2nd-ever player to lose the Super Bowl and still get MVP honors, but Foles deserved it. He stepped up in a big moment, delivered when many thought he couldn’t, and got a nice new truck and a trip to Disney out of it.

I went with blue here because I was expecting a Patriots win and it lined up with the blue Gatorade dump from Super Bowl 49. I also told you to lean towards clear or orange for a Philly win, since clear was the most common and orange was typically the choice of NFC winners. Well, turns out I can’t tell the future. I know, I’m as shocked as you are.

This was another pick dependent on Brady winning, as he’s usually a team-first guy, but as we know, Foles beat him out. If Carson Wentz played in this game I’m sure God would’ve been the front-runner for this prop, but Foles surprised a lot of people with the “All glory to God” right off the bat. Turns out Wentz has the whole team brainwashed. Hallelujah.

And so, after a pretty terrible postseason of picks, at least I was able to end on a high note. Sorta. By my math, if you put $100 on each pick I put here at their given odds, by game’s end you would’ve made just under $600. I’ll take that any day of the week. Like I said, I’ll be addressing my Patriots -4.5 pick at a later date, but for now, let’s just take some time and mourn the loss of the 2017-18 NFL Season. RIP.