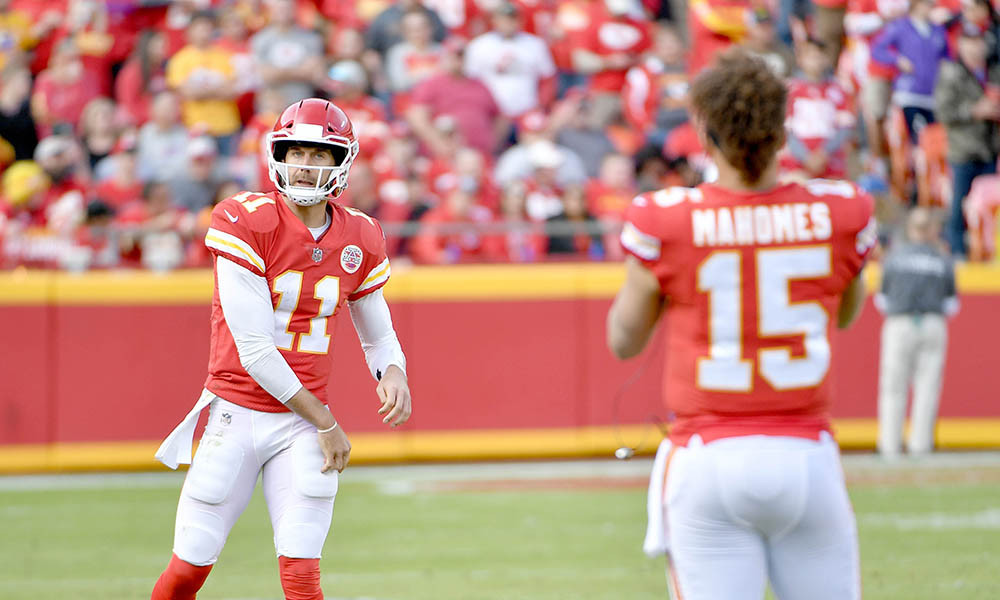 We breakdown the major fantasy football implications of the Alex Smith trade to the Redskins.

The Alex Smith era is officially over in Kansas City, as the Chiefs have agreed to deal Smith to the Redskins for a third round pick and cornerback Kendall Fuller — PFF’s No.6 graded CB and top graded Redskin. The move also frees up $17 million in cap for the Chiefs while, more importantly, ushers in the Patrick Mahomes era. If he reaches his upside and the team maximizes their expanding cap room (line help, pass rusher, and Jarvis Landry, anyone?), the Chiefs could be terrifying. From a fantasy football perspective, the ceilings just became limitless.

The move also means that the Kirk Cousins franchise tag saga is coming to an end in Washington, and will be the most sought after free agent on the market. We’ll dive into the implications on the Redskins later, but for now, we’re focused on the limitless upside of the Chiefs, particularly Mahomes and Tyreek Hill:

Sources tell The Star that the Chiefs have reached an agreement to trade Alex Smith to Washington. The story: https://t.co/vlNuGMAlVS

QB Alex Smith and Washington now have reached an agreement on a new four-year contract extension, per sources. Smith, who had one year left on his contact, tied to Washington for next five seasons. Smith gets long-term deal from Washington that Cousins could not.

With Smith no longer in the picture in Kansas City, this means that stud [soon to be] second-year quarterback Patrick Mahomes will get his chance to run Andy Reid’s offense. An offense that is oozing in fantasy football potential with high-powered weapons scattered all over — highlighted by Tyreek Hill, Kareem Hunt and Travis Kelce. Hell, Alex Smith was the No.2 scoring fantasy quarterback in this incredible set-up, and Mahomes drips in so much more natural ability. A Deshaun Watson / Carson Wentz type of impact isn’t without question.

Alex Smith has been traded to the Redskins, which unlocks huge upside for Mahomes and Tyreek Hill.

Even before the trade, we were raving about Mahomes and Hill. Just last Saturday, The Wolf has declared himself “already all-in” on both Mahomes and Hill, and we were able to talk to Chiefs insider Chris Clark on The Fantasy Fullback Dive about the quarterback’s potential before this trade ever materialized.

“Well I think it’s going to be very intriguing to see Patrick Mahomes start because he brought a lot to this team you weren’t able to see with Alex Smith. I don’t know if you guys watched the game he played against Denver, but he made throws that I’ve never seen a quarterback make. His arm talent is probably near the top 3-5 arms in the NFL, and I understand that’s saying a lot for a rookie but again I’ve never seen a QB make the type of throws he’s made.

Mahomes is dropping back, he has Von Miller rushing at him and this is the fourth quarter, tie ball game. He had just got put back in because Tyler Bray had fumbled away a snap Denver returned for a touchdown. Tied ballgame. Mahomes is dropping back, sees Miller coming, spins around goes off to the right and as he’s getting hit by a linebacker right in his chest he throws a probably 25 yard pass between three defenders that hits DeMarcus Robinson in the numbers. He catches it and goes out of bounds to continue the drive.

Another throw earlier in the game, he didn’t have his feet set. He had a defender wrapped around his legs, and throws a 15-yard dart to Albert Wilson for a first down on 3rd-and-12. Those were two throws I’ve never seen a QB, especially in a Chiefs uniform, make.”

Tyreek Hill over Julio Jones is even easier now

Not only is Mahomes high on The Wolf’s radar for 2018, but he’s going all-in on Hill again, even going as far to state that he would rather have Hill over Julio Jones in ’18.

The Wolf went on to say, “While no one can complain of Smith’s 2017 efforts, Mahomes’ upside is far greater. We’ve seen how dangerous QBs who have the mobility to buy extra time can be in freeing up their deep threats. No WRs gained more deep separation than Hill in 2017, and now he’ll have even more time to do damage, with a QB who can rope it even farther.”

With those explosive weapons surrounding the sophomore gunslinger, expect fireworks in Kansas City.