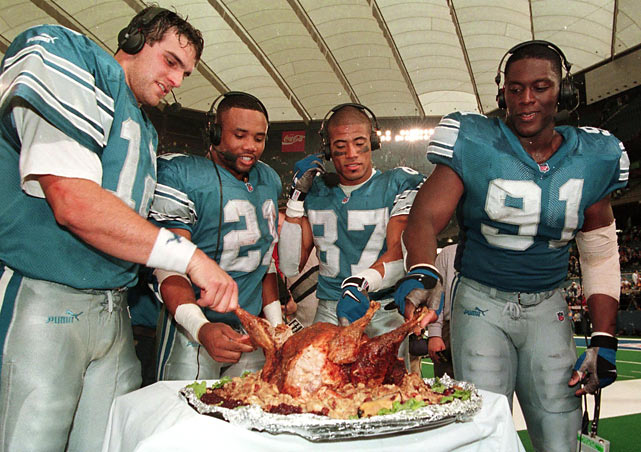 Captain Kirk has been in back to back shootouts which has helped to boost his stats to great levels. While a matchup against the Giants isn’t likely to be back and forth, Cousins should have no problem ripping them apart and putting up 20+ once again.

I’m most excited to watch this game on Thanksgiving between the Vikings and the Lions in an NFC North battle. This contest appears to have a game script that favors McKinnon more than counterpart Latavius Murray where Case Keenum utilizes the smaller RB out of the backfield in the passing game.

Perine stepped in for the injured Chris Thompson and performed beautifully with a large workload. He averaged 5.1 yards per carry on 23 attempts and even found the end zone. It’s usually a good idea to target RBs who are playing for heavy road favorites as the game script usually leans heavily in their favor being up large as is the case with Washington this week.

Captain Consistency continues to have 5+ catches in every game this season, and as we saw last week he’s become a key weapon when the Vikings are in a heated contest. This will be a tough test for Minnesota on the road in Detroit, but Thielen’s heavy usage and high target volume keep him in play this Turkey Day.

Last week we saw the Keenan Allen we all love and know which was quite the site to see. The Dallas Cowboys are really struggling at the moment and were just eviscerated by the Eagles on SNF. They look ripe for the picking against one of the NFL’s better receivers who got back to the sky high target numbers we were used to seeing on a normal basis.

The Terrelle Pryor news was big for Crowder as the receiving game now belongs to him and Josh Doctson going forward. While Doctson is the more deep threat and big play ability guy, Crowder is the one racking up targets and receptions over the middle. With his usual production line, if he finds the end zone it will be a point stuffing day for him.

In the chart we trust. Always start opposing tight ends against the Giants. Simple enough this week after Jordan Reed was ruled out and Davis has been a consistent weapon in the team’s offense.

Here’s the one kind of meh pick where I’m hoping for some kind of explosion or home run to really put this lineup over the top. Abdullah works in both the Lions passing and running game and his hit double digit points in three straight games. As long as he can find the end zone at least once and turn in solid to decent rushing/receiving numbers, then he should pay off his rather low salary.

I’ve been a fan of the Chargers defense for awhile now thanks to their elite pass rush with Joey Bosa and Melvin Ingram, along with having a shut down corner in Casey Heyward. As I mentioned earlier, Dallas is in shambles now especially after the suspension of Ezekiel Elliott. They can’t get anything going on the ground, and Dak has been struggling with his receivers getting locked up and failing to get any separation from corners.