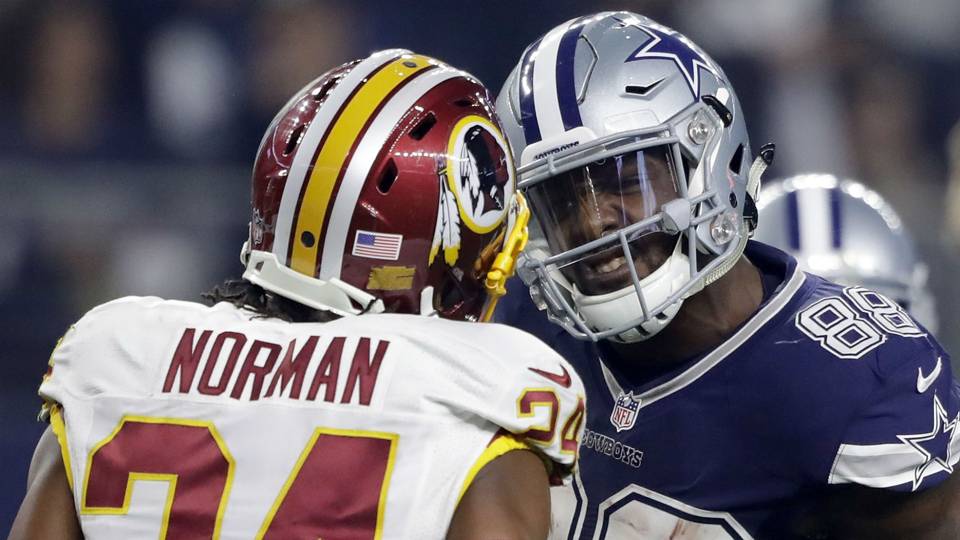 Who has the edge on the perimeter in Week 8?

Breaking down the key perimeter matchups for Week 7.

If you saw what Amari Cooper did to Terrance Mitchell, you’ll want to look at Demaryius Thomas this week. Terrance Mitchell has given up 596 yards and five touchdowns so far this season. Those numbers are good enough to be the fantasy WR 2 behind only Antonio Brown. Thomas lines up on the left (or, the Terrance Mitchell side) 49% of the time, so he’ll have plenty of opportunity to take advantage, especially since it looks like Emmanuel Sanders will be sitting another week. After that embarrassing loss to the Raiders, Marcus Peters has now given up 221 yards and three touchdowns in coverage this season, so he’s not exactly bulletproof either. The Chiefs defense gives up yards and scores.

Terrance Mitchell has been targeted 65 times, yielding 597 yards and 5 TDs. Among non-AB WRs that'd be

Who will win the battle of elite trash talkers?

If Josh Norman is healthy enough to play, it could be incredibly exciting from both a skill standpoint and a trash-talking standpoint. Norman and Dez Bryant are both big mouths who have a knack for getting in each other’s faces. Norman is also incredible in coverage and Bryant struggles against top CBs. The issue is that Norman lines up across from the WR on the right side 97% of the time and Bryant only lines up there 27% of the time. It will be interesting to see if the Redskins employ a shadowing strategy where Norman follows Bryant around the field. They’ve shied away from shadowing before but if Bryant is abusing Brashaud Breeland, they may have no choice. The last time the Redskins had a healthy Josh Norman for a full game, they held Derek Carr to 118 passing yards. If fully healthy again, this could be quite an intriguing matchup. Kendall Fuller has also been exploited as the slot CB, and Dak Prescott will likely look to Cole Beasley if Bryant isn’t creating separation.

What will the Steelers do with JuJu?

Scott Barrett put out a tweet saying that against the Lions, when WRs are targeted outside, QBs have a 93.2 passer rating, but only a 66.3 passer rating when targeting the slot – credit here goes to Quandre Diggs. JuJu Smith-Schuster is developing a nice chemistry with Big Ben Roethlisberger while it seems that Martavis Bryant is falling out of favor. The question is, with Martavis Bryant inactive this week, will Smith-Schuster be moved to the right side or will he stay in the slot where he lines up 73% of the time? If he’s moved to the outside, he’ll be covered primarily by D.J. Hayden or Nevin Lawson, both of whom are graded around a 43 by Pro Football Focus. If he stays in the slot, however, he’ll face Quandre Diggs who currently ranks as the 8th best slot CB in the league in terms of cover snaps per reception.

Taking advantage of the slot

This week we have two of the league’s best slot receivers – Jarvis Landry and Nelson Agholor — going up against two of the league’s worst slot corners — Lardarius Webb and K’waun Williams. Jarvis Landry only trails Antonio Brown in targets and has found the endzone three times already, that’s one touchdown less than he had all of last season. Nelson Agholor has been a completely different player out of the slot this season, and has only failed to score a touchdown in two games so far. Webb and Williams rank 1st and 3rd respectively in yards per cover snap and they are targeted more frequently than any other slot corners in the league. Quarterbacks are throwing at them early and often and they are giving up big chunks of yardage. Carson Wentz shouldn’t have much of an issue throwing the ball anywhere against the 49ers defense, but aside from Webb, the Ravens D has been pretty good against the pass and Matt Moore will likely look for dink and dunk passes to Landry all day.

Stefon Diggs is on track to play this week, and he will be lining up against Jamar Taylor for the better part of the game. Against Taylor, QBs are 26/36 for 391 yards, three touchdowns, and zero interceptions. If Diggs is actually at full health, he should be able to fly by Taylor and pick up where he left off as one of the best WRs in 2017.