Who has the edge on the perimeter in Week 6?

Breaking down the key perimeter matchups for Week 6.

The matchup I’m looking forward to most this week is the Raiders offense in desperate need of a spark going up against an underrated Chargers secondary. Casey Hayward is the 8th highest graded corner on Pro Football Focus and Trevor Williams ranks 18th. Amari Cooper and Michael Crabtree play almost the same percentage of snaps on each with Seth Roberts in the slot on 3-Wide sets. Hayward and Williams generally stay to their respective sides so the receiving duo should see their fair share of both. Cooper is currently graded at 36.9, ranking 110th among receivers. He has yet another tough test ahead of him here, but it’s only a matter of time before a receiver with his talent breaks out.

Sammy Watkins has been targeted only six times over the past two games and has made just one catch. This trend may very well continue as he’ll be getting a heavy dose of Jalen Ramsey and A.J. Bouye on Sunday. Both are top 10 cornerbacks who have only been beaten by Antonio Brown. The Jaguars convert 9.9% of their pressure into sacks (more than any other team) and Jared Goff hasn’t played well under duress. Between the disruption up front and the shut-down corners, it will be a very long day for Watkins and the rest of the Rams receivers. The Jaguars forced Big Ben into five picks last week and excluding Antonio Brown, no wide receiver has gained over 60 yards on them in a game. Quarterbacks have a league worst 56.9 passer rating against Jacksonville.

When the matchup has been in their favor, Jacoby Brissett and T.Y. Hilton have absolutely lit it up. Seven catches for 177 yards last week against the 49ers and seven catches for 153 yards and a touchdown three weeks ago against the Browns. This week they face a Titans defense that has given up the most passing touchdowns in the league and the 9th most passing yards. The Titans have also given up the 4th most fantasy points to wide receivers so far this season, and Pro Football Focus gives Hilton a 40% advantage over rookie cornerback Adoree’ Jackson. Brissett has the 5th highest passer rating in the league on deep passes, I expect him to connect with Hilton a couple more times in Tennessee.

The Saints’ defense doesn’t usually come up in a positive light, but Ken Crawley is the 4th highest graded cornerback on Pro Football Focus and one of only four corners with a grade above 90. Rookie Marshon Lattimore is only two spots behind him. Yes, the New Orleans Saints have two top 10 graded cornerbacks. Before their bye, the Saints shutout the Dolphins, holding Jay Cutler to only 164 yards passing. The week before that, they held Cam Newton to 167 yards. Kenny Vaccaro has been the weak link covering the slot in that defense. He covers there on 93% of his snaps and Golden Tate lines up there on 81% of his. Tate was held in check by Carolina and Minnesota but could certainly get loose against Vaccaro.

Ken Crawley had himself a day! pic.twitter.com/nH4pTokAlB

Marcus Peters is one of the best cornerbacks in the NFL, but he only lines up on the left side (90% of the time) or in the slot (9% of the time). If he doesn’t follow Antonio Brown, Brown will get to face Terrance Mitchell for a large percentage of his routes. When Peters is covering Brown though, it will be interesting to see if Ben Roethlisberger still tries to force him the ball. Despite their daunting defense, the Chiefs have given up the 8th most passing yards in the league and 2nd most fantasy points to wide receivers so far. Big Ben will look to bounce back from his horrible 5-pick performance last week and Brown will have a huge advantage whenever he isn’t being covered by Peters. 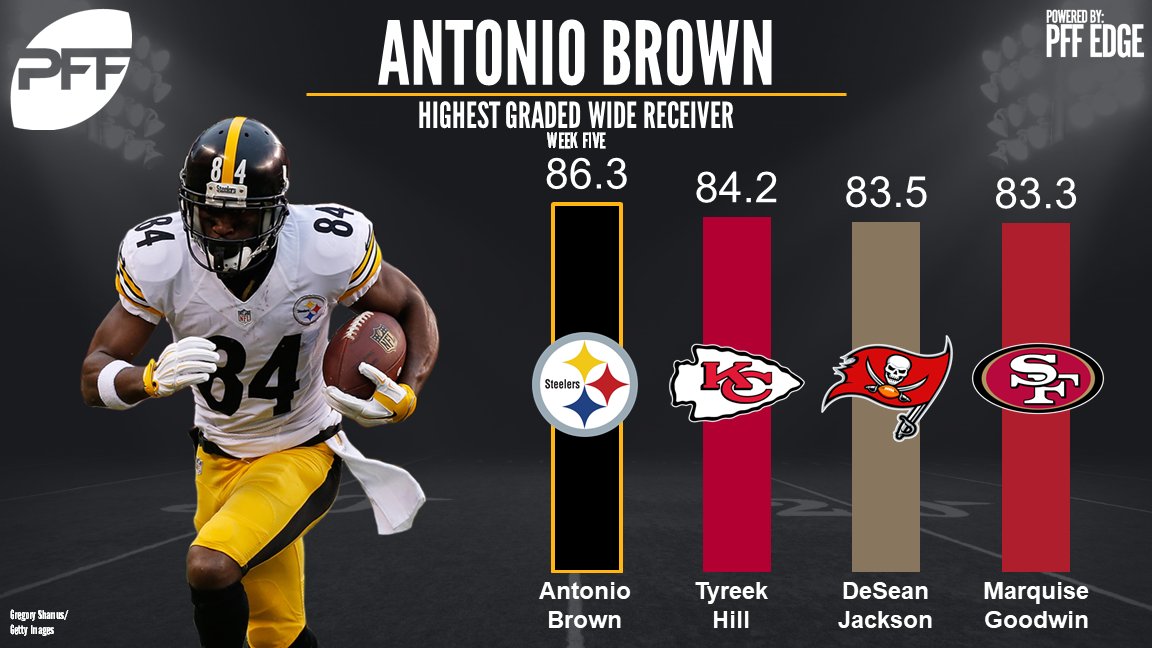