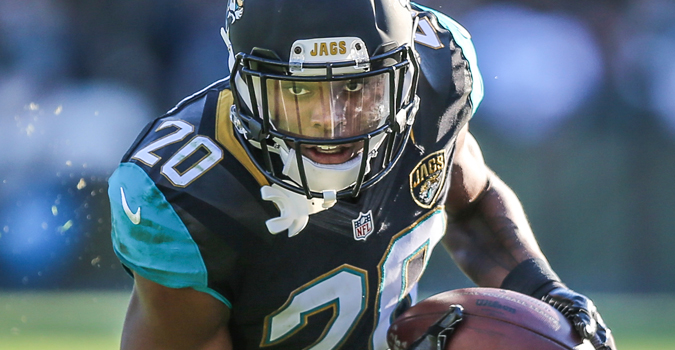 Will Antonio Brown be shut down this week?

At the quarter-mark of the season, we’ve learned a lot about which secondaries are playing well and which are continually getting burned. Here are the matchups I’m looking at going into Week 5.

The most exciting matchup to me this week is easily the Pittsburgh Steelers’ arsenal of Antonio Brown, Martavis Bryant, and rookie JuJu Smith-Schuster (who’s been generating a bunch of noise lately) against the shut-down corners of the Jacksonville Jaguars, namely Jalen Ramsey and A.J. Bouye. To give you some insight as to how well the Jags defense has been against wide receivers, check out this tweet from Evan Silva:

According to Pro Football Focus, Antonio Brown is the only receiver here who has the “advantage” against his defender. However, it’s not the large advantage that the “CB-proof” star wide-out is used to enjoying. Brown is the third highest graded receiver through four weeks of play and Ramsey is the third highest graded cornerback. The Steelers receivers generally bounce around from side to side with Smith-Schuster primarily lining up in the slot (64% of his snaps) while Ramsey and Bouye tend to stay to the left and right respectively. If Big Ben Roethlisberger is looking for a slimmer of daylight, he’ll try and attack slot corner Aaron Colvin, the clear weak(er) link in that secondary. We should also keep in mind that Tashaun Gipson and Barry Church have been incredible safeties in coverage this season. Jacksonville has only given up 10 fantasy points a game to the WR position, that’s the least in the league. Meanwhile, they’re getting trampled over up front and have given up the third most points to running backs, so look for Le’Veon Bell to go off for a second week in a row.

After facing daunting defenses with cornerbacks the likes of Aqib Talib, Patrick Peterson, and Janoris Jenkins, Dez Bryant and the Cowboys receiving corps will be able to EAT against the Packers secondary. According to Scott Barrett at Pro Football Focus, Dez averages 3.30 PPR fantasy points per target against bottom ranked corners and 1.21 points per target against top ranked corners. He’s the only receiver with a point differential above two. The good news for Dez is that the Packers’ corners this year have been awful. Slot corner Morgan Burnett is the only member of the Packers secondary with a grade above 50. They’ve given up big games to the premiere receivers they’ve faced so far – 111 yards and a touchdown to A.J. Green and 108 yards to Julio Jones — look for Dez Bryant to produce a similar stat line.

When I set out to write this article, it’s become common practice for me to start by looking at who the Detroit Lions are playing. They have two top 25 graded cornerbacks in Quandre Diggs and Darius Slay, and two top 10 graded safeties in Glover Quin and Miles Killebrew. Their victims this week will be the reinvigorated Carolina Panthers. Cam Newton looked to finally be on the same page as his big bodied receivers, throwing for 104 yards to Kelvin Benjamin and 70 yards and a pair of touchdowns to Devin Funchess. The Lions’ secondary held their own against the red-hot Vikings receivers and have not yet given up 100 yards to any receiver this year.  Cam at his best can burn just about any defense, but if we see the Cam from the first three weeks, the Lions will feast.

What’s the most surprising part about the Buffalo Bills at the quarter point of the season? The 3-1 record? 1st place in the AFC East? The fact that LeSean McCoy hasn’t scored a touchdown yet? Or the incredible play of rookie Tre’Davious White? White was sprung forward to the CB 1 spot with the surprising departure of Ronald Darby and he’s played the part magnificently. So far he’s had to go against Kelvin Benjamin, Demaryius Thomas, and a bit of Julio Jones. He’s the fifth highest graded cornerback through four weeks and made the PFF Elite defensive team of the week in week 4. This week he’ll have his toughest test yet against a surging Bengals offense and a red-hot A.J. Green.

I don’t want to pick on the Bears since I know most of you won’t be starting those receivers (especially with Mitch Trubisky getting his first career start), but we have to talk about the Vikings secondary for just a minute. Detroit got most of their work done on the ground last week because the Vikings didn’t give up more than 42 yards to any pass catcher. Xavier Rhodes and Trae Waynes are controlling the outside while the veteran Terence Newman is shutting down the slot. Each one of these cornerbacks has the PFF “advantage” against the Bears’ receiver they will likely guard, and it may be a very tough welcoming to the league for Trubisky.