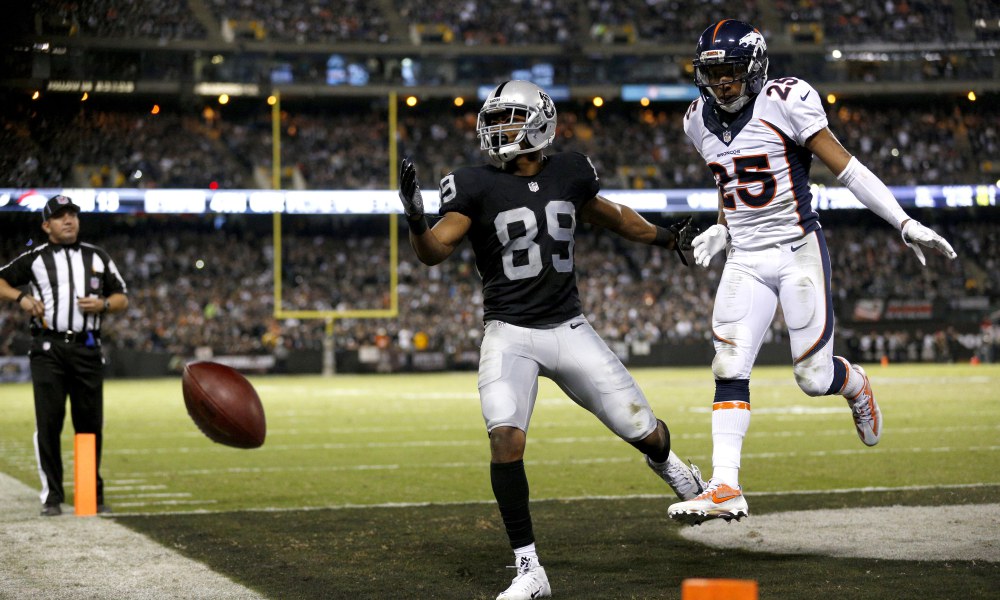 The Raiders are in trouble this week.

I generally like focus on some tough secondaries to avoid as well as some weaker secondaries to exploit every week, but the cornerback play around the league has been so solid this year that this week I’m going to stick to that. This week is filled with matchups of red hot receivers going against shut-down secondaries, here are the ones I think will be most exciting.

For audio-based listeners, scroll to 27:43 to hear my positional breakdowns.

This is going to be an exciting matchup for both team’s secondaries. Darius Slay and Quandre Diggs have been two of the best corners in football this season. Diggs has Pro Football Focus’ 4th highest CB grade going into Week 4 and Slay isn’t far behind him. If I were to tell you that Stefon Diggs would be the number one fantasy receiver going into Week 4 and that Adam Thielen would round out the WR1 class at number 12, would you believe me? Or what about that Stefon Diggs would have the best game of his career with Case Keenum as his quarterback? Diggs and Thielen have been playing incredible football with or without Sam Bradford thus far, but they face a real test against the Lions’ secondary. Quandre Diggs plays in the slot almost exclusively. That will be a tough matchup for Thielen who lines up there just under 70% of the time. Slay will likely be following Diggs. The Vikings torched a Tampa Bay secondary last week that doesn’t have a cornerback who graded higher than 41 on Pro Football Focus. This is going to be a much tougher test for the young receiving duo.

The Lions’ receivers have to face Xavier Rhodes. The man who has so far shut down Michael Thomas, Antonio Brown, and Mike Evans. The question is: where on the field will Rhodes be? He lines up on the right side more often than not, but is known to bounce around, follow certain receivers, dabble in the slot occasionally, he goes wherever they need him. Golden Tate is the chain mover of that receiving corps and will likely get target the most, while Marvin Jones Jr is the deep ball/big play threat. One thing we can certainly assume is that Matthew Stafford is going to try and keep the ball away from Rhodes. If he can make Thomas, Brown, and Evans look pedestrian, he can surely shut down Tate and Jones Jr.

After receiver the Xavier Rhodes treatment last week, Evans has to go up against the New York Giants’ secondary, arguable the best secondary from last year. So far this year the Giants have looked awful. The majority of their issues, however, have been offensive. They have no O-line and zero run game, making it incredibly difficult for Eli Manning to deliver the ball to any of this talented receiving weapons. When the offense can’t produce, the defense stays on the field, and eventually they’re going to get burned. In the 4th quarter last week the G-men started to look how we expected them to look going into the season, and if they can continue that intensity, the whole team will benefit. It will be interesting to see if Mike Evans can break loose against Janoris Jenkins and Dominique Rodgers-Cromartie, of if he will be shut-down for a second week in a row.

Last week the Redskins stunned the raiders. They sacked Derek Carr over and over again and held the combination of Amari Cooper and Michael Crabtree to 13 yards on two catches. Most of the pressure they got on Carr, though, was not due to the blitz; it was coverage pressure. Washington brought four and the coverage was so good that Carr had nowhere to throw the ball. Eventually Ryan Kerrigan is going to get home. Coverage based pressure tells you that there’s no one open down field, but will this defensive dominance continue against the speedy Tyreek Hill? Hill’s two big Touchdown bursts have both come by taking advantage of blown coverage. Hill is definitely not the most polished route runner, but if the defense has one misstep, BOOM. He’s gone. He’s fast enough to break loose if a safety misses an assignment. Josh Norman largely does not follow receivers, he’s played 96% of his snaps lined up on the left. Breshad Breeland and slot corner Kendall Fuller are also having impressive seasons so far, so I look forward to seeing how they try to contain Hill.

They dynamic duo from Oakland was embarrassed last week in Washington, and to recover from that, they get to face the Denver Broncos. The Broncos were upset last week by the Buffalo Bills but this has been an historically good defense over the past few years and they are going to bounce back in a big way. Through the first three weeks of play, Amari Cooper has been the third lowest graded receiver in football according to Pro Football Focus. He’s dropped almost a dozen passes and he just hasn’t been able to create separation. This week, for the most part, he’ll avoid the big guns of Aqib Talib and Chris Harris Jr. since he lines up on the left 54% of the time and against three receiver that’s where Bradley Roby is going to be. As I noted last week, Roby is brought in against three receivers and Harris Jr. moves to the slot. Roby, however, has played well since Week 1 this season. Against the Cowboys two weeks ago he was able to shut Dez Bryant down (his Week 2 touchdown came against Talib). The bottom line is that any way you mix and match the CB matchups, Cooper and Crabtree are in for another rough day.

PFF currently ranks Raiders' Amari Cooper 107th out of 109 qualifying receivers.
His 37.5 drop rate is 15 points higher than any other WR.

You’re probably not thinking about starting any Jets receivers, but i really just wanted to address how well the Jalen Ramsey and A.J Bouye have been playing. Joe Flacco had 28 yards in the three quarters that the Ravens let him play in London last week. It’s been a few years in the making but the Jacksonville defense is finally clicking. If you’re thinking about starting Robby Anderson because of his breakout game against the Dolphins, think again. Ramsey has the highest overall cornerback grade on Pro Football Focus and Bouye rounds out the top 25. The Jaguars are no longer the defense you use when streaming quarterbacks.