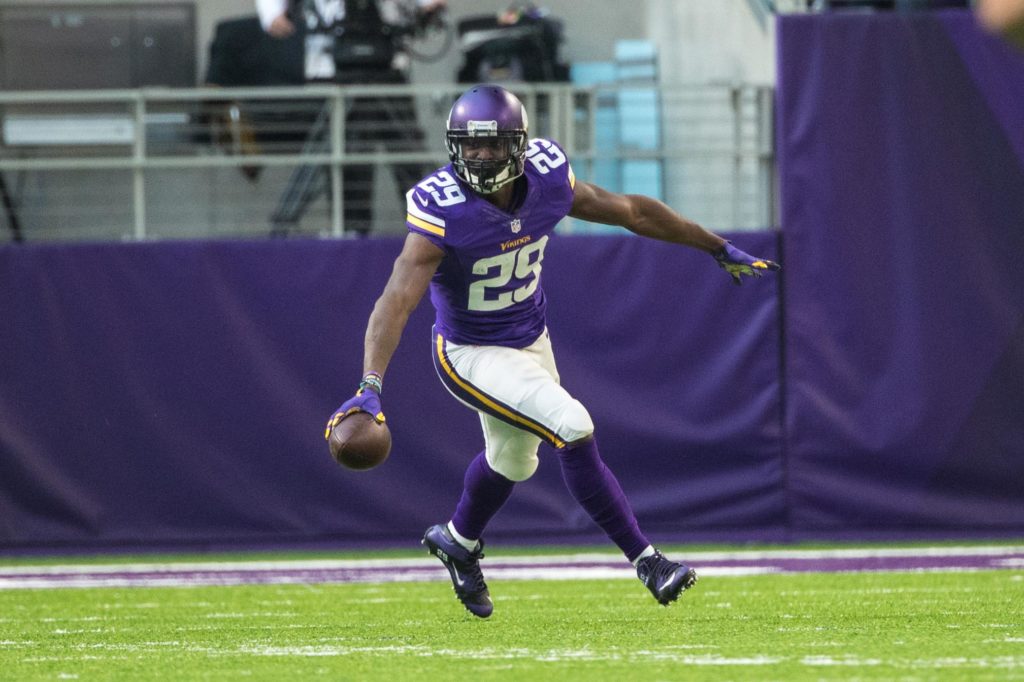 See which receivers should take advantage of preferable matchups during Week 3... Or get locked down.

Every Wednesday and Thursday during football season, you start to think about setting your fantasy lineup for the upcoming week of games. The first thing you do when you take a look at your team is checkout the defenses each one of your players is going up against. If you have two players of similar value but one of them is going against the Broncos’ shut down defense and the other has a cakewalk against the porous Saints defense, odds are you’re going to start guy number two with a lot more confidence.

In this series, I’m going to analyze some of the more exciting WR/CB matchups going into each week and let you know which of your wide receivers might blow up and which of them could be held in check.

Minnesota got man-handled by the Pittsburgh Steelers last week, but that was largely due to their inept offense minus Sam Bradford. On the defensive side, Xavier Rhodes has been playing some of his best football in these first two weeks of 2017. He’s only been thrown at 11 times, and receivers have only pulled in six of those targets. He has the ability to take receivers out of games. Michael Thomas couldn’t get it done against him in Week 1 and the great “CB proof” Antonio Brown only managed three catches for 28 yards when Rhodes lined up across from him. If Bradford is forced to sit again, the Vikings will need to heavily rely on their defense. DeSean Jackson lines up more often on the left, where Rhodes covers at a higher percentage, but it will be interesting to see if Minnesota tries to take Mike Evans out of the game by having Rhodes shadow him a bit. Either way, Jameis Winston will look to take advantage of whoever is being guarded by Trae Waynes. Harrison Smith is another piece that Winston needs to look out for. He’s churned out the second highest safety grade so far this season, and he won’t make things easy on Tampa’s young Tight Ends.

He's been pretty #good over the course of his career pic.twitter.com/Lb1T4swPTt

Though they’ve faced only the Cleveland Browns and the yet to score a touchdown Cincinnati Bengals, Baltimore’s defense has looked straight up nasty. They’ve only given up 10 points total this season, and held Andy Dalton and the Browns QBs to 470 passing yards while forcing eight interceptions. Jimmy Smith and Brandon Carr have played well and they get another incompetent QB this week in Blake Bortles. What interests me here is the play of slot CB Lardarius Webb. He plays 91% of his snaps guarding the slot, and while he’s been a stout defender in the past, he’s been the Ravens’ weak link this season, grading out at 45.1 by Pro Football Focus over the first two weeks of play. In three receiver sets, Allen Hurns usually moves to the slot, running 71% of his routes from there. In the absence of Allen Robinson, Hurns appeared to be Bortles’ “go-to” guy, and it looked like they had that 2015 garbage time connection back. If Bortles’ is going to find any success this Sunday, it will be Hurns out of the slot.

Allen Hurns delivered out of the slot against the Titans pic.twitter.com/sEt0M3kryH

Quandre Diggs has been the highest graded CB in the first two weeks of play at 89.7. Not too far behind him is the guy who lines up on the other side of the field – Darius Slay (also in the top 25). Julio Jones has been rather quiet so far this season, but he’s is itching to put together a classic Julio type game where he explodes for 200+ yards. He’s a ticking time bomb. Add in top five caliber safety play of Glover Quin and the emergence of a young Miles Killebrew and this could be in incredible matchup all around. The high octane Falcons passing game against what has been arguably the best secondary in the league thus far. On a separate note — watch out for the Lions. Everything seems to be clicking in Detroit.

Detroit Lions cornerbacks Quandre Diggs and Darius Slay combined to have 9 pass breakups in 2016. They are at 6 PBUs in '17 after two games.

With Kevin Johnson out 4-6 weeks and Johnathan Joseph also banged up, this could be another day for Tom Brady to absolutely feast, and could maybe be the breakout game for Brandin Cooks. Fully healthy, the Texans defense is a force to be reckoned with, but as they continue to be depleted due to injury, the holes there are getting larger. The Patriots always go after the biggest weaknesses of their opponents, and I don’t expect this week to be any different. Brady will identify the weakest link in that secondary and go after him. All the Patriots receivers + James White are expected to be beneficiaries.

This is a game that has absolutely zero appeal unless you’re from one of these two cities. You might think, however, that it may finally be time for T.Y. Hilton or Donte Moncrief to go off. After all, they’re playing the lowly Browns, right? Wrong. Jason McCourty and Briean Boddy-Calhoun are both top 10 graded CBs in the first two weeks of play according to Pro Football focus. Jamar Taylor is their weak link, so if anyone is primed for a productive day it’d be Kamar Aiken out of the slot. Taylor gave up some huge plays to Antonio Brown in Week 1, but aside from that, the Browns haven’t given up much to starting WRs (Martavis Bryant – 2 rec/14 yards, Jeremy maclin – 4 rec/31 yards, Mike Wallace – 1 rec/7 yards).