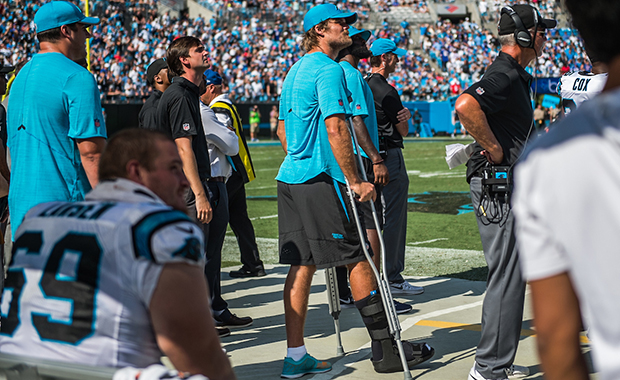 Fantasy football's biggest stars are starting to drop like flies.

Panthers TE Greg Olsen will undergo surgery on his broken right foot and is expected to miss 6-8 weeks, per @mortreport.

Greg Olsen suffered a non-contact foot injury yesterday, which was confirmed as a broken foot by Olsen himself in the locker room. Per Chris Mortensen, Olsen will undergo surgery on the broken foot and is expected to miss 6-8 weeks. It wouldn’t surprise us if he’s placed on Injured Reserve, which will help manage your roster if you have an IR spot. The Wolf will have a few tight end options in his Tuesday waiver article, or you can go the streaming route with the help of RedSocker on Tuesday afternoon.

From @gmfb: At this point, the groin injury to #Patriots TE Rob Gronkowski is not believed to be serious. Will test it today to be sure.

Rob Gronkowski bounced back in a big way against the Saints yesterday, but his afternoon was cut short when he hobbled off the field with a groin injury. Initially it looked like he tweaked his surgically repaired back, but it looks like the Patriots and Gronkowski dodged a bullet with a groin injury. More tests should be done today and we’ll keep you updated on his status throughout the week. If he misses any time, Dwayne Allen would be the TE1 in New England.

As for whether Giants WR Odell Beckham Jr. plays tonight vs the Lions, one source described it as "up in the air."

Tonight remains sketchy for Odell Beckham Jr. owners, as it looks like he’ll once again be a game-time decision. Even if he gives it a go, he won’t be 100-percent and carries serious scarecrow potential. Hopefully you were able to pick up Kenny Golladay or Sterling Shepard for Monday Night Football insurance, or if maybe even tight end Evan Engram or Shane Vereen if you moved OBJ to the Flex for more options. Hopefully Beckham gets back to 100-percent soon.

WR Jordy Nelson has a quad injury and his return is questionable. #GBvsATL

Jordy Nelson left Sunday night’s showdown against the Falcons in the first quarter after suffering a quad injury, when it looked like he took a knee to his thigh. Nelson was seen getting worked on by trainers and on the exercise bike before never returning to the game. Seeing Nelson on the bike should keep us optimistic, but it’s also concerning that he never returned to the game, especially with the game still competitive in the first half. If Nelson were to miss time, expect Davante Adams, Randall Cobb (if healthy) and Ty Montgomery to see more targets.

Head Coach Jay Gruden said after the game that Rob Kelley may have fractured his rib, which should force him to miss a few games. Rookie Samaje Perine carried the ball 21 times for 67 yards in his spot, while Chris Thompson looks like a guy who could put up a decent amount of PPR points if Kelley is forced to miss an extended amount of time. Thompson racked up 77 yards and a touchdown on only three carries and recorded 29 receiving yards on three receptions.

DeMarco Murray was dealing with hamstring tightness, which limited the running back during the second half of the Titans win over Jacksonville. Coach Mike Mularkey said that Murray’s injury stems from his hamstring issue that he dealt with during the preseason. He also added that rookie stud Corey Davis is also uncertain for Sunday after tweaking his hamstring again — which also bugged him in the preseason. If Murray misses next week, it’ll be Derrick Henry’s time to shine after putting up 92 yards and a score on 14 carries when Murray was sidelined against the Jags. Don’t forget we featured Henry as a “Title Winning Move” in the preseason.

I'm told it is confirmed #Browns WR Corey Coleman has a broken hand, per source.

It’s second time in as many years that wide receiver Corey Coleman will miss some time with a broken hand. Last season, Coleman was sidelined for six weeks with a broken hand, and unfortunately it looks like it has happened again. With Kenny Britt focused primarily on just cashing checks than making an actual impact this season, Rashard Higgins looks like the Browns No. 1 receiver. Higgins out-snapped Britt 54 to 42 and recorded 95 yards on seven receptions.