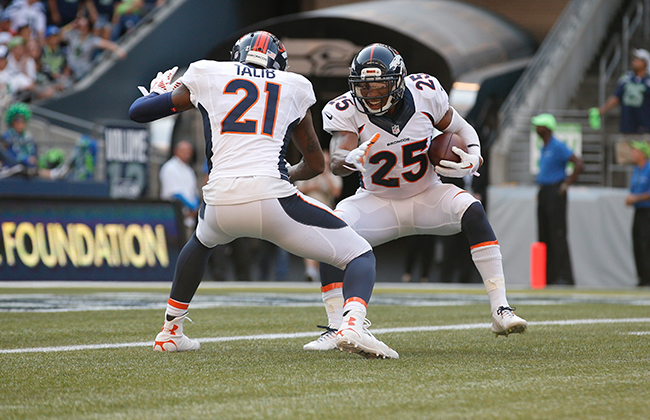 See which receivers should take advantage of preferable matchups during Week 2.

Every Wednesday and Thursday during football season, you start to think about setting your fantasy lineup for the upcoming week of games. The first thing you do when you take a look at your team is checkout the defenses each one of your players is going up against. If you have two players of similar value but one of them is going against the Broncos’ shut down defense and the other has a cakewalk against the porous Saints defense, odds are you’re going to start guy number two with a lot more confidence.

In this series, I’m going to analyze some of the more exciting WR/CB matchups going into each week and let you know which of your wide receivers might blow up and which of them could be held in check.

Matthew Stafford was able to throw the ball all over the Cardinals last week, and all three of his main receivers (Golden Tate, Marvin Jones Jr., and Kenny Golladay) had productive fantasy days. Going up against the Giants’ secondary, however, is a daunting task. Last week, Janoris Jenkins blanketed Dez Bryant, holding him to only two catches for 43 yards. Dez, of course, had to open his mouth and claim that Jenkins got “lucky”, but he was one of Pro Football Focus’ highest graded cornerbacks from last year, and Dez himself is the most CB sensitive WR there is. While Jenkins will likely be on Jones Jr., Dominique Rodgers-Cromartie will probably be primarily covering Golden Tate from the slot. Rodgers-Cromartie was the highest graded Giants CB from last year, and also received the highest grade from last week’s game against the Cowboys. Tate will struggle to get open when Rodgers-Cromartie is on him. The weak spot in the Giants secondary is Eli Apple. When Apple is in the game, he’ll either be on the right or or left side, against either Jones Jr. or rookie Kenny Golladay. Scott Barrett sums up below how poor Apple’s performance was last week. If Golladay gets to go up against him, he could have another strong week, but with the dominant forces of Jenkins and Rodgers-Cromartie, don’t expect the same success all three of these receivers had in Week 1

Eli Apple was targeted 12 times today, allowing 10 catches for 123 yards and a TD. Might not be long until we see Ross Cockrell take his job

With David Johnson’s wrist injury, people are expecting the Cardinals offense to be totally out of whack and all fantasy owners are jumping ship. Before you do that, you may want to take a look at Larry Fitzgerald’s best matchup of the year. Rookie Cooper Kupp torched Nate Hariston from the slot last week and I expect Fitzmagic to do the same. Fitz runs 64% of his routes from the slot, and while he may not have the speed he had 10 years ago, he’s still got the craftiness, and he’s bigger, taller, and more powerful than Hariston. Carson Palmer will look to take advantage of this matchup and use Fitz as his safety blanket early and often. John Brown, Jaron Brown, and J.J. Nelson will also find themselves frequently wide open. With Vontae Davis sidelined, the Colts’ highest graded corner is Rashaan Melvin at 50.1. This is a secondary that made Jared Goff look like Tom Brady last week. Start your Cardinal receivers, and go after them in DFS.

Jared Goff had the best game of his young career on Sunday against the Colts pic.twitter.com/lAkxbYCTT6

After receiving the Janoris Jenkins treatment last week, things don’t get any better for Dez Bryant in Week 2 lining up against Chris Harris Jr. and Aqib Talib in Denver. Dez scores a whopping 2.15 less fantasy points per target when facing top 25 cornerbacks than he does when facing the bottom 25. As Talib and Harris Jr. were both top 10 CBs last year, I expect Dez to struggle for the the second week in a row. It all depends on what the Broncos do with Bradley Roby, the clear weak spot in their secondary. Usually what happens on three receiver sets is Roby comes in as the right cornerback and Harris Jr. moves to the slot. Roby and Talib cover the slot 15% and 12% respectively, while Harris Jr dominates the slot corner position 64% of the time. If that’s the case, it will be a rough day for Cole Beasley, but I think Harris Jr. will follow Dez around. Talib plays 87% of his snaps on the left which should shut down Terrance Williams who lines up there the majority of the time. Dak Prescott will try to take advantage of Roby, but the Broncos are one of – if not THE – hardest teams to throw against.

The Ravens didn’t need to throw the ball much in Week 1 because they had Andy Dalton throwing it to their defense on every other play. However, they’ve thrown more than any other team over the past two seasons and I expect them to get back to that mentality against an underrated Browns secondary. Last week, Jamar Taylor was torched by Antonio Brown. Brown burned him in coverage and made him miss in pursuit. Luckily for Taylor, the Ravens don’t have anyone anywhere near the skills of Brown, but Jeremy Maclin is no slouch. Jason McCourty and Briean Boddy-Calhoun graded very well last week according to Pro Football Focus, and they’ll spend most of their day on the outside guarding Breshad Perriman and Mike Wallace; both of whom scored under 50 in last week’s game. The exciting matchup will be Taylor, who normally covers the slot on three wide sets, against Maclin who lines up there on 48% of his snaps. This should be the matchup that Flacco tries to exploit. If Maclin can have half the success that Brown did against him, he’ll come away with a productive day.

#Browns CB Jamar Taylor gave up 8 catches on 8 targets against Pittsburgh, including 5/5 against Antiono Brown, a 109.4 passer rating)

Whether it’s Davon House, Quinten Rollins, or Damarious Randall covering Julio Jones, Julio is going to tear the roof off. None of these cornerbacks earned Pro Football Focus grades higher than 52, so it really doesn’t matter where on the field he lines up. Aside from the favorable matchup, check out what happened in games following a sub 70 yard performance from Julio last season. The packers’ safeties — Haha Clinton-Dix and Kentrell Brice — graded out highly against the Seahawks last week but when Matt Ryan sees one on one coverage, those corners are going to get burned. This NFC Championship replay should be an absolute shoot-out.