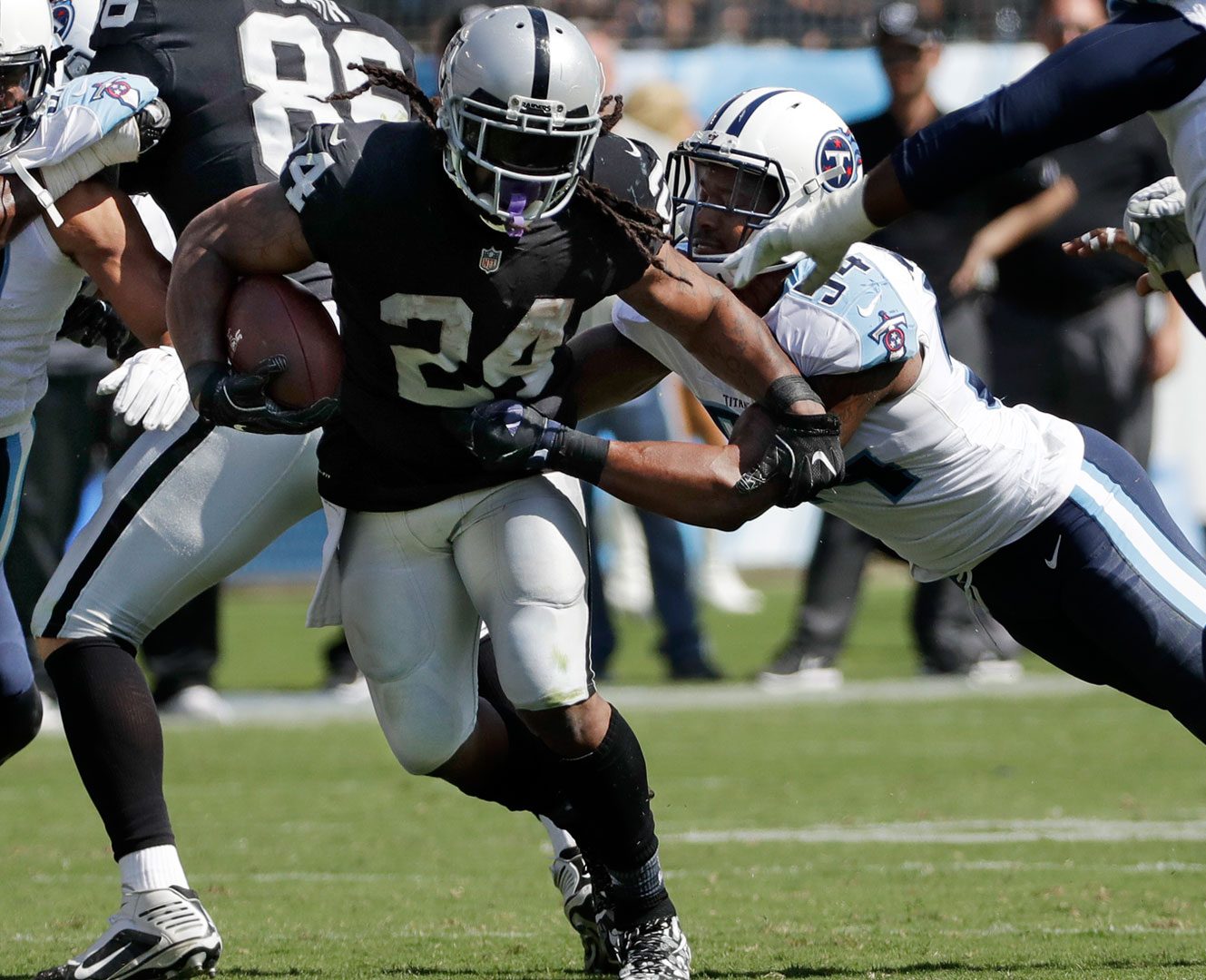 Things are a little different in a standard league. See who we are keeping on the bench for Week 2.

Week 1 went exactly as scripted, right? Everyone and their mother predicted Alex Smith finishing as fantasy’s top scoring quarterback while Tom Brady ranked in at QB19. I mean, duh. Who didn’t see Le’Veon Bell compiling just 47 total yards or Tarik Cohen scoring the fourth most points amongst running backs? That couldn’t have been more obvious. And you’d have to be a real knucklehead if you started Rob Gronkowski over Austin Hooper!

In all seriousness, it was a wild opening weekend of football. It is impossible to successfully predict everything. In last week’s article I had more good calls than bad. I accurately anticipated big games out of Dalvin Cook, Zach Ertz and Derek Carr. I’m eating my cookie as I write this. I also suggested benching Kareem Hunt, Matthew Stafford and Leonard Fournette. Whoops!

The point is I have no all-foreseeing crystal ball. If I did I’d use it for much bigger things than fantasy football. What I do every week is study the information available to make the most accurate prediction possible. I look at player matchups, usage trends, and overall talent.

Of course you’re going to roll the Bradys and Bells and Gronks back out there this week. They’re incredible skill sets allows them the opportunity to be successful no matter what the circumstances. This column is for the players you have to think about. For the guys who aren’t locks to start every week. With another week’s worth of data to better envision fantasy success or failure, here are the players you should believe in or bench.

Considering Denver’s defense allowed just thirteen passing touchdowns in all of 2016, Rivers’ three touchdown strikes on Monday were especially impressive. The veteran now faces a Miami defense that gave up the sixth most passing touchdowns last year (30). Expect Rivers to close the door on the Dolphins in their season opener.

An easy early season schedule means you should get used to seeing Carr’s name on this list. He finished as QB5 last week and faces a Jets defense that just surrendered 224 passing yards and two touchdown passes to a receiverless Tyrod Taylor. Armed with a beefy offensive line and a talented receiver corps, Carr is primed to outperform his week one numbers.

If Palmer can’t bounce back against the Colts then he might as well find a nice place to hang up his cleats. Indianapolis allowed Jared Goff to set career highs in both passing yards (306) and completion percentage (72.4) in a 46-9 embarrassment. With Vontae Davis still out of the lineup, the conditions are right for Palmer to put up points.

Beast Mode looked like Beast Mode last week, averaging 4.2 yards per carry (YPC) and breaking five tackles against Tennessee, according to Pro Football Focus. He now faces a Jets defense that just surrendered 213 yards from scrimmage and a touchdown to Buffalo’s running backs. Look for Oakland to take an early lead, and then run out the clock with Lynch.

The Packers illustrated great faith in Montgomery against a stout Seahawks defense, giving him 23 of the 25 running back touches. The converted wide receiver now plays an Atlanta defense that just let Chicago running backs average over 6.5 YPC. Between these two high scoring offenses, expect a lot of touchdowns and a lot of opportunities for Montgomery.

Only the Browns and 49ers allowed more rushing yards than the Dolphins last season. Gordon looks to improve his efficiency after recording 79 yards from scrimmage and a score on 23 touches last week. His high volume gives him a high floor, but his matchup gives him a high ceiling. The Chargers will strike early and often against Miami.

Stefon Diggs and Adam Thielen dominated New Orleans’ defense, combining for 250 yards and two touchdowns. Now imagine what Brandin Cooks and Chris Hogan can do with Tom Brady throwing them the ball. Hell, even Amendola is a smart play if he suits up this week. The Brady vs Brees duel will equate to a lot of scoring and a lot of fantasy points.

Despite Palmer’s struggles, Fitzgerald still produced six catches for 74 yards last week. He led the team with thirteen targets, and is expected to become the offense’s focal point with David Johnson undergoing wrist surgery. It’s not hard to envision Fitzgerald having his way with Indianapolis’ injury depleted secondary.

No receiver was targeted more than Hopkins last week, who saw sixteen passes thrown his way in a loss against Jacksonville. He scored Houston’s only touchdown of the game, and was clearly favorited by rookie quarterback, Deshaun Watson. Watson, who is expected to start tonight against the Bengals, will continue to force feed his best offensive weapon.

Rudolph caught all three of his targets for 26 yards and a touchdown against the Saints. With New Orleans providing such favorable matchups on the outside, expect Minnesota’s target share to balance out this week. Rudolph was the most targeted (132) tight end in football last year. He’ll be a key safety valve for Sam Bradford against a Steelers defense coming off a seven sack performance.

Without Jordan Matthews to compete with for passes, Zach Ertz continues to reap the benefits. He caught all eight of his targets last week against Washington for 93 yards. Up against a Chiefs defense that lost All-Pro safety, Eric Berry, for the season, Ertz should continue to see a lot of looks.

At this point in his career Witten is more known for his reliability than his big play ability. However, with the Giants’ elite secondary blanketing Dallas’ outside receivers, Witten caught seven of his nine targets for 59 yards and a touchdown last week. Expect similar usage Sunday against a lights-out Broncos secondary.

This pick is all about the matchup. After holding an up-and-coming Tennessee offense to just sixteen points, Oakland’s defense now welcomes a pathetic Jets offense to town. New York only mustered up twelve points while throwing two picks against a rebuilding Bills defense. This Raiders’ unit should be ready to capitalize on the Jets’ mistakes.

An underrated group heading into the season, Baltimore intercepted Andy Dalton a whopping four times in a 20-0 shutout. Now at home against the Browns and rookie quarterback, DeShone Kizer, the Ravens appear ready for another dominant defensive performance.

Cousins has started slow each of the past two seasons, failing to throwing multiple touchdowns passes in a game until week three at the earliest. After a rough preseason, the passing game continued to struggle, Sunday. Cousins is still adjusting to life without offensive coordinator, Sean McVay, or top receivers Pierre Garcon and DeSean Jackson. Traveling across the country to play Wade Phillips’ Rams defense doesn’t help his cause.

Dare I suggest benching Stafford after he burned the Cardinals and me last week? I do. This week he travels to New York to play a stout Giants defense that held the Lions to just six points last season. The Giants only managed 233 yards of total offense last week, implying that is should be a low scoring affair, no matter the outcome.

Coming off an uninspiring win against Cleveland, Roethlisberger now faces a daunting Vikings defense. Minnesota held a historically high scoring Saints offense to just one touchdown Monday night. While Roethlisberger does have the benefit of playing at home, the Vikings matchup as well as anybody against Pittsburgh’s playmakers.

After averaging just 1.9 YPC against the Steelers, Crowell and the Browns now head to Baltimore. The Ravens shut out the Bengals last week, limiting their running backs to just 3.5 YPC. Expect Baltimore to load the box against the run in an effort to force rookie quarterback, DeShone Kizer, to beat them.

Anderson was solid in his season debut, but now faces a Dallas defense that surrendered the least rushing yards in the league last year. The Cowboys continued their dominance thus far this season by limiting Giants running backs to just 30 yards on ten carries. Denver could be more pass heavy this week in an attempt to attack Dallas’ weak secondary.

Since being acquired in August via trade, Watkins caught all five of his targets for 58 yards in his Rams debut. Los Angeles faces a much tougher pass defense this week as Washington comes to town. Josh Norman and company limited Alshon Jeffery to three catches for 38 yards on seven targets this past Sunday. Expect the ‘Skins to focus a lot of attention on Watkins.

You can abandon any hope that a Jacoby Brissett start could boost Hilton’s fantasy production this week. Last year’s receiving leader is expected to be shadowed by All-Pro cornerback, Patrick Peterson, this Sunday. Without their star quarterback for the foreseeable future, Indy’s week to week fantasy ceiling remains excruciatingly low.

Atlanta’s second-year tight end was targeted only twice Sunday, but caught both passes for 128 yards and a touchdown. Hooper will need to see a significant uptick in usage if he is going to come close to his week one production. He now plays a Green Bay defense that held Jimmy Graham to just three catches for eight yards.

Kelce underwhelmed last week, catching five passes for just 40 yards. He now faces an Eagles defense that matches up particularly well against tight ends. Philadelphia held Jordan Reed to five catches for 36 yards on eight targets on Sunday. Kansas City may focus more on attacking the perimeter of the Eagles’ defense, where their leaky secondary can be exploited.

The third Colt on my bench list, Doyle and his teammates continue to suffer from the absence of Andrew Luck. Arizona is another team that exceeds at shutting down tight ends. They held the athletic Eric Ebron to just two catches for nine yards last week. Between the matchup and the lack of competent quarterback play, Doyle has “Bench” written all over him.

After allowing a league low 250 points last season, New England has already given up 42 points to Kansas City, Thursday night. Though Bill Belichick teams are known for their ability to bounce back, a steep turnaround will be tough to come by against the Saints. Drew Brees at home is almost impossible to contain. Expect a lot of points in New Orleans.

If you took my advice and streamed Buffalo’s defense against the Jets, you were probably pleased. The unit surrendered just twelve points and forced two interceptions. Now on the road against an exponentially more talented Carolina offense, it’s time to drop the Bills’ defense until they face the Jets again in week nine.