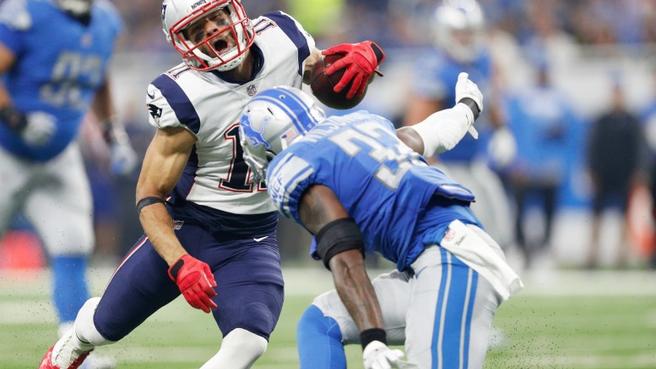 The Wolf is here to help you take advantage of the three devastating injuries that occurred over the weekend.

Preseason Week 3, aka “Dress Rehearsal Week,” is always crucial for fantasy football owners to monitor. Starters often play deep into the third quarter. Team’s no longer roll out their most vanilla schemes. Overall, we get the closest glimpse as to what teams will look like when the “real” football lights come on.

2017’s Dress Rehearsal was far more value-shaking than any other in recent memory, but not for anything the tape revealed. Instead, three key players suffered season-ending knee injuries in Julian Edelman, Spencer Ware, and Cameron Meredith.  The fantasy football implications are massive, so do not draft without checking out the latest rankings and catching up on all the major implications below:

As a New England fan, this injury hurts far beyond the fantasy realm. Yet, we need to dust off the tears and figure out just how Edelman’s 158 targets will be redistributed.

The slot role in New England has facilitated massive reception outputs since the days of Wes Welker. Whoever mans this role will see a serious volume increase, but the Patriots are unlikely to tip their caps. Most likely, they’ll rotate a variety of players through and aim to create mismatches.

Brandin Cooks is now the unquestioned top WR target here, and he could see his slot usage increase dramatically. He was reportedly frustrated that New Orleans used him as primarily a deep threat, as Cooks was a YAC monster in college and he wanted to showcase these abilities more. Perhaps only Odell Beckham and Tyreek Hill can rival Cooks’ ability to take a shallow 7-yard slant to the crib, and Cooks is likely to see the number of these looks increase dramatically. With more floor built into his sky-high ceiling, Cooks moves up to my WR8, now above Amari Cooper and even Dez Bryant.

Chris Hogan is also set for a volume increase. He did play 37% of his snaps out of the slot in 2016, and saw plenty of time in this role while with Buffalo. He’s not quite the quick-twitch athlete of Edelman, but Hogan brings more size and speed, and could be a mismatch terror from the position. He dropped a 4-70-2 TD monster during the Dress Rehearsal week, and Hogan now belongs in the WR30s and 75-80 overall range alongside the Jeremy Maclin and Pierre Garcon tier. There’s no higher bench stash WR.

James White might be the sneaky biggest beneficiary here. He could move into the slot while sharing the backfield, and should see his receiving usage increase far more regardless. White is a trusted third down option, just as Edelman was, and his dependability should leave him a massive share of these opened up looks. 65-70 receptions are totally reasonable, and White is now my RB30 and 73rd overall player, ahead of Ameer Abdullah and Danny Woodhead, among others. He is still going beyond Round 10 in most, which is a complete steal.

Danny Amendola and Malcolm Mitchell, who’s flying completely under the radar, are the last WR names to note. Amendola is expected to pick up about 20-25 snaps a game, according to the Herald’s Ben Volin, which wouldn’t leave much room for a weekly ceiling. He’s not on my radar. Rather, Mitchell intrigues me more, especially after demonstrating his late-season chemistry with Brady when Mitchell scored double-digit half-PPR points for four straight weeks. The two connected on timing and back shoulder routes alike, showing Brady trusts Mitchell. Neither are draftable in my eyes, but need to be monitored in case they emerge in this void.

A few extra targets certainly won’t hurt Rob Gronkowski, but his outlook feels largely unchanged. Gronk makes his living in the end zone, where Edelman was not expected to be a major factor. Health is the only thing standing between Gronk and 15 TDs, especially with even more targets for grabs. He remains a season-changing Round 2 pick.

Tom Brady also loses his most trusted target, but this is his deepest weapons cabinet yet. I’m not worried about him, and still like his shot at 40+ TDs. Brady remains my fantasy QB1.

Spencer Ware will miss all of 2017 with a torn PCL, which opens Kareem Hunt‘s door to a massive opportunity. Andy Reid’s RB1s have averaged 19.5 PPR Fantasy Points per Game thanks to an enormous receiving role in his quick-strike, high-percentage West Coast offense. Meanwhile, Hunt is a fantastic pass-catcher who has been heralded as a glove-like fit in this scheme since camp began.

This places him firmly on the low-end RB1 radar. Hunt should push for 17-20 weekly touches as an offensive centerpiece, and we’ve already seen him feasting on the NFL field this preseason: 20 touches (3 catches) for 102 total yards. He lands as my RB13, directly behind Dalvin Cook and Christian McCaffrey but ahead of Ty Montgomery. Hunt belongs in the early third conversation, and anywhere in Round 4 or beyond is robbery.

Who's the biggest #FantasyFootball beneficiary of #Bears WR Cam Meredith's injury, and why? Comment other

The Bears have a glaring opening for their top wideout spot following Cameron Meredith‘s torn ACL.  Given that they’ll likely suck as a whole and be playing catch up quite frequently, plenty of aerial volume will be available for whoever emerges as the top target.

Most prominently, athletic freak and former 7th overall pick Kevin White will finally have the chance to prove he’s not a mega bust. Remember, he was one of college football’s most dominant players just three seasons ago, using his 6’3″ frame and 4.35 forty to outrun and outleap defenders alike. If he vacuums 100+ target, White has the physical skill set to be a difference maker. He joins the Zay Jones / Robby Anderson tier, at WR46 and 119 overall.

If White continues to disappoint, Kendall Wright could emerge as the Bears’ top guy. He has flashed his quickness this preseason, most recently hauling in 3 catches for 35 yards, all three going for first downs. Wright played under OC Dowell Logains in Tennessee, and even racked up a 139 target, 94 catch, 1079 campaign with his former coach. Wright’s scheme familiarity and dependability will make him the preferred option in many eyes, perhaps even Mike Glennon. I’ll side with White’s upside, but I’m not passing up on Wright with a last round stab either.

Victor Cruz, Deonte Thompson and Markus Wheaton are the other WR names here, but none are worth a draft selection currently.

A pass catcher to remember: TE Zach Miller.  Before suffering a Lisfranc injury in 2016, Miller was fantasy’s TE11. He scored double digit half PPR points in 5 of his 10 contests, seeing some huge workloads (10 targets twice, a nine target and eight target outings). Especially if you end up punting the position, Miller needs to be back on fantasy radars.

The Fantasy Stock Market never stops turning, and we’ll be tracking every single move with our Fantasy Stock Watch. To keep up with breaking fantasy football news, be sure to follow us on Twitter, Instagram and Facebook.  Or hit me up personally @RotoStreetWolf.