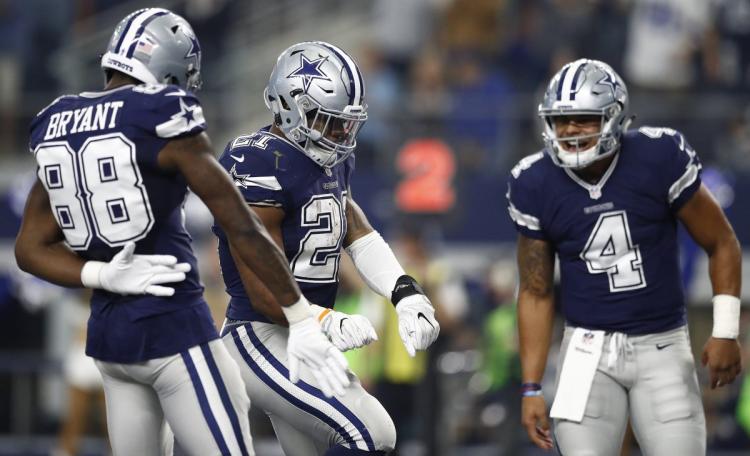 If you didn't catch our Cowboys preview with RJ Ochoa of SB Nation's Blogging the Boys, here are some of the key fantasy points that we learned.

Recently, our boys over at the Fantasy Fullback Dive (subscribe on iTunes here and Stitcher here) sat down with RJ Ochoa from Blogging The Boys. You can find the episode here. As they’ve been doing all summer, The Wolf and The Truth ended up with an extensive team preview on the Cowboys and their fantasy prospects for 2017. From Ezekiel Elliott‘s suspension (or lack thereof?) to the receiving corps, Dak Prescott‘s progression, and more, you’re gonna wanna listen to the whole thing.

But Keegs, what if I don’t have time to listen? What if I’m in public without headphones right now? What if my religion has a strict ban on podcasts? Have no fear – here are the top 5 things from our Cowboys preview that you really need to know heading into your fantasy season.

1. Ezekiel Elliott is still a back you want to own

If you’ve been on RotoStreetJournal.com any time in the last week or two, you’re well aware that The Wolf remains a BIG fan of Ezekiel Elliott. Despite Zeke’s 6-game suspension, The Wolf is adamant that he should go in the first two rounds of every fantasy draft. Why? Well, let’s let the man himself tell you:

“Zeke shouldn’t sniff Round Three, never mind Round Four. I don’t care about the “level of competition” in my league, I can always draft enough depth to place hold a fantasy godsend like Zeke. And I wholeheartedly disagree that Zeke is an “unaffordable luxury.” In fact, I consider him a discounted gem that all owners, equipped with the right information and strategy, can afford and thrive with.”

So how is Zeke still such an asset to fantasy rosters while missing the first 6 games of the season? Well, for starters, our expert thinks he may not even miss that many.

“My personal opinion is that at some point in time, Zeke will serve a suspension, although I’m of the belief that that will not be this season.”

Basically, RJ believes Elliott and his legal team will pull a page out of Tom Brady‘s playbook and appeal the suspension, likely pushing it back to at least next season and allowing Zeke to play a full slate of games in 2017. And come to think of it, why wouldn’t this happen? It’s best-case scenario for Elliott and the Cowboys, and it’s fully possible under the current appeal format. It just makes sense, really.

And even with a suspension in 2017 – full, reduced, or otherwise – Zeke is still a back you want to own this season. There’s a lot of depth at running back this year, allowing you to use an early-round pick on Elliott and still end up with a strong backfield during his absence. Also, look at last year’s numbers – why wouldn’t you want this guy? He’s young, talented, and a part of a solid offense with a strong offensive line.

Bottom line: ignore the experts. If Zeke is there for you in Round 2, pull the trigger.

2. If Zeke’s suspension holds up, Darren McFadden is the next-best Cowboys RB to own

This may seem obvious, as Darren McFadden has clearly been the Cowboys backup running back as of late, but with Alfred Morris also in the picture, things can get a little murky. RJ actually came out and said that if he were in charge, Morris would be the guy during Zeke’s absence, as he sees Morris as a better volume back and McFadden as a more effective compliment to Elliot. But the Cowboys don’t agree with this sentiment, and McFadden will be the guy if/when Zeke does miss time.

Ezekiel Elliott saw the first 10 snaps, McFadden the next 8. Hillman and Morris split most of the rest of the game, with Hillman in 1st https://t.co/qogl5pJci2

RJ predicts about 16-18 carries per game for McFadden, with Morris getting some but obviously not as many. He also points out that Rod Smith, older brother of Cowboys LB Jaylon Smith, is in the picture as well, not necessarily from a fantasy standpoint but possibly as someone who could vulture some touches from the rest of the backfield. Ultimately, however, after Elliot the Cowboys backfield isn’t necessarily a mecca of fantasy football potential. Go McFadden if you go there, but ideally go elsewhere for your RB needs.

3. Dak Prescott is ready to lead the team in year 2

“From everything I’ve seen from Dak on the field and how he looked in training camp, this is a dude who looks completely and totally poised to take that next step.”

Even if Ezekiel Elliot misses the full 6 games of his current suspension, RJ said he doesn’t expect more than a 5-7% jump in pass plays during his absence. The Cowboys are still a run-first team, he insisted, and won’t let this suspension change that. As far as Dak Prescott’s growth, however, RJ is really excited for year 2. He equates Dak Prescott to that guy you went to high school with who’s good at everything and gets along with everyone. That’s really who Dak Prescott is as a person, and he carries that over with him to the football field. His quiet confidence and strong leadership is exactly what this team needs after losing its star from last season for possibly over a quarter of the season.

RJ also said the team believes in Dak 100%, possibly even more than Romo’s teams did in him. He shows poise and leadership beyond his years, and both from a fantasy standpoint and in general, he’s a guy you want on your team.

4. Dez Bryant will be Dez Bryant… and after that, the receiving picture is foggy

There aren’t many things I can tell you right now about Dez Bryant that you don’t already know. He’s an absolute freak of nature athletically. He’s the Cowboy’s undisputed top receiver. He’s also missed 10 games in the past 2 seasons to injury, and last season there were 4 instances that he caught 3 or fewer passes in a game, leading him to finish 39th in scoring among WRs. Nevertheless, he showed up to camp this year looking as good as ever, and remains the best option among the Cowboys receiving corps. Who comes after him depends on who you ask.

“I think the most fantasy-relevant WR outside of Dez in standard formats might be Terrance Williams, just because he probably gets the next-largest volume of targets. But in PPR formats, I think Cole Beasley is obviously a candidate because he is their slot guy, he moves the chains, he catches more balls probably on a per-game basis than anybody.”

As someone who has owned Terrance Williams a handful of times over the past few seasons and dealt with the frustration over his inconsistency, I’m going to say if you’re looking at Cowboys WRs that aren’t named Dez Bryant, lean toward Cole Beasley. His targets have steadily increased over the last 3 seasons, and in 2016 he set career highs in starts (6), targets (98), catches (75), and yards (833), while also tying his career high from 2015 with 5 TD receptions. He’s the team’s main slot guy, which puts him on the field for the majority of the team’s offensive snaps, and he’s definitely worth a mid-to-late round pick for this year.

5. At tight end, Jason Witten is still the guy – but keep an eye on Rico Gathers

Who? Exactly. Rico Gathers spent 2016 on the Cowboys practice squad after being drafted in the 6th round of last year’s draft. So he hasn’t put up any professional statistics quite yet, although he does have over 100 yards receiving and 2 TDs this preseason. A quick web search reveals that he averaged 11.2 points and 9 rebounds per game his senior year of college, which makes absolutely zero sense until you learn he actually played collegiate basketball at Baylor, and hadn’t played organized football since eighth grade. Think back to yourself at that age vs. now – little different, right? *Chuckles and tears up a picture of myself wearing a UT Colt McCoy jersey, Michigan State snapback, and cargo shorts on the first day of school.*

Gathers has changed a lot since then, too, and now stands at 6’6″ and 285 pounds with great leaping ability – basically the prototypical red zone target for a young QB. But with no professional or collegiate experience under his belt and future Hall of Famer Jason Witten still holding down the tight end position, is Gathers even worth a late-round pick?

“Rico has been working incredibly diligently over the offseason, literally just to learn the game of professional football. And he has, by all accounts, transferred his athleticism to a point where he is an incredible red zone weapon. However, the obvious caveat to that is that Rico Gathers’ blocking isn’t on par with an NFL-level tight end. So he’s a sexy option in that you can use him to score, but it’s hard to be able to put him on the field a lot. I think he’s certainly a part of this team’s 53-man roster, but I don’t know that he is going to see a serious volume of snaps simply because he’s just not there.”

Gathers will be attempting to join the likes of Antonio Gates, Tony Gonzalez, Jimmy Graham, and the handful of other collegiate basketball players who decided tight end in the NFL was more fitting for them. And although he likely won’t make much of an impact for the 2017 Cowboys, the talent and raw potential is definitely there, and should be looked at in late rounds primarily in dynasty style leagues.