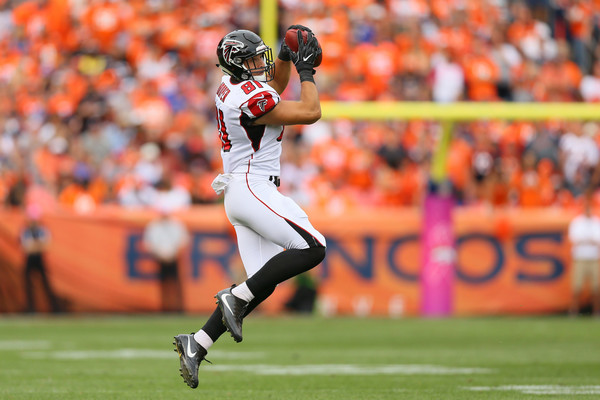 I hate to tell you this two seconds into my article, but true sleepers don’t exist anymore. People like me (the media) pinpoint those budding stars long before the season and harp on those players until everyone and their mama has them on their radar. You’ll pay full price this year for guys like Terrelle Pryor Sr., Dalvin Cook and Martavis Bryant because their hype trains are already operating at full capacity.

So forget sleepers. Let’s find players who are being overlooked for one reason or another, but still offer value. The guys who no one saw coming like the eleventh chicken nugget in your ten piece meal. I’ve discovered seven players who I believe will outperform their Average Draft Position (ADP).

Fantasy rankings and scoring are based off the standard scoring format. Average Draft Position (ADP) taken from ESPN.COM.

The improvement Mariota showed from his rookie year to last season has some analysts predicting the quarterback will perform at an elite level in 2017. He certainly had a stretch of elite play last season, leading the league in fantasy points from weeks five through twelve. What’s more impressive is he did it with a receiving group consisting of Rishard Matthews, Tajae Sharpe and Kendall Wright.

Already boasting one of the league’s top offensive lines and most potent rushing attacks, Tennessee made upgrading their receiving corps a priority this offseason. The Titans spent their fifth overall pick on the NCAA’s all-time receiving leader, Cory Davis. The team then used a couple third round picks to draft speedy Taywan Taylor to work in the slot and athletic tight end Jonnu Smith. Veteran touchdown machine, Eric Decker, was also signed to a one-year deal when cut from the Jets in June.

The obvious effort to enhance the passing game suggests Tennessee will air it out more in 2017. That’s good news for fantasy owners considering last season Mariota ranked 28th in pass attempts per game, but he was fifth in fantasy points per dropback, according to Pro Football Focus (PFF). Everything is in line for this quarterback to drastically outplay his ADP of 104th overall.

Third year’s a charm, right? Since being drafted fourteenth overall in 2015, Parker has been deemed a breakout sleeper candidate. Each of those two years he has dealt with nagging injuries that prevented him from doing more than merely flashing the immense talent he possesses. Let me tell you why 2017 will be the year Parker blossoms into the true number one receiver Miami knows he can be.

Parker took a step in the right direction last season. He more than doubled his amount of receptions and finished second on the team in receiving yards (744) and receiving touchdowns (4). Parker knows he has to stay healthy if he wants to live up to his potential and changed his workout habits this offseason in order to do so.

“I’m just tired of just being hurt and not healthy a full season, [so] expect some big things this year,” said Parker, according to Chris Perkins of the Sun Sentinel.

Several members within the organization have reiterated that sentiment this offseason, but none were as noteworthy as Parker’s new quarterback, Jay Cutler.

“I think he’s kind of a faster Alshon,” Cutler told the Miami Herald.

That’s significant because Cutler is known for locking onto receivers. In games which both Cutler and Jeffery played the majority of snaps since 2013, Jeffery averaged over nine targets per contest. That equates to 145 targets over a sixteen game span, which would have tied for tenth in the NFL last season.

When Eddie Lacy signed a one-year contract with the Seahawks this offseason many were trigger happy in deeming him Seattle’s lead back. Pete Carroll sure wasn’t. Rawls has been working with first team offense throughout the preseason, which is reflected on the team’s depth chart, where Rawls is listed ahead of Lacy. When asked about his running back Carroll responded,

“He really is back to the form we saw a couple years ago and we’re all really excited about that and he is too.”

Flashback to 2015, when Marshawn Lynch appeared in only seven games due to injury. A rookie from Central Michigan averaged over 117 yards from scrimmage and totaled five touchdowns in the seven games he started in Lynch’s place. Rawls was a hot commodity before breaking bone and tearing ligaments in his ankle. He then hurried his way back on the field and broke his fibula in week two of last season.

Lacy missed eleven games last year after being placed on IR with an ankle injury of his own.

I’m not going to pretend like Lacy won’t eat (pun intended) into Rawls’s carries this season. But with an ADP of 128th overall, Rawls offers ridiculously high upside for a player who is practically free.

Martin’s Jekyll and Hyde ways are nothing new to Tampa Bay. The Boise State product has rushed for over 1,400 yards twice in his career, but he failed to reach 500 yards on the ground his other three years. Entering this season motivated to prove his worth, Martin worked to lose two percent of his body fat this offseason, and appears to be back to Pro Bowl form.

“He looks the same out there, mentally and physically. So he might be one of those guys that needs a carrot [in front of him],” Bucs General Manager, Jason Licht, told Dan Graziano.

With three games of his suspension left to serve, “The Muscle Hamster” will have to wait until week four to redeem himself. In the meantime, Jacquizz Rodgers will pick up the slack. He illustrated his ability to fill the void last season by averaging over 105 yards from scrimmage and scoring twice during the five games he started in Martin’s absence.

Martin’s ADP is 106th at the moment, and Rodgers isn’t being drafted until pick 133. That’s a bargain for a backfield likely to yield RB2 numbers. Grab both backs late in the hopes that Rodgers keeps you afloat until Martin returns in the form of Dr. Jekyll.

After nearly doubling his yardage and touchdown totals from year one to year two, Moncrief was a popular breakout candidate for 2016. Unfortunately, the Ole Miss product was hampered by shoulder and hamstring issues, which limited him to just nine games. Despite his ailments, Moncrief led the team in receiving touchdowns, pulling in seven scores on just 30 receptions.

When exactly Andrew Luck returns from injury remains a mystery. Nevertheless, there is evidence to suggest that ‘Crief could be in for a big season. Second stringer, Scott Tolzien, heaved 11 of his 36 passes Moncrief’s way in the quarterback’s lone start last season, suggesting the 6’2” target could be leaned upon if Luck misses time.

As soon as number twelve is back, it’s bombs away for last year’s fifth ranked passing offense. Entering a contract year, Moncrief says he lost nine pounds this offseason in an effort to increase his speed and durability. The 24 year-old currently isn’t coming off the board until the 102nd pick, offering tremendous value at that point in your draft. With a FLEX floor and a WR2 ceiling, I’d suggest targeting Moncrief in the mid to late rounds come draft day.

Hooper was the second tight end selected in the 2016 draft after being recognized as a Mackey Award finalist and impressing at the combine. As a rookie he led Atlanta’s tight ends in receiving yards (271) and touchdowns (3), but he was one of three Falcon tight ends to top 200 yards receiving. With Jacob Tamme elsewhere, Hooper now sits securely atop the depth chart and is expected to see a steep increase of targets.

Matt Ryan has been without a go-to tight end since Tony Gonzalez retired after the 2013 season. With Julio Jones frequently commanding double teams on the outside, the middle of the field will be wide open for Hooper to step up and be that guy. The Falcons also play just three games in 2017 versus teams who ranked top ten in passing touchdowns allowed last season, third fewest in the league.

With an ADP of 137th, Hooper is more than worth the late-round flyer it will cost to land him. The talent and opportunity are there for the 22 year-old to finish as a top ten fantasy tight end this season.