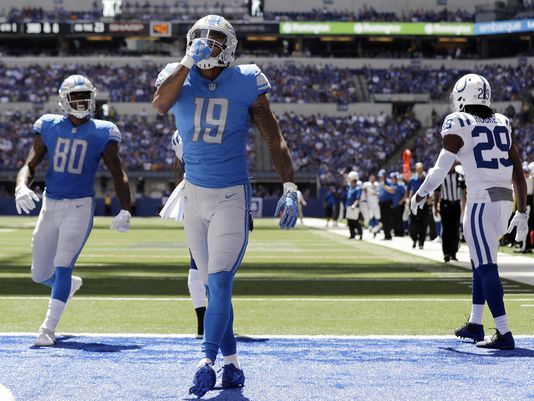 After a two-touchdown performance in his preseason debut, Kenny Golladay is solidifying his spot as the third wide receiver in Detroit.

After last week’s buzz regarding third round rookie wide receiver Kenny Golladay’s red zone dominance during training camp, he backed it up in a big way during his preseason debut, finding the end zone not once, but twice against the Colts. Golladay is poised to take over the Lions’ third wideout spot, which was manned by Anquan Boldin last season.

If you watch or bet on #MACtion, you know who Kenny Golladay is, but if you’re a regular contributing member to society, you’ve probably never heard of him. Golladay hails from Northern Illinois, which is one of the better teams from the MAC Conference, a conference which is one of the more high-scoring in all of college football. The MAC has produced NFL studs such as Randy Moss (Marshall), Chad Pennington (Marshall), Ben Roethlisberger (Miami, OH), Greg Jennings (W. Michigan), Khalil Mack (Buffalo), Antonio Brown (Central Michigan), Julian Edelman (Kent State) and more recently Corey Davis (W. Michigan) and Golladay.

Golladay put up video game stats at Northern Illinois, racking up 160 receptions, 2,285 yards and 18 touchdowns in only 26 games played. He’s a 6-foot-4, 218 lb receiver who excels in the red zone, and this was quickly noticed during Lions training camp. Here’s what Kyle Meinke of MLive.com had to say about Golladay’s training camp thus far:

“The Detroit Lions’ third-round pick [Golladay] has been turning heads since he joined the club in the spring, and already looks like he could be an impact player from the get-go. On Sunday, he showed exactly why during a devastating performance in red-zone drills. Absolutely devastating.”

Golladay especially dominated last Monday’s practice, connecting on all three of Matt Stafford’s red zone targets — two of which were a high degree of difficulty. He still has to work on his complete route tree, but he already has shown the ability to separate on slant routes, due to his quickness and size. On the other hand though, he uses his veteran-like frame to win one-on-one, contested battles — especially in the red zone.

“Me being that big body, I got to come down with the ball,” Golladay said. “Not a lot of corners are my height. They’re going to be shorter than me, so I got to make that play when my number is called.”

If you were one of those who is a functioning human being and hadn’t heard of Golladay before, he put himself on the map during his preseason debut against the Colts. Playing in the first half, the rookie wideout put on a show. He didn’t show the ability to gain great separation, but he won those contested battles, and most importantly, he displayed his red zone dominance against NFL caliber talent who weren’t his teammates.

Kenny Golladay really impressed in the first half pic.twitter.com/J6R9cSOcvn

Golladay looks like he’ll immediately start as the third receiver on a Lions’ offense that attempted the ninth most passes in the league last season. Although he has the potential to hop Marvin Jones Jr. in targets, that’s unlikely to happen in 2017. He’ll takeover Anquan Boldin’s WR3 slot, where the veteran totaled 67 receptions, 584 yards and 8 touchdowns in his lone season as a member of the Lions.

The rookie not only dazzled in his preseason debut, but he also debuted on The Wolf’s Wide Receiver Rankings this week, coming in at WR61. If him and Stafford continue to build a rapport, and he continues to make plays in the preseason, he could become a legitimate penny stock in our system. Golladay has the potential to become a late-round flier who could help you win a title.

The Fantasy Stock Market never stops turning, and we’ll be tracking every single move with our Fantasy Stock Watch. Best of all, our industry-leading (and FREE) Draft Guide will be updated and re-released mid-August with all these important alerts, just in time for your drafts. To keep up with breaking fantasy football news, be sure to follow us on Twitter, Instagram and Facebook.