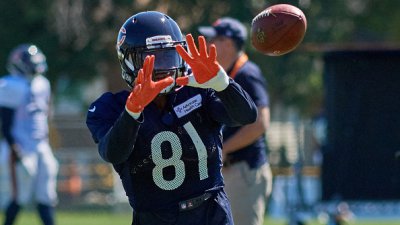 Cameron Meredith is one of The Wolf's biggest risers, and for good reason.

Chicago Sun-Times columnist Mark Potash recently noted that there is “evident” chemistry forming between Chicago Bears QB Mike Glennon and WR Cameron Meredith. Meredith injured his thumb during OTAs and even considered surgery as a possibility over the summer, but he suited up for the first day of mini camp on July 27th and has been impressing teammates and coaches since. Just 3 days into camp, Glennon told the Chicago Tribune he expects Meredith to have “a big year” and added, “Smooth is probably the best word to describe him.”

Meredith now becomes the favorite to handle top receiver duties in Chicago, surpassing 2015 1st-rounder Kevin White, who disappointed everyone to the tune of just 19 catches and 187 yards in 4 games last season.

Heading into his 3rd season with the Bears, Cameron Meredith has been named the team’s starting wide receiver alongside third-year wideout Kevin White. The two beat out the likes of Victor Cruz, Kendall Wright, Markus Wheaton, and others to become the primary pass-catchers for Mike Glennon — or Mitch Tribusky after his dazzling preseason performance — and expectations are high for the duo. While White’s injury-plagued young career has left something to be desired, Meredith is fresh off his first productive season as a pro, racking up 888 yards on 66 catches and finishing in the top 40 in PPR scoring.

Now obviously, Chicago’s offense is not a hotbed for fantasy production. The team is choosing between 3 less than impressive QBs, and although Jordan Howard finished 10th among RBs in scoring last season, regression is expected on an offense that doesn’t have fantasy owners buzzing by any means.

As far as Meredith is concerned, his production is based on something that’s very unpredictable and virtually 100% out of his control: the play of Mike Glennon. Despite his $45 million contract, Glennon still has just 5 professional wins under his belt and hasn’t started a game since 2014. Nevertheless, Glennon has been named the team’s starter heading into the preseason, and seems far removed from feeling “cheated on” when the Bears traded up to pick up Trubisky in this year’s draft.

Despite concern for Glennon’s consistency under center, a good rapport between him and Meredith could still boost the wideout’s fantasy value, and at least that seems to be taking shape so far.

“Glennon’s connection with Cameron Meredith continues to sharpen. The veteran quarterback hooked up with the third-year receiver on the finest completion of the day, a 20-yard “in” route in team drills. Glennon threw the ball before Meredith was out of his break, anticipating Meredith being open. The timing was perfect and Meredith caught it in stride. Glennon later showed that Mitch Trubisky isn’t the only Bears quarterback who can be dangerous on the run. He threw a 15-yard strike to Meredith while rolling to his right.”

What Meredith’s situation in Chicago may lack in terms of talent and experience, he can make up for with the abundance of targets he’s set to garner. He led the team with 96 targets a season ago — Eddie Royal finished second with just 43 — and finds himself in a prime spot to top 100 targets for the first time in his career. Kevin White could certainly cut into that number with a bounce-back sophomore season, but that’s far from a guarantee at this point in training camp.

Cam Meredith is about to lead the Bears in targets and he is #good pic.twitter.com/PGWxCC0osY

Long story short, Meredith is not an easy read for fantasy owners. In fact, The Wolf moved him up from WR50 to WR37 in his latest rankings. He had this to say about the Bears wideout:

No wideout has risen quite as much as Meredith. Coaches have reportedly been pushing him to embrace the No.1 mindset, and Meredith has apparently done just that. Everyone is raving about his “smooth” routes and his excellent control over his big, long body, and how he’s using it to out-muscle corners who are similarly deceived by his speed. Overall, this is a physical specimen who’s really coming into his own, with a coaching staff pulling for him to be their top target, and a quarterback who’s peppering him to that tune, thanks to an “evident rapport.” Despite being an UDFA rookie, Meredith went for 9+ catches and over 100 yards on four separate occasions, despite playing with Matt Barkley. Now that he’s further developed and adjusted to the speed of the game, those monster efforts could come even more frequently.

Overall, Meredith is big, fast, and definitely talented, but he’s also a part of one of the least exciting offenses in the league. Inconsistent QB play will certainly hinder his performance at least a handful of times over the course of the season. Fantasy owners right now can only really look at Meredith as a week-by-week streaming option, a guy who can produce with a good matchup but may not be the WR you want to rely on scoring from week in and week out. Right now, Meredith has an ADP of 96 in PPR leagues — which is pretty high — right in the ballpark of DeSean Jackson, Tyrell Williams and John Brown.