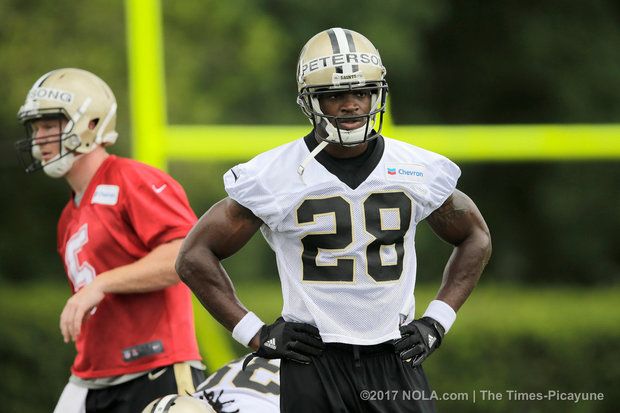 With a low floor and a high ceiling, which Adrian Peterson will we get this season?

Awake or asleep, sober or shit-faced, I cannot escape fantasy thought.  While others dream of vacations and happy places, I’m haunted by 250 lb shredded workhorses, just begging me to overlook them this year.  Nights are filled with tossing and turning, exasperated screams into pillows, and mumblings my poor Bumble dates try to decipher:

“Who’s Willie Snead? And why were you screaming, ‘Give me the Blonde Muskrat!’ in your sleep?”

Lately, one player has been torturing my evenings more than any other: Adrian Peterson. What the hell does this future Hall-of-Famer have in store for 2017?

Most experts seem to only be emphasizing his floor.  This is fair, given Peterson’s age and recent injury track record: Only three running backs in NFL history have topped 1,000 yards at age 32, and any backs 30 and beyond are major injury risks. Peterson’s also joining a pass-first, primarily shotgun based attack that doesn’t seem to fit his strengths. He’s also coming off essentially an  injury-lost season where he looked completely sapped on the few games he played (1.9 YPC).

Yet, the negatives seem to be all “experts” are focusing on. What about his gigantic ceiling?

For one, let’s look at just the rushing potential. This offense will constantly reside in the red zone, where Peterson, one of the strongest goal line hammers in NFL history, will monopolize touches. 12+ TDs are well within reach, whether or not AP can buck history and approach 1,000 yards.

Additionally, AP plays behind an extremely injury-prone Mark Ingram, and “All-Day” seems destined to make at least a few featured back starts. This team has prioritized beefing up the line over the last three years, and their road-grinders graded out towards the top PFF’s top run-blocking line ranks in 2016.  Even if the rushing volume isn’t enormous, the quality of these touches will be high upside, making 900+ rushing yards realistic, in addition to the league-leading TD upside. After all, AP did just lead the NFL in rushing two seasons ago at age 30, behind a wholly sub-par line.

Plus, while AP isn’t going to fool anyone as Darren Sproles reincarnated, his receiving abilities are often undersold. As the generational back stated himself: “It’s always funny to me because I’ve been playing this game since I was 7, and a lot of people say, ‘Well, he can’t catch the ball,’…I’ve been playing since I was 7 years old. I can catch a football…It’s all about having a guy that’s going to get the ball to you, and without a doubt I know (Drew) Brees is going to. We’ll be doing that.”

He isn’t wrong in citing quarterback woes and poor utilization as major cripplers in his receiving history.  In the two seasons Peterson played with Brett Favre and wasn’t shackled by the Gus Frerottes and Christian Ponders of the world, he had 43 catches for 436 yards in 2009 and 36 catches for 341 yards in 2010. World-breaking? No. But certainly achievable numbers with a QB like Brees. Perhaps AP’s goal of 500+ receiving yards isn’t completely outlandish.

And finally, we get to dive into the latest, truly tug-worthy material about AP’s current shape.  Yes, these notes come from padless practices, as well as teammates who obviously aren’t going to be negative. Still, just try to avoid fantasy movement downstairs with a couple of these lines:

After you clean yourself off, don’t forget how no back feeds off doubt quite like Adrian Peterson. Remember, back in 2009, coming off an ACL surgery, the critics all claimed AP would need at least half the year to get back to form… if ever.  The future Hall of Famer responded by nearly breaking the all time rushing record with 2,097 yards and 12 TDs. Fast forward to modern times, the critics again are out in full force, some even labeling him a “glorified fullback at this point in his career.”  AP doesn’t ignore them, but again uses them as fuel, noting:

“It definitely motivates me… I do want to show people that, Hey, age is all up here. It’s mental. Take care of your body and do the right things, you can do some incredible things…I’d be lying to you say it doesn’t give you a chip (on your shoulder). Especially being a competitor.

Stir in a “Revenge Game” against the Vikings to open 2017, and the recipe is ripe for a major rebound. Would you be shocked to see him rip off 130 and 2 TDs and monopolize first and second down touches for the rest of the year?

So while, of course, there’s a seriously low floor with a 32-year old back switching to a seemingly ill-fitting system, this ceiling is equally undeniable.  At his current Expert Consensus Ranking of #73, this upside is also being completely ignored — do so at your own peril, or be a Wolf and capitalize on one of the lowest priced, but highest raised ceilings in fantasy football right now