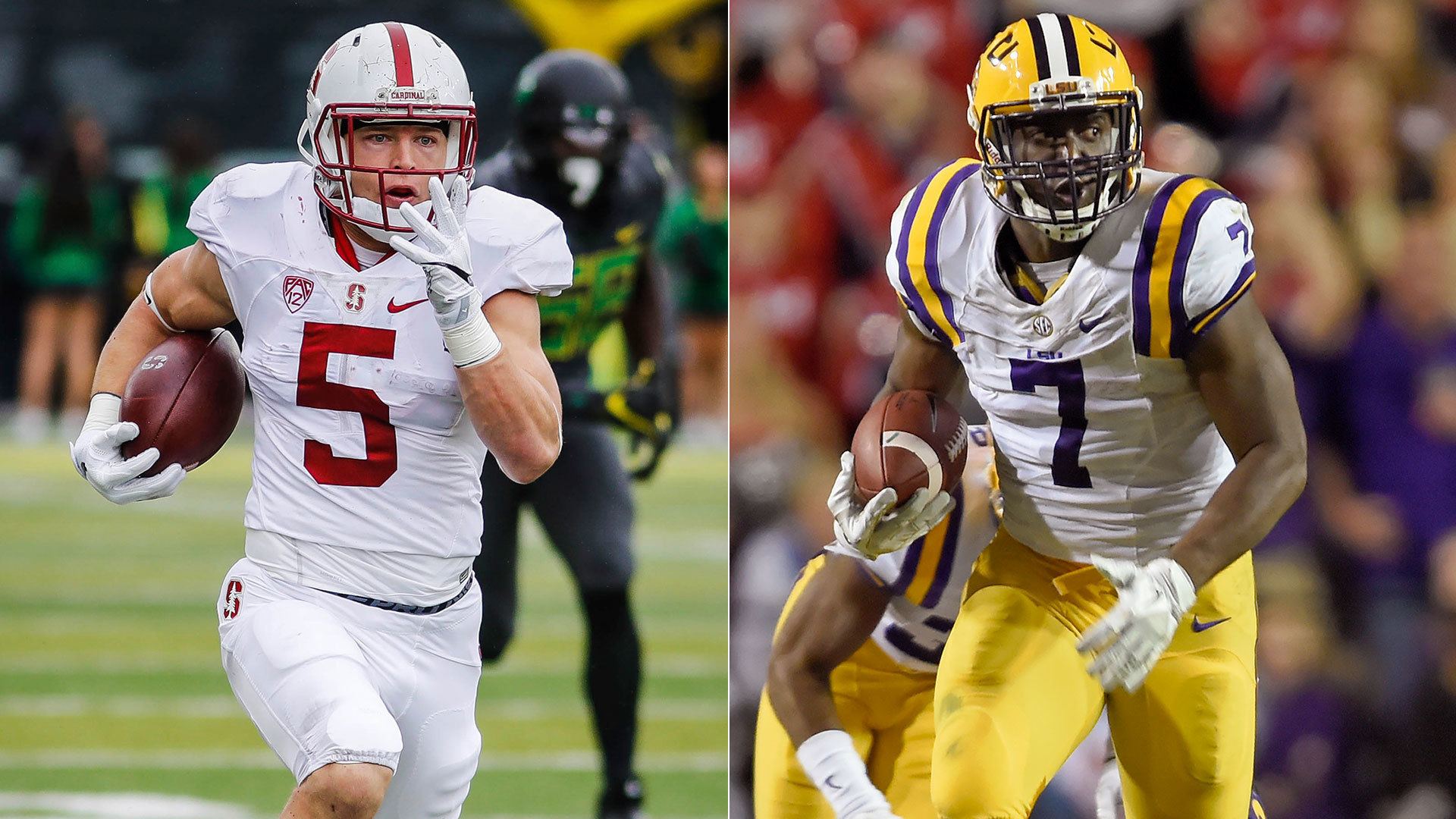 If you didn't catch our rookie running back preview with NFL Draft Insider Jared Tokarz, here are some of the key fantasy points that we learned.

In a slight change of pace from their recent fantasy team previews, The Wolf and the Truth over at the Fantasy Fullback Dive (subscribe on iTunes here and Stitcher here) met up with NFL Draft Insider Jared Tokarz recently to talk about the crop of rookie running backs that’s preparing to kick off their NFL careers in 2017. Here’s the episode. This year boasts an especially deep class at running back, from 1st round stars like Leonard Fournette and Christian McCaffrey to late-round steal candidates like Kareem Hunt and D’Onta Foreman. But which guys are going to have fantasy relevance? Which will only be handcuffs at best in their rookie campaigns?

As always, here’s the 5 biggest takeaways from the interview that’ll help you in your fantasy draft preparations.

1. Leonard Fournette and Christian McCaffrey both boast RB1 potential, but McCaffrey has the higher ceiling

As the first two running backs selected in this year’s draft, it makes sense that Leonard Fournette and Christian McCaffrey would have the two highest fantasy ceilings for their rookie seasons. Both boast a great deal of talent and find themselves in situations where they’ll have a chance to perform, and both deserve to be on fantasy rosters by the end of your draft. But the back our expert chose as the top rookie performer may surprise you.

“I’ve been a huge Christian McCaffrey fan for a while… You’ve got Jonathan Stewart there, I still think he’s going to get the majority of the first down runs, but 2nd down, 3rd down, it’s going to be a heavy dose of McCaffrey. They’re going to get creative with him. In terms of ceiling, I think his ceiling is much higher than Fournette.”

Now, some may see Fournette’s NFL-ready body and superstar acceleration and laugh at the shifty white kid from Stanford having more pro success, but it makes sense. Fournette should get a healthy amount of carries in Jacksonville, but McCaffrey finds himself on a more talented offense and in a much more lucrative role. As Tokarz reiterated, McCaffrey will have opportunities catching passes out of the backfield and in the slot on top of typical running back duties. This will undoubtedly increase his production and fantasy prospects, especially in PPR formats. He may not be an instant star, but McCaffrey’s ceiling from a fantasy perspective is the more appealing situation.

2. D’Onta Foreman could vulture Lamar Miller’s touchdowns, and should be on fantasy radars

Coming off a senior season with over 2,000 yards and a Doak Walker Award for his efforts, D’Onta Foreman out of Texas could very well be the steal of the 2017 NFL Draft. The Texans grabbed him with the 89th overall pick, and although he’ll battle Lamar Miller and Alfred Blue for carries, there’s no doubt Foreman will get some opportunities as a rookie. Our expert even thinks that Foreman could take over the “vulture” role, a la Mike Gillislee, snagging Miller’s TD opportunities once the team gets into the red zone.

“D’Onta Foreman for the Texans, I know they have Lamar Miller there… I think he’s going to be the one for the Texans that’s going to be getting those looks in the red zone. Miller is more of an east to west runner, and Foreman can hit the hole hard and get those tough yards.”

Not only does this scare the shit out of anyone planning on relying on Lamar Miller for RB1 production, but this certainly opens up Foreman for a late selection in your fantasy draft if you’ve got the space. He’s a big guy at over 230 pounds, but he’s deceptively fast and can break off a big run in a hurry. And, of course, there’s the possibility of a healthy dose of red zone opportunities to steal TDs away from Miller and Blue.

3. Dalvin Cook’s role on the Vikings diminishes his fantasy value

“Poor combine showing… people have figured out he’s not as explosive than they actually thought he was. Latavius Murray, he had a pretty good season last year with the Raiders, I think he’s going to get a bulk of those red zone carries, at least in the beginning. I think Cook might be good for 4 or 5 touchdowns, 500 yards.”

Our guys have been down on Dalvin Cook out of FSU, The Wolf’s RB37 for 2017, and for good reason. Not only has he struggled with fumbles, injuries, and off-field issues — basically the triple crown for bust running backs — but he finds himself in a less-than-ideal situation in Minnesota. Latavius Murray just moved to town after a solid season in Oakland, and he’s got his eyes set on what used to be Adrian Peterson’s role. That’ll leave little room for guys like Cook and Jerick McKinnon, leaving them to fill smaller, less fantasy relevant roles.

Cook isn’t necessarily doomed in Minnesota, and his fantasy prospects could rise in coming years as he grows up, but for 2017 he won’t be headlining any rosters.

4. Joe Mixon could be a steady workhorse in Cincinnati

Now, if you’re someone who prides themselves on integrity with their fantasy roster, you’re probably steering clear of Joe Mixon anyway. He’s certainly had his troubles in the past, and teaming up with Pacman Jones and Vontaze Burfict on the team with the 2nd-most arrests in the league since 2000 isn’t a great sign, either. But from a football standpoint, this was a great pickup for Cincinnati. Mixon averaged almost 7 yards per carry in his collegiate career, and he racked up over 2,000 yards in 2 seasons at Oklahoma, facing some sturdy competition in the Big 12.

Mixon now finds himself fighting veterans Jeremy Hill and Giovani Bernard for carries in his rookie season, but our expert thinks he’ll find a way to contribute in a reasonable amount of time.

“Going into the draft, the majority of the scouts I spoke to thought that he had cleaned up his act — obviously what he did was terribly wrong — but he kind of had his head on straight, he knew that he was down to his last chance. I think Mixon is actually going to be a solid fit there. Jeremy Hill isn’t exciting to me — I think Mixon is going to be the ones breaking those long runs. I think you’ll see a bunch of those this year.”

It may take him a while to get going at the beginning of the year, but once he settles into a role on the Bengals, Mixon should be a consistent fantasy weapon in 2017.

It happens every year: you hear your buddy or some schlub on ESPN talking about a late-round RB selection who was overlooked in college and could breakout as a rookie. You study up, you fall in love with this guy, and you grab him at the end of your draft as the rest of the league says, “Who?” What idiots, you think. They didn’t do their research — you did.

And what happens? That dude rides the bench all season and you’re forced to find another back on waivers in Week 7. The simple solution is the same that lonely single girls tell each other when they get cheated on or treated like shit: don’t fall in love with a guy until he proves his worth. Don’t go head over heels for the looks or the money until he shows you that he can get on the 9-5 grind and make himself worth something. And the same goes for rookie running backs. There’s a reason that these teams waited 3 or 4 rounds to pick these guys up, and it’s because they still have work to be done. Some squads don’t really have room for another RB on their depth chart yet. Some of these backs need more grooming before they’re ready for NFL action. Whatever the case may be, don’t get too antsy and use a late-round pick on a guy like Kareem Hunt or Samaje Perine before you know what kind of production you can realistically expect from them.