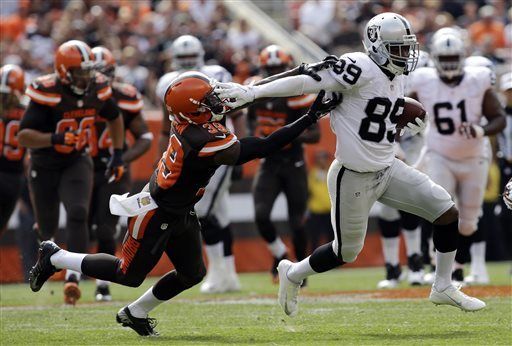 Though his career has been riddled with inconsistency, Amari Cooper appears set to stabilize his massive WR1 upside.

Raiders WR Amari Cooper has been putting on a show in OTAs, and though he’s taken over games in the past, Cooper’s teammates feel he’s ready to dominate every single week.

Ah, I love a good Premature EjOTAlation. Nothing like sending players flying up and down the rankings during non-contact practice in shorts and helmets.

Sarcasm aside, plenty of useful notes can emerge. Maybe a player is being utilized in new, creative ways. Perhaps improved habits have someone in the best shape of their career. Maybe a new coach’s scheme is beginning to unfold.

So while caution is advised while sifting through blurbs this early, I always love hearing about a newfound target hog; Amari Cooper, who seems to be trending in this direction. I absolutely love this guy, and have widely-owned him in both of his first two seasons because I am enamored with his natural ability.

Yet, I am equally well-aware of his maddening inconsistency — both in terms of targets and on-field performance. Hell, Rishard Matthews had more double-digit half-ppr games last season, despite only starting nine contests.  Given that he has an actually competent quarterback, Derek Carr has never simply funneled looks to his number one guy; in fact, Michael Crabtree has out-targeted Cooper two straight seasons given the more favorable coverage match-ups he draws. Plus, Cooper himself just seemed burnt out to end two straight seasons.

However, if OTAs are any indication (with a grain of salt, of course), Cooper appears ready to break both trends and stabilize his massive WR1 potential.

According to the Vegas Review Journal, Cooper has been flat-out dominant, winning nearly every route uncontested while making body contorting grabs over d-backs if actually ever covered:

“The first Amari Cooper casualty Tuesday was Sean Smith, as the Raiders’ wide receiver sprinted past the veteran cornerback on a deep Derek Carr pass in stride for a long touchdown…The second Cooper casualty was cornerback David Amerson. This time Carr trusted Cooper to wrangle a pass in traffic during a two-minute drill. Cooper did, high-pointing the football before falling onto the turf for a first down.

The changes are reportedly both physical, with Cooper adding muscle while maintaining his speed, and, even more importantly, mental:

To the casual observer, Cooper has bulked up his physique since the end of the 2016 campaign. That change is obvious, one that can be measured with a tape measure. There is something else, though, that his quarterback sees in the third-year wide receiver.

“That dog in him is coming out,” Carr said. “That thing you saw at Alabama where he’d just take games over. Not to say that he hasn’t because he has, but I think it’s not just becoming a thing of, ‘What game is it going to be?’ It’s becoming a thing of, ‘That’s who he is.’ (Defensive backs) better know that he’s really taking it serious, that he’s trying to go attack them this year. He’s not going to let them come to him this year. That just comes with age.”

Of course dominating corners in non-contact practice is never the sole precursor to a dominant season.  Nonetheless, I love players who seem to have undergone a “mental shift,” and Cooper, in letting “the dog” come out, sounds as though he’s practicing (and thrashing dbs) harder than ever before.

Moreover, Cooper’s newfound “attacking” approach appears to be winning over Carr, who may be more willing to chuck it up and let the third year wideout “take games over” the more he performs like this.  The Raiders target pendulum already seemed destined to swing Cooper’s way, but these type of reports all-but confirm this.

All-in-all, Cooper’s inconsistent usage and performance appear set to be neutralized. This improves his “Usage” score, and sends him shooting from my WR14 to WR11.  To maintain this spot, or even ascend further, Cooper will need to keep up this type of performance once the pads come on. I undoubtedly think he will.

Though I’d still prefer Cooper be treated as the highest-end WR2, I’d be comfortable with him as my WR1 if I have two studly backs. He is brimming with upside and makes a fantastic selection in the late second, early third range.