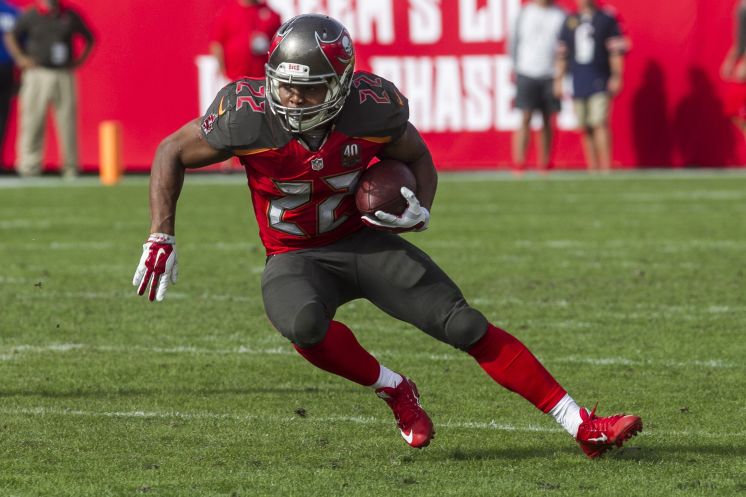 After a down 2016 followed by a suspension, the RSJ is high on Doug Martin for '17, while the "experts" are sleeping on him.

Buccaneers RB Doug Martin impressing so far in camp, looks ready to bounce back to 2015 form.

Doug Martin is going to be one of the most intriguing fantasy prospects this year. After a fantastic 2015 season where he finished second in the league with 1,402 yards, along with 6 touchdowns, Martin was commonly a second 2016 second rounder. He “rewarded” owners with only eight games played, while rushing for 421 yards and 3 scores. Very disappointing to say the least for those who wasted a high pick on him.

Now, we enter the 2017 season with Martin’s stock relatively low after such a down year. On top of that, he’s suspended for the first three games of the season after running into problems with the NFL’s drug policy. Everything about Martin’s stock screams “stay away” after going through so much trouble. While other fantasy sites and sheep alike continue to rank Martin so low amongst running backs, our fearless leader The Wolf  is howling at the moon over Martin’s fantasy potential. One major site (cough, cough, World Wide Leader) has Martin at RB38 below names like James White, Gio Bernard and LeGarrette Blount. Yahoo’s dumbasses also have him criminally low at RB 39 behind Jonathan Stewart, Danny Woodhead and Derrick Henry. Thankfully we have The Wolf on hand to set everyone straight and talk some sense around these parts.

Currently sitting at RB21 in his rankings, The Wolf is very high on Doug Martin this year. Part of it comes from Martin’s sheer will to bounce back and correct his past mistakes both on and off the field. He’s looked impressively good in camp thus far, leaving many convinced he’s due for redemption. Another big part of Martin’s ascension comes from the sexy offense that’s likely to be unveiled in Tampa Bay. The key off-season additions of DeSean Jackson through free agency and OJ Howard in the draft gives the team more weapons to work with. Jameis Winston appears to be ready to lead this team and take the Buccaneers to the next level in his third year in the NFL.

With such a promising offensive attack, this should set up nicely for Martin’s return to a reliable fantasy RB that fits snug into your RB2 lineup spot. There’s the chance he even becomes a RB1 to owners if he could regain his former Muscle Hamster form, but right now he’s currently sitting in Tier 4 of remaining RBs in the C/C+ Fantasy Stock Score range, mainly because of a low “Risk” score; every other category grades out in the A or B range.  If his rankings on other sites continues to be low, you can easily steal Martin in the middle rounds of your draft and walk away with a bonafide starter at such a prime position. Sure, he’s going to miss three games to start, but that will only keep his rankings down for the time being. If you do end up taking Martin, make sure you grab Jacquizz Rodgers at the end of your draft, who filled in admirably last season and can be a plug-and-play RB2 for Weeks 1-3.

Doug Martin is one of our biggest guys for the RSJ this off season, as most people seem to be sleeping on such big potential. With solid running back production hard to come by these days, Martin possesses the talent, heavy rushing scheme, surrounding skill players, and usage to be a highly valuable fantasy asset at an extremely low price; hell, his high-risk is essentially neutralized based on his minimal cost. His mind and body seem to be right, and Martin’s always been a monster when this is the case. We’re all in on Doug Martin this year. You should be too.