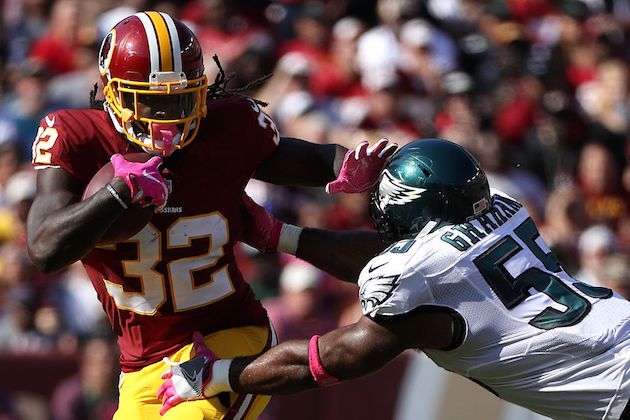 Samaje Perine has garnered tons of positive buzz, so Rob Kelley made sure to remind fantasy owners who's atop the depth chart... for now.

RB “Fat” Rob Kelley is shredding himself up, dropping his body fat from 18 percent as 13 percent, as he attempts to hold off fourth round rookie Samaje Perine for a lead RB role with oodles of TD potential.

Meanwhile, Perine falls with Gruden acknowledging Kelley as the current leader, but could shoot back up with a strong Training Camp showing.

Though Perine was our early favorite to open 2017 as Washington’s starter, it sounds as if the incumbent Kelley is doing all he can to maintain a strong hold on his starting job. Indeed, Perine has the talent to unseat Kelley, and has also drawn rave reviews from coach Jay Gruden and beat writers alike throughout rookie camp. Nonetheless, Gruden’s most recent comments suggest Kelley is in the driver’s seat:

“Now he’s the guy, so it’s exciting to see how far he’s come in a short period of time,” Gruden said. “With that experience comes confidence. He’s more confident with every rep he takes. … Now it’s just natural to him. He can be a runner and he’s very gifted in that regard, finding holes and running through people.“

Kelley is doing everything in his power to maintain this grip, cutting out chips and soda and instead eating like a standard adult; in the process, he’s cut his body fat from 18 to 13% and is moving with more explosiveness as a result: “I feel more explosive, faster, getting in and out of cuts a little better,” Kelley said.

The sophomore big-back is well aware of the RB battle he’s engaged in, and wasn’t sugarcoating his motivation to maintain a stranglehold on the gig:

“It’s hard not to say you don’t feel some type [of pressure] when they bring another back in,” Kelley said. “But it’s the [NFL], someone comes in every year to try and take your job. If Samaje comes in here and does what he has to do, it’s not his fault if he’s playing better. I have to play better than him so I don’t feel no type of way. It’s all on me.”

Kelley is not only shredding his body, but also expanding his skillset, particularly in the receiving game to make three-down work a very real possibility:

To strengthen his grip on the starting job, Kelley worked this offseason on catching the ball better. It wasn’t as much his hands as it was his focus: At Tulane, coaches said Kelley caught the ball well.

“For some reason it was hard for me to catch the ball and I had to get back to what I know best and catch the ball,” Kelley said. “It’s more just calming down and taking a deep breath and catching the ball.

“If you look at the league now all the running backs are catching the ball. If you want to be in the top tier, that’s what you have to do.”

This battle is crucial for fantasy owners to monitor, as the lead back role in Washington could yield low-end RB1 numbers with the right usage. The Surrounding Talent scores incredibly high here, with a top-seven run blocking line, a strong signal caller in Kirk Cousins that will keep this offense on the field and in the red area, plus some explosive skill players to keep boxes light. Additionally, it sounds as if the normally pass-happy Gruden would like to establish the run game more, as ESPN noted: “He said last week that Gruden told him the team would run more. The Redskins want to use more play-action passes, which means, potentially, more runs.”

Indeed, this battle is far from over, and, alongside Kansas City and Green Bay, is one of the most crucial storylines for fantasy owners to track this offseason.