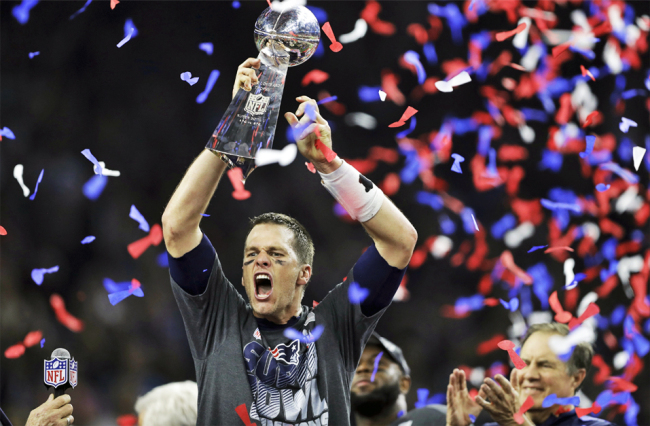 With the most clutch comeback performance in the history of sports, Tom Brady has ended any lingering doubt.

The debate should have never even existed. After a historic Super Bowl 51, the door has been emphatically closed, the haters have been silenced, and Patriots fans’ beliefs have been more convincingly confirmed than ever before:  Tom Brady is the best quarterback to ever pick up a football. Trying to say otherwise is flat out wrong and stupid.

Really, the only thing left for discussion is whether or not Tom Brady is Jesus reincarnated.

Truly though, not even the most talented of writers could’ve penned a more perfect script to cement a legacy. Sure, Brady really just needed to become the first and only quarterback to win a fifth ring to silence the critics. Instead and in typical Tom fashion, he obliterated records, rewrote history, and reminded the world that impossible is nothing with the most epic late-game performance by any athlete, in any sport, bar none.

Consider the odds. No team had ever overcome a 10 point deficit in Super Bowl history; Brady and co trailed by 25 deep into the third.  Literally a .4% chance, according to the computers:

Yet, in the darkest moments, when light seems impossible to find, Brady shines the brightest. That’s what GOATs do.

So, of course, the gaudy, record breaking stats from Sunday are breathtaking: a Super Bowl high 62 pass attempts, for another record 43 completions, amounting to an unprecedented 466 yards.  In the process, Brady became the first QB to engineer three fourth quarter Super Bowl comebacks, raising his list of game-winning postseason drives to an astonishing 10.

All of this gets added to a jam-packed resume that includes, but is not limited to:

Brady’s legitimately the human embodiment of winning (and, again, Jesus).

Ultimately, however, these are mere numbers;  brush strokes meant to add detail and vividness to an already established masterpiece.

What more accurately captures this essence, rather, are the clips of Brady on the sidelines. His reminders to”just do your job”  when his team trailed 28-3; “Trust the process” at 28-9; “Worry about the next play” at 28-12. A confident, killer stare that never left until the Patriots made the unthinkable real:

“You just looked in his eyes,” receiver Matthew Slater said.

Eyes that, despite three quarters filled with errant throws and a pick-six likely to break any quarterbacks back, remained steady. Eyes that, once the pressure reached its peak in the final quarter, saw the entire field and found the open man 16-of-21 times for 195 yards on three straight scoring drives to tie the game up.

And, perhaps most importantly and beyond all the stats, eyes that suggested one and only one thing to his teammates and coaches: we are winning this game, no matter what.

“I believed it the entire time,” receiver Chris Hogan said. “He gave us the kick. He got everyone fired up.”

This motivational outreach extends well beyond the offensive side of the ball. Safety Duron Harmon, soaking in Brady’s aura, told his defensive mates the Patriots were about to go on the greatest comeback in NFL history. “When you have the Michael Jordan of football, that is what you think,” Harmon said. “Think about it: Last two Super Bowls we’re in, down multiple scores late, and he gets the job done.”

Thus, fully motivated to keep their cold-blooded killer within striking distance, the defense became a brick wall. In the game’s final 24 minutes, New England surrendered no points, forcing one turnover and three punts while yielding just 44 total yards and under 7 minutes of possession time… against the league’s most explosive attack.  This type of elevation, especially in the face of such seemingly impossible odds, can only be achieved with unequivocal faith and trust that their efforts are worthwhile.

It’s these intangibles, beyond the undeniable stats, that truly separate Brady from anyone who ever has, or ever will, play this amazing game.  This has always been the case, Super Bowl 51 just served as a burning reminder and undeniable awakening  to anyone somehow still in denial.  As eloquently stated by club president Jonathan Kraft:

“That game we just saw puts the exclamation point on the career of the greatest quarterback in NFL history.”

In Brady’s name we pray. Amen.