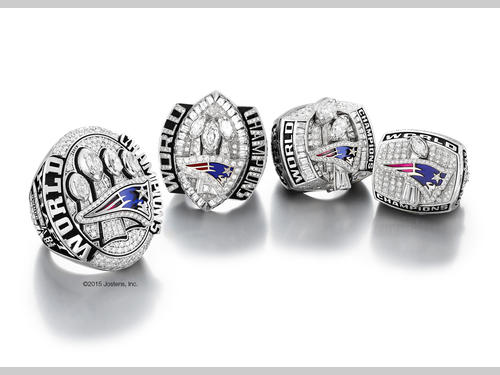 The Patriots have had plenty of playoff success. Check out our Top 5 Playoff Plays of All-time

Being a young Patriots fan means that I’ve been spoiled with the riches of New England Super Bowls and countless playoff wins. Looking back, there are a lot of great plays to choose from but these five here are ones that really stick and won’t be forgotten anytime soon. 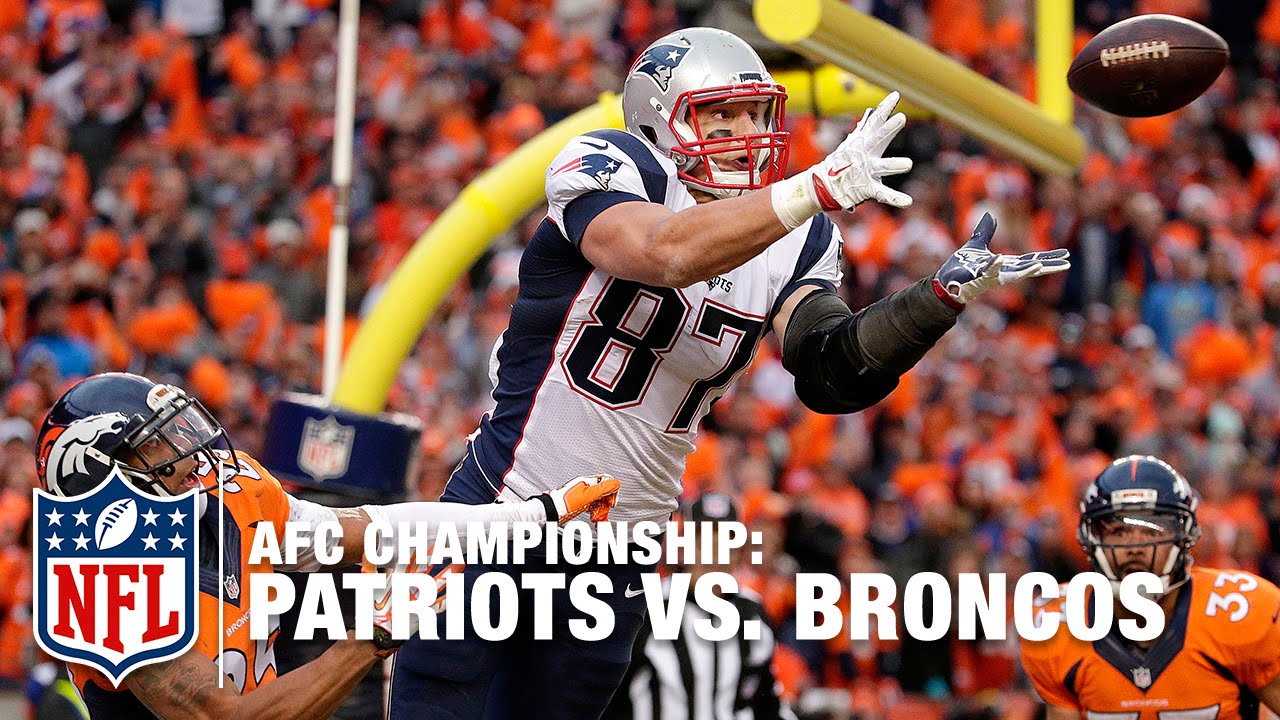 I know they lost the game, but that first throw is a thing of perfection from Brady. Absolute dime perfectly placed into Gronk’s big mitts. On fourth down no less. I also have no idea how Gronk came down with that second play. He had the presence to stay in-bounds and then beat double coverage to set up the potential game tying two point conversion. He’s an absolute force.

This was a big one because it was Tom Brady and Bill Belichick’s first Super Bowl together and there were TONS of questions surrounding Brady. Was he a good enough QB to win the big game? (lol) How would he handle the pressure of the big stage? Could he keep up with the Greatest Show on Turf? Well, Brady came out and fired this perfectly placed ball to David Patten in the back of the end zone to close out the first half. Patten had one on one coverage against Rams corner Dexter McCleon to the right side and streaked to the end zone. Brady threw a laser over the top of McCleon where only Patten could catch it. This put New England up 14-3 going into the half and effectively convinced everyone except John Madden that this Brady kid could get the job done. It was one hell of a catch from Patten who fully extended and still came down in the end zone. 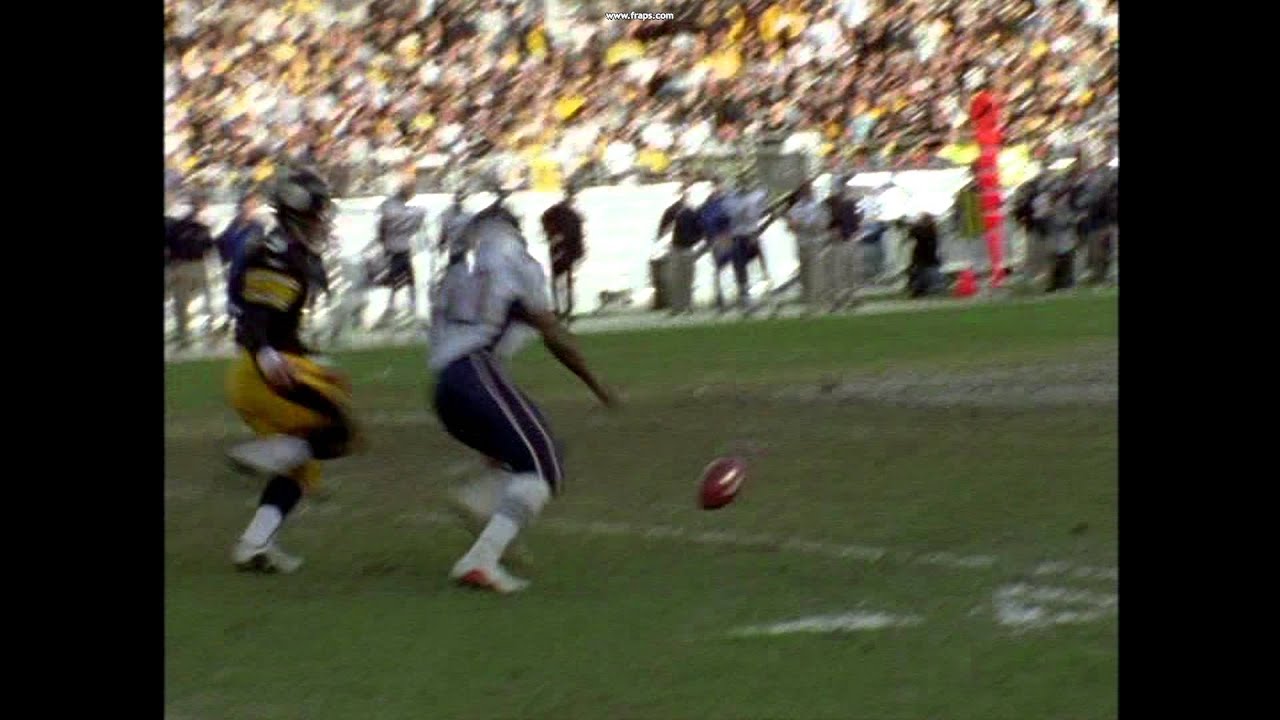 Many will remember this game because former starter turned backup QB Drew Bledsoe was forced into action after Tom Brady suffered an injury in the second quarter. While Bledsoe was great and instrumental in getting the Patriots to the Super Bowl, the real MVP of the game was do-it-all guy Troy Brown. Brown opened the scoring for the game with a 55 yard punt return touchdown, but his biggest play came in the third quarter. With the Patriots up 14-3 at the time, Pittsburgh was looking to make it a one score game with a field goal attempt. The snap was good, the kick went up, but it was blocked by Brown who picked it up around his own 40 and took off. Brown was about to be tackled by Steelers kicker Kris Brown, but astutely lateraled the ball to an open Antwan Harris. Harris streaked down the field untouched and all but guaranteed the Patriots a game in the Super Bowl. This score was the nail in the coffin for the Steelers who struggled to get any offense put together. 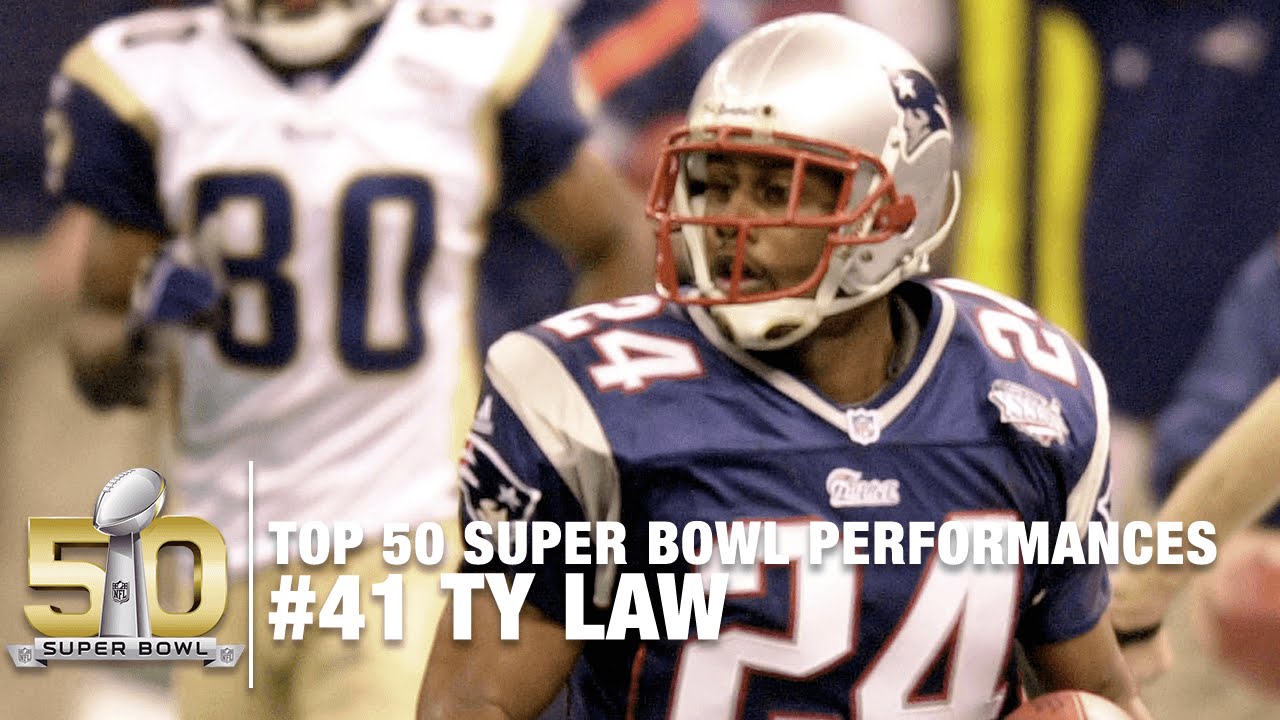 Let me start with saying that Ty Law is one BAD dude. One of my favorite Patriots players of all time. The St Louis Rams were 14 point favorites heading into the game which shows just how under appreciated and overlooked this Patriots team was at the time. The defense was the backbone of this Patriots team and what had to be stellar to stop the Greatest Show on Turf if New England wanted a victory. The Rams led 3-0 after the first quarter, leaving Patriots fans eager for a spark or sign of life. New England then drew up a blitz for Mike Vrabel who effortlessly got to Rams QB Kurt Warner, forcing up a desperation throw. Isaac Bruce was the intended receiver, but the throw was long and Bruce looked lost on the route. Law caught the ball square between his numbers and took off for the end zone untouched. This was exactly what New England needed to give them life and knock the Rams back on their heels. Law’s interception was undoubtedly the turning point of the game where everyone realized just how good this defensive unit was.

#2 2015 Divisional Round – Edelman to Amendola vs Ravens 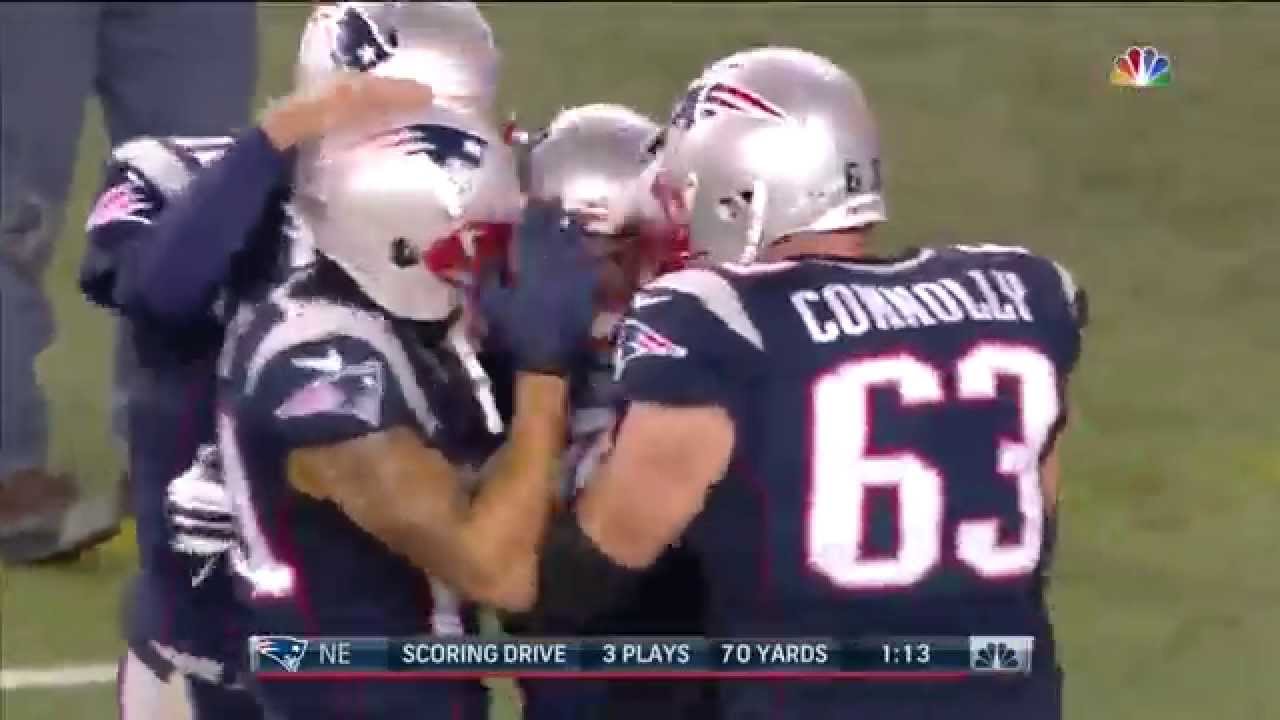 There is no Ring #4 without this play here. The Baltimore Ravens have been a long time thorn in the side of the Patriots, and they came into Foxboro and punched New England square in the mouth. All of Patriots Nation was in disbelief at what Baltimore was doing and how effortlessly they were putting up points. This looked like 2012 or 2009 all over again where a better Patriots team was somehow going to lose to Joe Flacco and the Ravens. New England had no momentum and decided to reach into the old bag of tricks. Recevier Julian Edelman went into motion lining up behind two other receivers Danny Amendola and Rob Gronkowski. Tom Brady took the snap and immediately threw it to Edelman behind the line of scrimmage. It looked like a standard Patriots screen as Gronkowski stayed around the line of scrimmage to block, but Amendola took off downfield. The Ravens linebackers sat in place waiting for Edelman to start running towards them only to realize he wasn’t going anywhere. The former Kent State QB threw his first ever NFL pass attempt perfectly into Amendola’s arms who beat the corners and safety into the end zone. The crowd erupted, the momentum had swung, and all but everyone knew the Patriots would win this game. 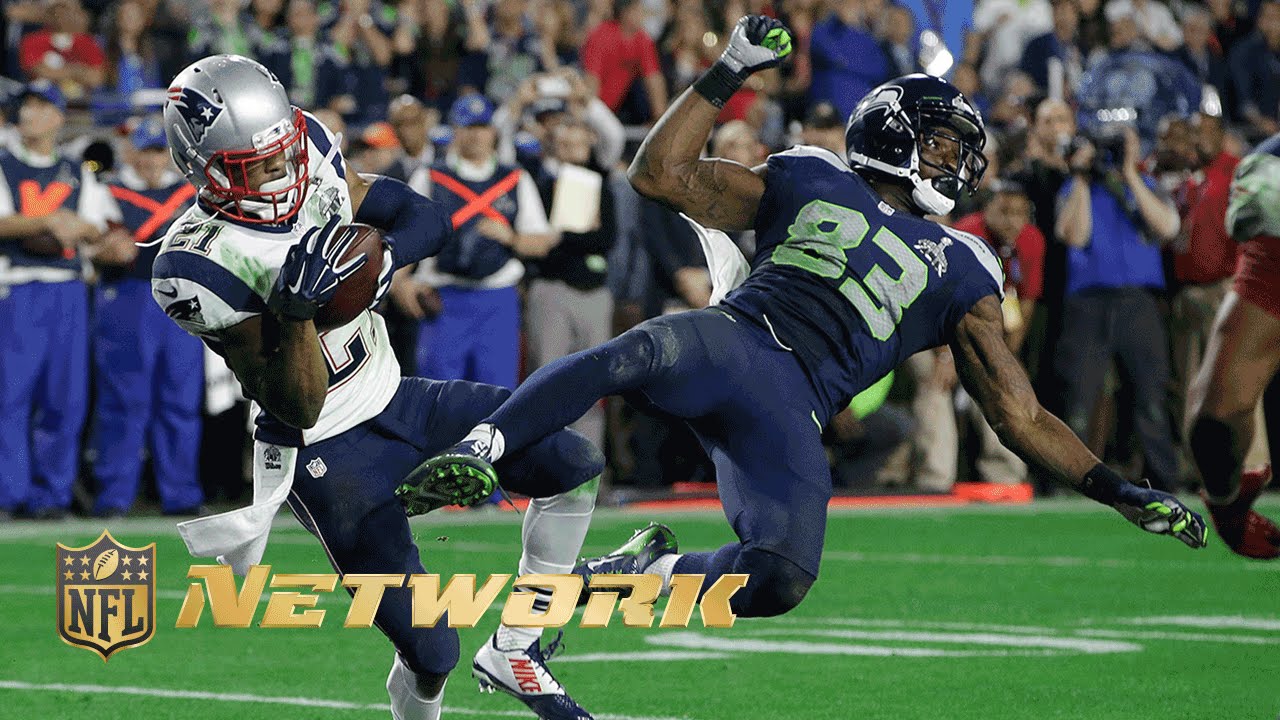 This. This goddamn play man. I had to stop writing this to watch that video after pasting it and I started tearing up. So much emotion. A little backstory here:

I’m at my buddy Dan’s place watching this game. We had watched every Super Bowl together since the Rams so we had been coming off back to back losses against the Giants. It was a tense atmosphere. The game was a pickem so you could go either way, that’s how close these two teams were. I couldn’t handle a third straight loss but you always believe in Tom Brady.

Fast forward to that last Seahawks drive. New England had just taken the lead on a Julian Edelman 3-yard score with 2:02 left in the game. That’s a lot of clock  when you have had Tom Brady win countless games on final drives so you’re not completely confident in what will happen next. Then, Russell Wilson drops back to pass and fires a deep ball to Jermaine Kearse. My heart stops (metaphorically). I watch that ball float for what seems like an eternity. Malcolm Butler goes up and gets a hand on the ball, phew! Great defense there by a guy I’ve basically never heard of. I see the ball bounce off what I think was the turf. Then I see Kearse reach up and pull the ball in while Butler scrambles back to push him out of bounds. What the hell is going on? The referee places the ball at the 5 yard line and nothing makes sense in the moment. The apartment is dead silent and they start showing the replays of the ball hitting Kearse’s body and bouncing up thus making it a clean catch. My body goes numb. I can’t feel or hear anything as I’m starting at the TV screen. I start having a Harry Stamper-esque flashback from Armageddon where I see the Tyree Helmet catch, Plaxico Burress abusing Ellis Hobbs, and Mario Manningham toe tapping to the sidelines. I don’t think I’m exaggerating when I saw this was probably the lowest point in my entire life. I felt so hopeless and defeated. I wasn’t prepared to go through all this pain once again.

And then two plays later, everything would change. From the lowest of lows to the highest of highs. I’ve never screamed/cheered so loud in my entire life when Butler intercepted that pass. The apartment went into a state of frenzy as everyone jumped up and down while hugging one another. Tears flowing, alcohol flying, apartments shaking. It was a scene for the ages. There will never be a greater change of emotion in a 5 minute span.

So that was my experience of the Malcolm Butler interception. Every Patriots fan will remember where they were and what happened that day. The video does an amazing job showing the detail and preparation going into that one specific play for one specific scenario. It’s crazy how much goes on behind the scenes that you don’t even realize go into and play part in a giant game plan. Seahawks QB Russell Wilson was lined up in shotgun with Marshawn Lynch to his side. I expected a draw up the middle, but Seattle decided to pass. Kearse engaged corner Brandon Browner and sealed a lane for Ricardo Lockette to come across the middle. The pick play would stop Browner from following Lockette across the middle leaving Butler as the lone guy capable of making a play. Butler lined up behind Browner and was a good three yards deep in the end zone. Thanks to Ernie Adams/#PinkStripes, Butler read the play and sprinted in to cut off the route. To this day, I still don’t know how Butler came away with it. Lockette was in between Butler and Wilson seemingly blocking Butler from the ball. Lockette never saw Butler coming who just reached in and snatched a Super Bowl right from Seattle’s arms. It was a thing of beauty and will go down as one of the greatest Super Bowl plays of all-time.

PS: thanks for making that tackle Dont’a Hightower. We never forget.