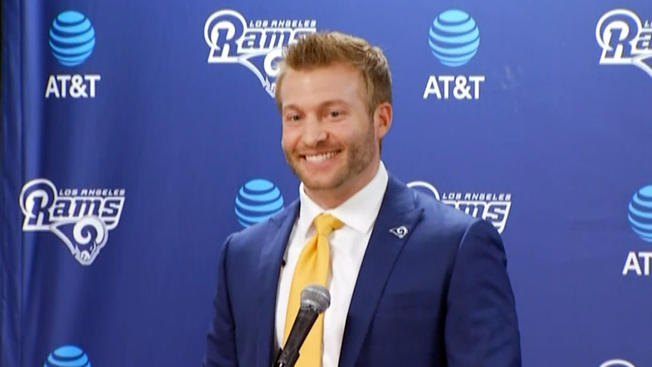 Will the youngest head coach in NFL history make the Rams fantasy-relevant?

Today is the start of a brand new series where we break down NFL coaching changes and analyze what each newly hired coach can do for their respected organization. This is the first edition, and who could be better to start this off than the youngest Head Coach in NFL History? The man taking the fantasy football and media world and by storm. We’re starting off our Coaching Corner this week with the Los Angeles Rams’ pathfinder, Sean McVay.

Sean McVay played college football at Miami University (Ohio) as a wide receiver, and shortly after graduating he became a coaching assistant for the Tampa Bay Buccaneers under head coach Jon Gruden in 2008. The following year, Jon Gruden was released, clearing the coaching staff underneath him, so McVay went to work below another Gruden, his brother Jay.

At the time, Jay Gruden was the offensive coordinator for the Florida Tuskers, of the UFL (United Football League), and he brought Sean onboard to be the tight ends coach in 2009. After that short stint, McVay found himself back in the NFL in 2010 as a part of the Washington Redskins as an offensive assistant before landing the job as tight ends coach in 2011. Two years later, the Redskins drafted Jordan Reed, and the following year (2014) promoted McVay to be their Offensive Coordinator/Quarterbacks coach. After putting the pieces together, McVay began to mold the young talent and in 2015, both Kirk Cousins and Jordan Reed set Redskins records.

Many people doubted Kirk Cousins after the 2015 season, and many media outlets were calling him and the Washington Redskins offense fluky, but they shut everyone up. Cousins continued to ball out and shattered almost all of those records again in 2016, and McVay was recently quoted saying that Cousins is “a guy you could absolutely win a championship with.” Would that be the case without Sean McVay?

Can Jared Goff become the next Kirk Cousins?

McVay molded a young Kirk Cousins — a guy who was behind RGIII — into a legitimate starting NFL quarterback. A young guy who was just trying to find his footing in the NFL. A young guy who showed all the tools to be a star. A young guy who needed guidance. Do you see where I’m going with this? A young guy just like Jared Goff. Sean McVay knows how to work with quarterbacks, and so does the recently hired quarterbacks coach Greg Olson. Olson has been around for a long time as he worked with Drew Brees dating back to his Purdue days, and recently worked with Derek Carr and Blake Bortles. With these two together, Goff will get the help he needs to become a more advanced player, we’ll just have to see how talented he’ll become.

As we look back at the Los Angeles Rams 2016 season, there’s really nothing you can point out as a bright spot. They were second in yards lost due to sacks and second in number of times sacked. Without a good offensive line, it will be hard to see a change in Goff. Same goes for Todd Gurley, as the Rams were 31st in yards per rushing attempt last year. The team was abysmal last season as they were dead last in total yards/yards per game, and 3rd in interceptions thrown. Lets just say Sean McVay has his hands full and this won’t be an overnight change.

On the other side of the ball, the Rams defense was middle of the pack when it came to performance. They didn’t stand out one bit, but the addition of Wade Phillips really shows that this team wants to win as soon as possible. Now I shouldn’t have to give much of an introduction for Phillips, but he recently won Super Bowl 50 with the Denver Broncos as their defensive coordinator, and also won assistant coach of the year that season. Wade is a defensive mastermind working as a linebackers coach and d-line coach, along with his defensive coordinator and head coaching experience. He seems like the perfect guy to help mold Sean McVay while also filling in the defensive knowledge that McVay is lacking.

As I referenced earlier, this isn’t going to be a overnight change, but the pieces are falling into place. So lets take a look and break down all the key fantasy positions.

Jared Goff will have to put in work this offseason to build upon his underwhelming rookie year. He has the stature of a star quarterback, as he’s 6’4″ 205 lbs and showed that he has the natural talent that made him the No. 1 overall pick. Not to mention, he’ll come into the 2017 season as a 22 year old. I hate to keep comparing, but if he shows as much drive and continues to work on his game just as Kirk Cousins did, he should make great improvements this offseason.

The player everyone has had the most questions about was the 2015 rookie standout, Todd Gurley. Someone who was constantly on our Fantasy Sit List just couldn’t seem to get it going this season, and that’s not a knock on him or his talent. With no passing game, opposing defenses continued to stack the box, leaving Gurley to fend off multiple defenders in the backfield. Next season, if Goff and the offensive line make some decent strides, they should be able to take the pressure off of Gurley and turn him back into a solid RB2.

For the sake of this post, I’m going to break down Kenny Britt and Brian Quick together, due to the fact that they’re both headed for free agency this offseason.

Kenny Britt was phenomenal last season, given the circumstances, as he had 68 receptions for 1,002 yards and 5 touchdowns. He’s still only 28 so it would be a good move to bring him back due to his proven skillset and rapport with the quarterback.

Brian Quick, however, has seemed to disappear throughout certain times in his career. You can’t put lack of talent in that discussion though, I’d say it’s more of a lack of quarterback presence. Quick has been a life long Ram so he’s seen all the struggles and has had to play with seven different quarterbacks since he was drafted in 2012. The man is still only 27, so we’ll have to see if the Rams bring him back as well. As we all know, it’ll come down to the money and if Quick wants to play to McVay.

We’ve already discussed the importance that Sean McVay has had on Jordan Reed‘s career so far and with his tight end coaching background, Lance Kendricks should see a big uptick in the targets category. McVay understands how the tight end can be a safety net for quarterbacks and a 6’3″ target with 4.5 speed is certainly a good security blanket. I expect Kendricks to get a boost next year, especially if those wide receivers don’t come back.