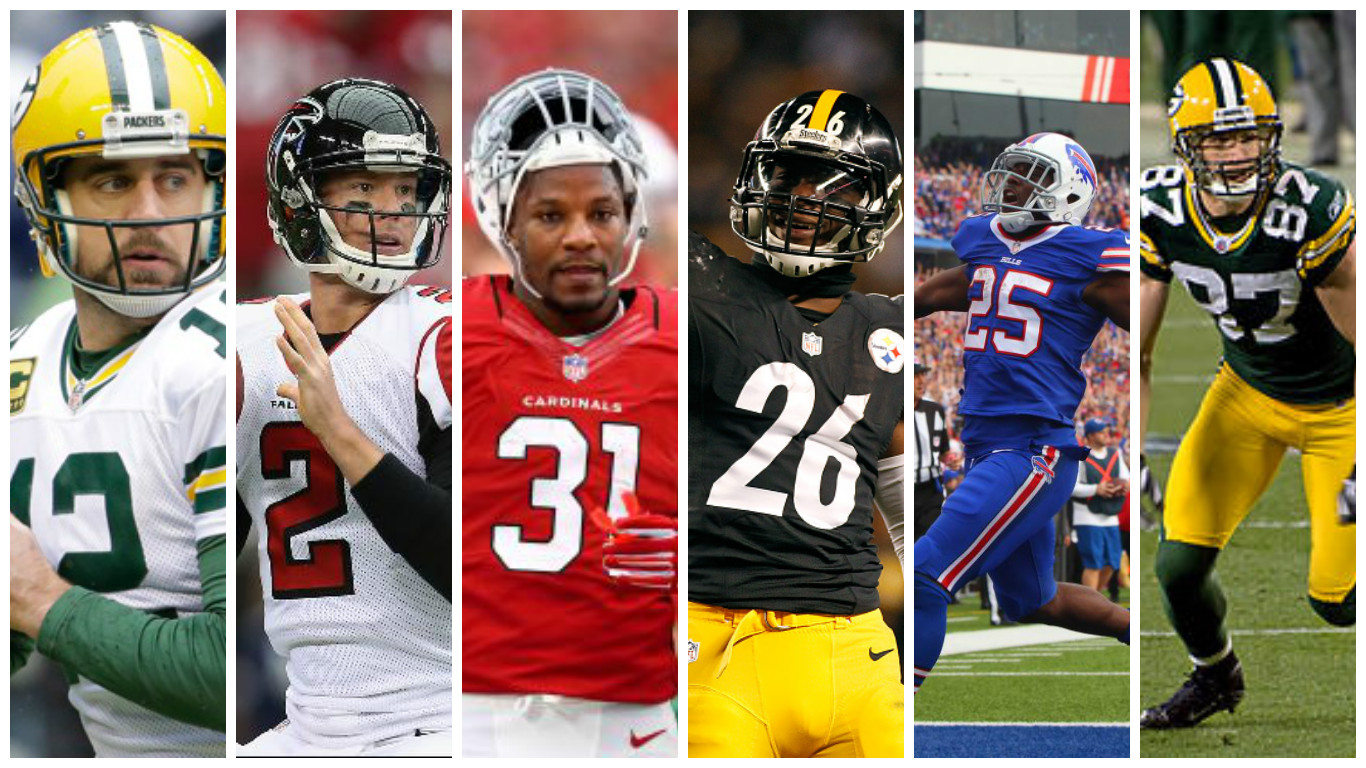 Which player took home the most coveted Roto Award? The Fantasy MVP

The Nobel Prize. Academy Awards. Pulitzers, ESPYs, and Golden Globes. While prestigious in their own rights, these honors pale in comparison to The Rotos.  In our first ever Rotos Award Show, the distinguished “Big Dick” prizes will be awarded to players with the most glorious performances in 2016, while the dreaded “Tiny Puds” will disgrace the season’s most dubious players. Grab the popcorn, place your bets, and settle in for a week of recapping the highs and lows from a wild fantasy season.  We have already given Rotos for Waiver Wire MVP,  the Top Individual Game Performance, Most Overhyped Player,  Best Draft Day Value Pick and Bounce Back Player of the Year.

Today we break down the potential MVP’s of the 2016 Fantasy Football season. These are the guys that showed up every week and were the horses leading teams to fantasy titles. If you had these players, you stood above the rest. If you didn’t, then you were filled with envy while curled up in a submissive ball. Who will win the most coveted Roto, the 2016 Fantasy Football MVP?

The consensus strategy around the RSJ was to wait on a QB and load up on skill positions. If you decided to stray away from that and land a stud QB in Rodgers, you were probably sitting pretty and watching the points come in bunches during the playoffs. Rodgers went through a rough patch in weeks 5 and 6 after his bye when many started to doubt the all-pro QB. With back-to-back sub 20 point games in those weeks, Rodgers put all that behind him and went on an absurd run to end the fantasy season with 32 touchdowns (2 rushing) and 3 interceptions. Rodgers slipped up a bit in the semi finals of Week 15, but made up for it all in the finals with a season high 37.18 points with five touchdowns. The lack of a true running game tipped the scale of the Packers offensive approach, and there was no hotter QB to end the season than Rodgers who showed up when it mattered most.

Contrarian to Rodgers, Matt Ryan was either selected very low in drafts or not at all. Owners who loaded up on skill guys only to have Matty Ice fall into their laps were doing cartwheels with the performance of the Falcons QB. Ryan finished second to Rodgers in QB scoring and was a reliable and consistent producer each and every week. Ryan’s best performance of the season came against the Carolina Panthers in Week 4 when he threw for 503 yards and 4 touchdowns which was good for 36.52 points. Matt is not only garnering talk for the Roto MVP award, but also talk for the NFL MVP award this year.

There were many question marks surrounding David Johnson heading into the fantasy season. Would he be receiving a true RB1 workload? If so, how would he handle it? Could last seasons ending explosion translate over a 16 game season? The answer to all of those questions was an astounding: YES. DJ was the overall leading scorer in fantasy, with his lowest outing of the season being 14.4 points in Week 4. The running back was solid enough on the ground making defenders miss and benefitting from a vulture free backfield. What made him an elite fantasy player was his presence in the passing game. Johnson had a receiving stat line of 80-879-4 which was similar to that of DeAndre Hopkins and Stefon Diggs. Johnson finished his playoff run with 17.1, 26.8, and 33.6 points. He finished his season with six 30-point games and every week you reasonably expected 20 minimum from DJ. He was the ultimate workhorse and will be in consideration for 2017’s #1 overall pick.

Bell was subject to a three game suspension heading into the season. Knowing that, his draft stock fell from a top five lock to going in the tail end of the first or second round. Shrewd owners knew what Bell can do on the field and bit the bullet for the first three games of the season. When he returned, Le’Veon immediately showed why passing on him early was a grave mistake. Versus the Chiefs Bell ripped off 144 rushing yards while catching 5 passes for 34 yards. From there, Bell was a double digit scorer every week which is extremely rare from a non-QB position. Bell’s most notable performance came in the snowy confines of Buffalo. The 236 yard and 3 touchdown game was good for 51.8 points and won him a Roto already for Top Individual Fantasy Performance. With that performance coming in round one of the playoffs, Bell showed his clutch timing and continued to excel in Weeks 14-16. Barring any drug related setback, he’ll be in discussion for the 2017 #1 overall pick.

McCoy was arguably the biggest hit for the RSJ in the preseason, as he was significantly higher in our RB ranks than anywhere else we saw. Shady possesses an elite talent, and was featured in a run heavy offense under Rex Ryan which set up for a very nice season of heavy workloads. If Rex wasn’t a moron and sat McCoy with an injury in Week 7, Shady would have also scored in double digits every week this season. He started slow the first couple weeks, but then shot out of a cannon and was dominant when healthy. Despite a brief panic attack/injury scare in the middle of the year, McCoy was a rock solid RB1 that was commonly going around the third round (way too low). All of us here had him on nearly every roster in multiple other leagues, he was by far the most popular player among us. What really put McCoy into the MVP discussion was his performance in the playoffs. He had games of 22.8, 31.9, and 25.5 in Weeks 14-16. Owners need their best players to perform when necessary, and that’s exactly what McCoy did. He’ll be a first round lock in 2017.

The lone receiver of these candidates, Nelson came into the year with some question marks after an ACL injury. Clearly that wasn’t going to slow him down as Nelson was the most consistent receiver this fantasy season. Aside from the two duds in Week 6 and 7, Nelson put up double digits in every game. Similar to McCoy, Jordy showed up when needed most in the playoffs with games of 22.1, 19.4, and 36.4 to end the year. Nelson benefited from the Packers lack of a true running game and a red hot Aaron Rodgers. With the likes of Antonio Brown, Odell Beckham Jr, Julio Jones and DeAndre Hopkins going early in drafts, owners who took Nelson in round 2 or 3 were doing dances all year long.

And the award goes to…

There was no sophomore slump for David Johnson this year as he was by far the most dominant player in fantasy football. Some confused him as a reincarnation of God on the football field, with no better proof than walking away from a freak Week 17 leg/knee injury with no structural damage. He’s a top 5 lock in 2017 drafts.

(Johnson’s name is called but he does not flinch. Suddenly, four men stand up and raise his chair which turns out was actually a throne. He’s carried up to the podium like Xerxes in the movie 300, and as he steps to the microphone the clouds suddenly open with a single beam of light shining down upon him. Men and women both squeal at just the sight of this demi-god)

Thank you all for this amazing award. I value this Roto award the most as it signifies my dominance over the rest of the small puds the NFL has to offer. I’d also like to thank all those morons that even entertained the thought of Chris Johnson starting the year or eating into my carries. That dudes washed up like Tom Hanks in Castaway. I’d also like to thank my coach Bruce Arians. I told Bruce before the season that I’m Boobie Miles pre-knee injury. I can do it all and I do it so well it will blow those stupid hats right off your damn head. Good thing he listened to me.

Everyone says that the year 2016 sucked, but those suckers clearly weren’t watching me. I grabbed 2016 by the balls and I’m only going to get dirtier in 2017. 2017 will be my year as well so I’ll see you all again at next year’s MVP presentation.

Way-too-early 2017 Winner: After deciding to swear off the kush, Le’Veon Bell takes up a new hobby in the offseason. Now an avid knitter, Bell plays a full 16 games in 2017 and dominates NFL defenses with ease. Retirement homes are filled with Steelers and RSJ sweaters to celebrate.