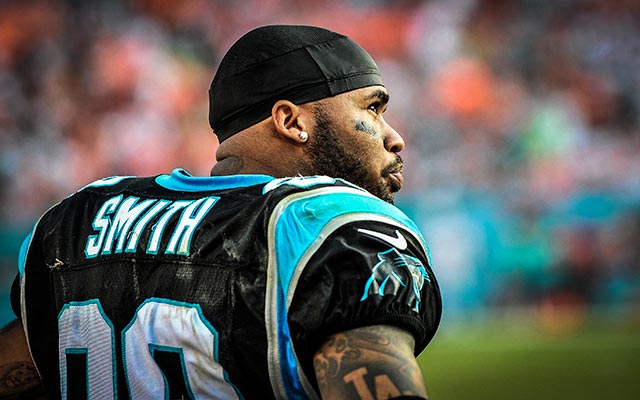 Stars come and go and some tend to have a short window in fantasy football, but Steve Smith Sr. has been an exception and has been a great player for almost 16 years. Today we will pay homage to one of the most outspoken and hardworking wide receivers to grace our football world.

Coming out of high school, Smith wasn’t highly recruited due to his 5’9″ stature and hot-head tendencies. This landed him at Santa Monica College with another Pro Bowl wide receiver by the name of Chad Johnson. Two future all-stars at a community college calls for instant stardom right? Wrong. The 1997 Corsairs finished the season 4-6 and neither Smith or Johnson led the team in receiving. However, scouts couldn’t deny Smith’s drive and he ended up getting an offer to go play for the Utah Utes.

Everyone will remember Smith’s resilience. The man could come back from just about everything and that was proven true early in his football career during a game against BYU in 1999. Smith was fielding a punt when he got rocked by a Cougar player and came up feeling a little bit strange. He stuck it out the rest of the game and went the hospital afterwards only to find out he had broken a vertebra and was given a 50-50 chance to ever play football again. We all know how that story ended up, and it just sets the stage of how much fight Steve Smith truly has.

In the 2001 draft, the Carolina Panthers drafted Steve Smith in the third round and on his very first play as a professional, he took the opening kickoff back for a touchdown and just like that, heads were turned in his direction.

Steve Smith’s best fantasy season came 4 years later in 2005, where him and quarterback Jake Delhomme both made it to the pro-bowl. Smith had a breakout year leading the NFL in receptions (103), yards (1563), and touchdowns (12), making him the number one fantasy wide receiver at the end of the year.

Smith continued this dominance for the next three season from 2006-2008 as well, going for over 1,000 receiving yards and at least 6-plus touchdowns. He was a fantasy star that everyone wanted in those days and continued to shine even when the odds were stacked against him.

Steve’s stable production didn’t seem to slow in Carolina as he put up two more 1,000 yard seasons after 2010, but a PCL sprain may have had the Panthers thinking his time was over as they released Smith on March 13, 2014.

Seeing how much of a stud Smith was, the Ravens quickly jumped on board giving him a three-year deal to still prove he was the player everyone else — besides the Panthers — thought he was. In a revenge game against his former team in Week 4 of 2014, Smith exploded; going for 7 receptions, 139 yards and 2 touchdowns. A day that would have been good for 32.9 fantasy points in PPR leagues.

Smith has been defying age for his whole career, showing that he may have found the fountain of youth somewhere and is only sharing it with Tom Brady and Adam Vinatieri. He finishing his career as the all-time touchdown, reception, and yardage leader in Carolina Panthers history. He also ranks 7th overall in all-purpose yards (19,180), as well as 7th in receiving yards (14,731), 12th in receptions (1,031) and 25th in touchdown receptions (81).

I believe I speak for everyone here at Roto Street Journal when I say thank you Steve Smith Sr. for being the outspoken, cocky, and sometimes disrespectful player that you were. You were unpredictable and we can always appreciate that. Also, a special thanks to you from the fantasy football teams you helped throughout the years.