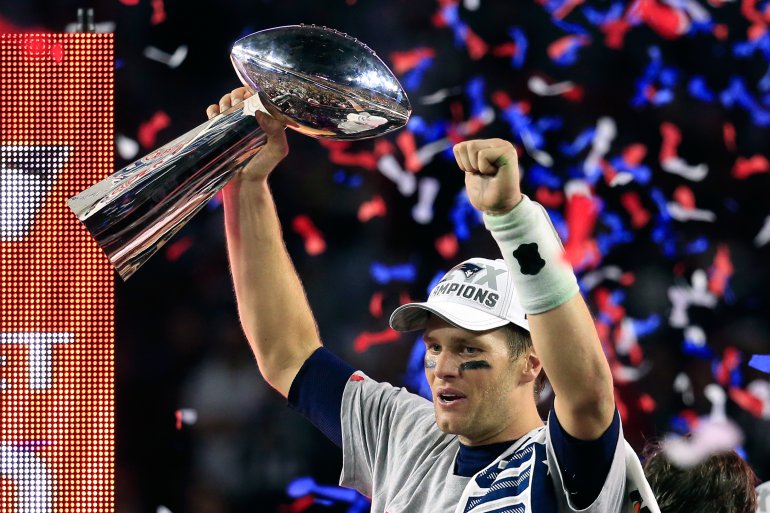 The NFL Playoffs are here, which means an excuse to extend the fantasy football season even longer. Find out how to do it...and do it well.

Congratulations. You’ve officially survived Week One of the cold, fantasy football-less world (unless you extend your league’s championship into Week 17, you pathetic excuse of a human).  True,  fantasy title stories have still been acceptable conversations (right?) Yes, DraftKings is still in full swing.  But this is a major first step, even with fantasy dust still lingering in the air. Your fellow fantasy addicts at The RSJ are proud.

We’re also here to keep the fantasy mojo alive and help you truck forward through these dark, hollow times with NFL Playoffs Fantasy Football.  Yes, the postseason and its high-stakes nature already make for some enthralling action; still, a Playoff Fantasy League can turn up the thrill factor even further.

And, let’s be real here — if you’re still reading this blog, I probably don’t need to sell you the value of four extra weeks of fantasy.  This is, afterall, still fantasy FOOTBALL… as fun as our TV Games are, nothing can replace actual pigskin.

See how we utilized our Big Board in our Experts Draft.

So don’t miss the boat, and follow these six easy steps to setting up and dominating your NFL Playoffs Fantasy Football drafts:

Just like regular fantasy football, you draft actual NFL players and score points based on their on-field performance.  Unlike regular fantasy football, you are NOT matched up with a weekly opponent, and instead your goal is to to score the most total points over the entire course of the postseason (aka composite scoring).  As we’ll cover in greater depth later, this makes the quality of the team just as, if not more, important than that of the actual player when you’re drafting– the more games, the more chances to rack up points.

Step One – Find Five Other Addicts

Six is the ideal league size for the fantasy playoffs.  With only 12 teams to select talent from, playoff fantasy rosters can thin out very fast with more than six owners.  Fewer teams is acceptable, but, just like 12 versus 10 team leagues in regular fantasy, this doesn’t require as much skill and carries a JV Stigma.  Plus, the more opponents, the higher payouts and more shit-talking opportunities.  Your regular fantasy league should contain at least five other degenerates to chose from. Aim for six.

Whether Fantasy Football or Fantasy Bachelor, knowing the scoring system and roster setting is 100% necessary before drafting:

Playoff Scoring – We recommend staying consistent your regular season scoring system — 1/2 PPR is my personal favorite.  The RSJ will track points for all relevant players and in all three major scoring formats (standard, half-PPR, full PPR) for your convenience, so stick to what you know.

Rosters –  As alluded to, a 12-team talent pool keeps your main options very limited.  As such, we recommend the following roster settings:

Note – if you want to stretch the depth even further, we recommend going three WRs instead of adding a flex, as RBs and TEs thin out very fast, whereas quality WR options are usually available past the top-12.

With these roster settings, the #1 option of every team needs to be considered, but is not overly thin. You just need to make sure you’re drafting from the right horses, making this next step crucial:

As we mentioned at the top, your players can score for as many games as their team’s last.  This makes potential games played a crucial consideration; even though I like Julio Jones‘ talent more than, say, Julian Edelman‘s, New England is far more likely to play in three games, making JE11 the more valuable fantasy playoff asset. Ranking the teams based on how many games you believe they’ll play is a crucial step.

Later this afternoon, I’ll be releasing my own in depth Team Rankings and the thought process behind them. Be sure to check it out.

Now that you have potential games played at the forefront of your mind, it’s time to make your Player Rankings. I recommend doing each positional set first, before combining them into one Big Board — this way you can see where the drop offs happen and adjust accordingly.

Historically, QBs that lead Super Bowl runs have been the anchors of fantasy playoff championship squads.  This year, however, features so many high upside skill players on teams that could go on Super Bowl runs, and the ranking process will need to adjust accordingly: Point factories like Le’Veon Bell and Ezekiel Elliott could provide massive RB edges in a thin pool if they’re afforded multiple games.  Dominant target-hogs Antonio Brown, Odell Beckham, and Julio Jones could bring postseason titles with 30 point ceilings every time they touch the field.

In short, with a powder keg of explosive fantasy talent, 2017’s rankings will be both far more exciting and difficult to sort through. Make sure to check in throughout Wednesday to see how our positional rankings and Big Board shake out.

Snake format. You don’t need an explanation. We’ll have an RSJ Experts Draft for your viewing pleasure on Thursday, but two quick rules.

Rule 1: Pick an AFC and NFC horse and draft accordingly

Once you draft your foundation players in Round 1 and 2, you’ll want to build a team that complements these anchors. This means drafting from teams that don’t project as immediate or near-future opponents. You might, for example, pick sixth and your top three QB options are taken.  If you’re now forced into Eli Manning, don’t suddenly draft Jordy Nelson in Round Two, as your going to lose one automatically in the Wildcard Round.

As is true in any regular draft, follow your immediate instincts. If you feel the Falcons are going to crap their pants, pass on Matt Ryan in favor of Russell Wilson. If you’re a rambling lunatic and think Detroit is going to shock the world, please seek immediate attention.  And still draft Matt Stafford. (And join my league).

We’ll do all the dirty work for ya in our Monday Fantasy Playoff Recaps (Standard, Half-PPR, and PPR for each relevant player). If you need help setting up a spreadsheet for your scoring and roster settings, reach out @RotoStreetJ on Twitter or to our Facebook Page.

But most importantly, have fun. Make a side bet or two. Talk aggressive, soul-shredding trash. You’ve only got four weeks of football left. Mine as well squeeze every last fantasy drop out.