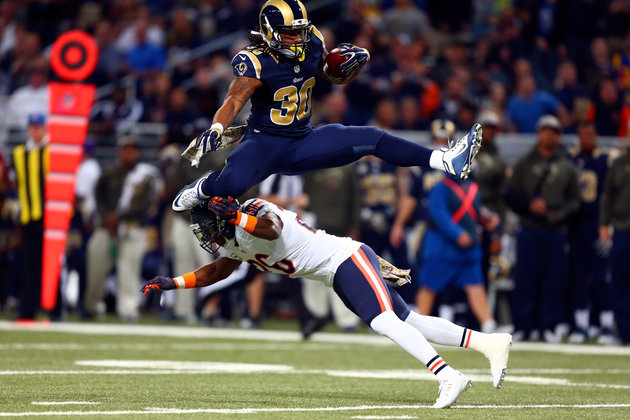 We're here to help you with your last minute start or sit decisions.

Merry Christmas and Happy Holidays to every one of you out there! Follow us on twitter @RotoStreetJ and tweet us if you have any specific sit or start questions! Good luck!

Derek Carr should get back on track this weekend against the Colts in Oakland. Indianapolis is allowing over 16 fantasy points per game to quarterbacks so expect Michael Crabtree and Amari Cooper to get back on track and help light up that secondary.

Cam has been disappointing this year, but Atlanta is one of the best defenses a quarterback can face, as they allow an average of 18-plus fantasy points per game.

Palmer has only thrown one touchdown in the past two meetings with Seattle. Arizona will have to get their run game going to win this one. I can’t see this game being high scoring after their 6-6 tie earlier in the season.

Todd Gurley has been struggling all season but this is the week he could win you your championship against the league’s most putrid run defense.

Frank Gore doesn’t age! He’s having another solid fantasy season and against a terrible Oakland front he should put up a solid statline.

Matt Forte has really been showing his age as the Jets mistakenly overused him early in the season. Now he’s banged up and barely has the strength to produce anything as of late — not to mention the emergence of Bilal Powell.

Booker isn’t worth a play verse the 49ers so he’s definitely not worth a start against the Chiefs. That backfield is a mess.

Sanders had a lackluster game against the Patriots so I expect him to go out and prove something in this must win game. Don’t forget he put up 29 PPR points against the Chiefs earlier in the season.

Inman leads the Chargers in routes ran, so with that volume should produce fantasy points. It also helps that Tyrell Williams has been bothered by a shoulder injury recently, which has resulted in a bunch of Philip Rivers‘ targets to Inman.

With Bryce Petty having a clear obsession with Robby Anderson, Brandon Marshall has been rendered useless with Petty under center.

Kelvin Benjamin is borderline unstartable and even against this terrible Falcons secondary he’s hard to trust in a crucial week.

With Tyler Eifert already declared out, and Jordan Reed and Ladarius Green expected to be declared out before their respective games, here are a few streaming options:

Vernon Davis – If and when Jordan Reed is declared out, Davis is a legit top 10 option at the tight end position. In Reed’s three missed games this year, Davis has put up 13-176-1. The Bears allowed 95 yards on 7 receptions to the Packers’ tight ends last week.

Dion Sims – From our Week 16 tight end rankings: “Before you claim I’m just number chasing his two TDs last week, take note that he’s scored in three of the past four weeks, and (remember Julius Thomas?) Gase has always loved using TEs in the red zone. Matt Moore clearly trusts him there, and I’d be far from shocked if Sims puts another in. The 0 point floor is real, though.”

CJ Fiedorowicz – Still only owned in 29% of leagues and going up against the second most favorable defense vs the tight end, Fiedorowicz is a solid option against the Bengals. Ryan Griffin might steal some snaps away from the former Hawkeye, but CJ should find the end zone.