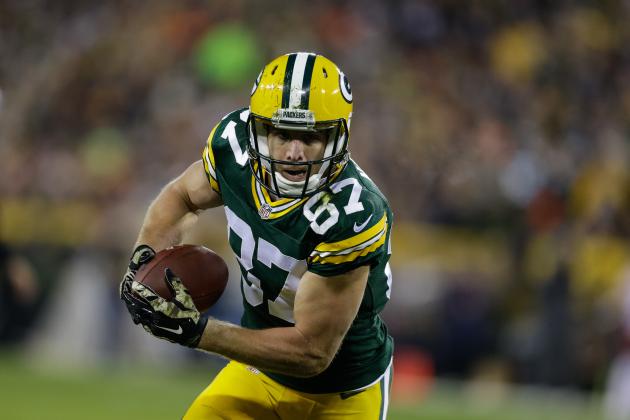 Just like how we like our women, Week 15's wide receivers are scarce at the top but heavy at the bottom. Let us help you sort through the mess and get you to a championship.

Congratulations. Whether through a bye week or a scrappy Week 14 W, you’re now one step closer to that fantasy ship… and proving you’re smarter than all of your idiot league mates. Don’t be robbed of a life moment that’ll rank alongside the birth of your first child this late in the game, and make sure your lineup is perfect with our Week 15 Rankings.  Hit us up on Twitter @RotoStreetJ or on our Facebook page for any burning Sit/Start questions.

Note – The high-end, surefire locks are minimal at WR with some brutal Week 15 match ups; if I’m making a DKings lineup, I’m taking advantage of the cake RBs and hoping to hit some of the juicy mid-tier WR matchups.

Julio Jones still hasn’t practiced, and is currently assumed out in these rankings — why risk it versus the 49ers. Should he play, this has a really sketchy decoy feel, but he’d still be in the top-30 for WRs in such a joke matchup.  Taylor Gabriel is ranked accordingly.

Despite returning to a limited practice, AJ Green remains very sketchy and is also not included in these rankings. He will slot in similarly with Julio in the top 35, but with a serious goose-egg floor.

Donte Moncrief has yet to practice, and seems likely to sit. At less than 100% and in a tough matchup + with such a plethora of available options this week, there’s better options out there.

8) Tyreek Hill (KC) vs. TEN – Electric is the only way to describe this kid, and Tennessee surrenders huge plays after the catch. Another monster effort should be on the way.

11) Amari Cooper (OAK) @ SD – These disappearing acts are getting absurd.

13) Emmanuel Sanders and 14) Demaryius Thomas (DEN) vs. NE – A combined 30 targets last week… really, no one else gets looked at, keeping them in the low-end WR1 discussion.

15) Alshon Jeffery (CHI) vs. GB – His chemistry with Matt Barkley is a major question mark, but the matchup is so ripe and Alshon should be fresh and hungry after a suspension. If Marquess Wilson and a creature named Bellamy  can rack up stats here, Alshon has some real feasting upside.

17) Rishard Matthews (TEN) @ KC – Was scorching before the bye and a date with Denver; expect him to get back on track versus this generous defense to wideouts.

19) Taylor Gabriel (ATL) vs. SF – This rank obviously assumes Julio is absent or severely limited, but Gabriel’s ceiling is huge regardless. The 49ers haven’t learned the art of tackling, which plays right into Gabriel’s catch-and-run strengths. At least one big play should be expected.

21) Jamison Crowder (WAS) vs. CAR – Has seen a serious downtick in usage with DeSean Jackson finally healthy and Pierre Garcon emerging, but is always a threat to blow up. A generous Carolina secondary could help him regain his footing in a big way.

24) DeSean Jackson (WAS) vs. CAR – Feel another explosive effort here.

25) Julian Edelman (NE) @ DEN  – Hate it, but Jules gets the Denver treatment just like every other WR. Given so much of his game is over the middle of the field, there’s a slight hope for a solid catch-yardage day, but I’d strongly consider an alternative.

26) Brandin Cooks (NO) @ ARI – This passing game is shockingly tough to trust right now, especially in a tougher matchup

While the top tier options are few and far between, this week has TONS of solid options at WR, thanks to injuries, solid match ups, DUIs, or some combination of the three. Many are still out there on waivers, and make high upside plug-in if you’re struggling with sputtering (former) studs like DeAndre Hopkins, Allen Robinson, and Brandon Marshall.

31) Michael Thomas (NO) @ ARI  QUESTIONABLE – He’ll get a bump if his health checks out, but Thomas is very risky at less than 100% and with this offense sputtering.

33) Ted Ginn (CAR) @ WAS – With Norman likely to shadow Kelvin Benjamin, Ginn should run wild against the rest of this abysmal secondary. He brings a serious ceiling, and underrated PPR floor, to your WR3 or flex spot.

34) Robby Anderson (NYJ) vs. MIA – An absolute target monster with Bryce Petty at QB, Anderson actually could carry desperate owners to a title.

37) Mohamed Sanu (ATL) vs. SF – Returned to practice this week amidst Julio’s absence, setting Sanu up for the top possession receiver versus an abysmal defense. A blow-up effort is well within the realm of possibilities, even if Gabriel explodes too.

38) Cameron Meredith (CHI) vs. GB – Alshon’s return puts a damper on Meredith’s Week 15 status, but the matchup is ripe and Barkley seemed to really trust him last week after he caught 6-of-8 balls for 72 yards and a TD. Very real chance he’s the blow up and not Alshon.

41) Brandon Marshall (NYJ) vs. MIA – How the mighty have fallen. Marshall,  Hopkins, and Robinson all below a creature named Robby Anderson? Pathetic.

44) Jeremy Maclin (KC) vs. TEN – Despite his dud last week, Maclin could be tossed in if you’re desperate; we saw what Emmanuel Sanders and Demaryius Thomas did last week.

45) J.J. Nelson (ARI) vs. NO – With Floyd drinking and driving his way off the team, Nelson’s role and target share get a boost. He’s certainly a risk with only three touches in his past two games, but all three touches have gone for scores. With more volume likely on the way, Nelson has some serious blow up potential.  If you’re nervous about a former stud or a Julio / AJ Green decoy, toss him in.

49)  Malcolm Mitchell (NE) @ DEN – As studly as he’s been, this is a real tough spot for the rookie.  With so many other available options, look to the wire.