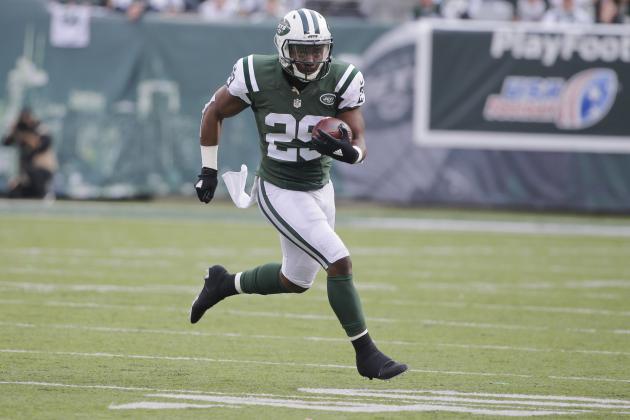 Congratulations, you've made it to the semifinals. Now it's time to mitigate a potential disastrous injury.

Did you listen in Week 12 when we told you it’s cuffing season? As the weather gets colder and your dad bods get even daddier, Week 14 reminded us of just how brutal this late season stretch can be — and how crucial it is to be cuffed up fantasy-wise.

Thankfully, the early reports are promising on Gordon:

Unfortunately, the prognosis on Forte isn’t quite as uplifting, who claims to hear “cracking and popping” in his knee.  Not exactly the two sounds you’d want to hear. He’ll get an MRI Monday, but early speculation is a hyperextension and not ligament damage. Still, a bad case of Rice Krispie knee will almost certainly leave him laid up for a lengthy period of time.

For those of you still in the semis, we’ll look at the Waiver Wire fallout of all this + list out every handcuff in the league, ultimately recapping which insurance policies are worth consideration. Just like we recommended Atlanta and the 26 point tidal shifts they brought those who listened, we’ll also look at defenses worth streaming in Week 15.

Alive and Need a Starter?

If you have any waiver budget saved up, Powell’s the guy to blow your load on.  Following Forte’s departure, Powell was a workhorse in every sense of the word, toting the rock 29 times for 145 yards and two TDs while adding another 5 catches for 34 yards. Yes, this came against the lowly 49ers, and true the life alert grandma who’s fallen and cannot get up could rip off 120 and a few scores against San Fran. Still, Powell’s usage and production are highly significant nonetheless.

Assuming Forte is done for the year, Powell should operate as the unquestioned workhorse to close out 2016; with the useless Bryce Petty at quarterback, this should mean bundles of touches in Chan Gailey’s RB-friendly scheme. Plus, Miami and New England aren’t the most intimidating opponents, making Powell an upside RB2 for the remainder of the fantasy playoffs. While this admittedly took longer than expected, Powell’s difference-making ceiling is finally being realized for playoff hopefuls.

Assuming you’re not in the JV leagues where Bilal Powell is available, the creature named Kenneth Farrow makes a worthy consolation prize.  While less talented than his Jets counterpart, Farrow will also benefit from three-down work under a RB-centric game planner in Ken Whisenhunt. In Gordon’s absence Sunday, Farrow turned 16 plodding attempts into 55 yards while adding 6 catches for an equally inefficient 23 yards. Still, the work was there.

Yes, Gordon’s status is more optimistic than Forte’s, but the studly sophomore is far from a guarantee to return. At minimum, Farrow should see a similarly healthy workload against the lowly Raiders run defense, which is well-worth starting consideration if you have RB2 or flex question marks. Should Farrow receive another start and you’re still alive in Week 16, he’ll put his plodding best against the Cleveland Dumpster Fires…which needs no explanation. On future  matchups and projected work alone, Farrow is the easy #2 option on this week’s wire.

I’ve raved about Redskins WR Pierre Garcon (36% owned) and Chargers WR Dontrelle Inman (23%) for weeks now. Both were highly productive yet again, as Garcon hauled in 5-of-6 balls for 59 yards and a TD, while Inman took down 6 catches for 71 and a score of his own. Both get juicy Week 15 matchups, as Garcon gets Carolina (3rd most points to WRs) and Inman squares off with a beatable Oakland secondary. They need to be added before any other names.

Also, Buccaneers RB Charles Sims (19%) returned and looked plenty healthy, turning four carries into 17 yards and three catches into 33 more yards. The best handcuff-with-benefits in the game should receive more work in his second game back versus Dallas, before another date with the whorish Saints in the fantasy championship. He’s still worth serious consideration.

Despite a dud Week 14, Panthers WR Ted Ginn (28%) gets to square off with a Washington secondary that’s abysmal behind Josh Norman. Thankfully for him, Norman should spend most of the day on Kelvin Benjamin, meaning the boom Ginn has a  strong chance of showing up. He hadn’t been below 14 points for three straight weeks, and Ginn brings a serious ceiling to desperate Week 15 flexes.

You’d have to be both bold and desperate to give Robby Anderson a look in your fantasy semis, but this dice roll could pan out huge. Since Bryce Petty entered the lineup, everyone other wideout has been an after thought:

Amidst the insane volume, Anderson’s hauled in 10 balls, 160 yards, and a TD over the past two weeks. I’ve always believed in “scout team chemistry,” and these two had been cooking up Grease levels of summer loving this preseason. Miami has been getting bombed over their past few contests, and Anderson has real 15+ point weekly upside to close out 2016.

We already covered our top five in Week 12 in great depth, and these remain the same (with Bilal Powell obviously elevated to the top due to the Forte’s injury). Here’s a quick list of who’s actually worth owning: