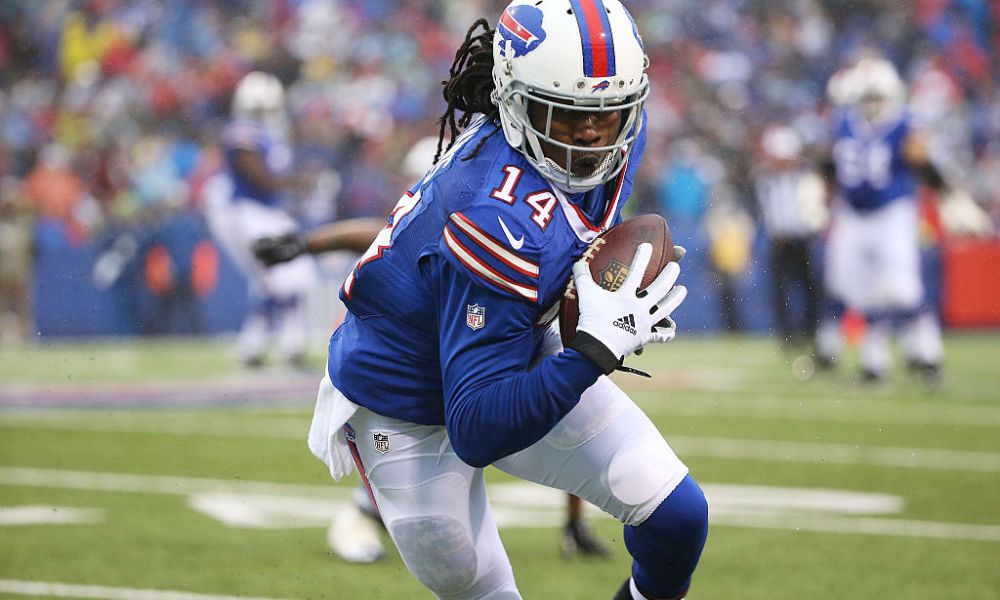 The cold weather is creeping in.  Your “summer bod” was never really a thing, and the soft 15 you’ve added for hibernation really doesn’t help the cause. With each stinging breath of frost-filled air, one thing is abundantly clear:

Of course, my mind’s wandering to 250 lb dread-locked running backs who are an injury away from RB1 status (hello, Derrick). That necessary insurance policy for your top ball carrier in case Satan pays you a late-season visit.  What else would I possibly be referring to here?

With Bye Weeks all but over — only Cleveland and the shockingly fantasy relevant Titans remain for an off Week 13 —  fill-in depth is far less meaningful to your overall team makeup. Spare a select few, the “use now” options are all but barren this week; as such, we turn our attention to the ball carriers with the strongest “cuff season” resumes. A combination of own talent, the juiciness of the surrounding situation, and starter’s injury likelihood all factor in to the back up’s cuff appeal. Without further adieu:

A. Own Talent –  Steam roller. Truck. Bulldozer. I’ve been drooling over Henry since his combine. This is a size / speed / power combination of the rarest form.

B. Surrounding Juiciness – Similarly explored in the above article, “Exotic Smash Mouth” has been an RSJ staple. From the monstrous line featuring three first rounders, to the creative power scheme featuring oodles of pulls and counters, this offense is made to churn out rushing yards. After a disastrous season in Philly, DeMarco Murray has milked an elite RB1 season in this fantasy goldmine, and a tailor-made Henry should be expected to do the same.

C. Starter’s Injury Likelihood: The fact DeMarco’s still holding up despite his heavy workload is miraculous. The dings have been mounting, however, and it remains likelier than not that Murray will miss some time. When he does, expect Henry to feast.

Bottom Line: The ultimate power runner meets the ideal scheme, creating an Elite RB1 ceiling in the fair chance that Murray goes down.  Still has enough time to be 2016’s Next  David Johnson.

A. Own Talent – Despite his age, DeAngelo’s been lightly used in his late career, and he’s looked fresh as ever in his starts, racking up serious yards, TDs, and fantasy points. To quote a preseason article analyzing Le’Veon’s early suspension:

In his 9 full-game starts (he got hurt Week 17 against Cleveland), Williams ran for 793 yards and 11 TDs, while snagging 33 catches for an additional 307 yards. This amounted to 209 PPR points, enough for a No. 8 fantasy finish among RBs in just over a half season. His 23.22 PPR points per-start bested all runners, including Le’Veon’s 18.5.

B. Surrounding Juiciness – Simply put, the Steelers are an RB points factory. RB volume is never scarce in Pittsburgh for the lead dogs, and DeAngelo operated as a true three-down horse as a starter earlier, topping 30 touches in his first two games this season. The explosiveness of the offense as a whole creates numerous scoring chances as well. Wet drops.

C. Starter’s Injury Likelihood –  Le’Veon is a true stud, but has suffered an injury in every pro season thus far. While he’s shown no signs of slowing down in 2016, his massive workload always leaves him at risk for an early exit.

Bottom Line – DeAngelo’s own health is the only reason he’s not #1 on this list, as he recently underwent a meniscus trim. Nonetheless, he’s on pace to return in Week 13 according to Ian Rapoport, giving him season-winning upside for the stretch run if Bell went down.

A. Own Talent – Gillislee is no world beater, but has impressed with his power and burst through the hole during fill-in duties. He’s averaged a robust 5.8 YPC and netted five TDs in limited work, and has the receiving chops for three-down status.

B. Surrounding Juiciness – With former RB coach Anthony Lynn running the show, the Bills currently lead the NFL in rushing yards (1578), YPC (5.3), and rushing TDs (17).  The line is strong, the commitment to the run is fierce, and Tyrod Taylor’s dual threat creates wide lanes. Similar to Exotic Smashmouth, an RB’s dream.

Even better, the Bills have the 3rd easiest schedule among RBs according to FantasyPros; this includes dates with the third worst Steelers and second worst Browns in Weeks 14 and 15.

C. Starter’s Injury Likelihood – As much as I love him, Shady‘s already missed time with a hammy and is now dealing with a thumb issue. While he’s not expected to miss time and is historically quite durable, Shady can’t be considered a picture of health as he ages.

Bottom Line: Behind an increasingly fragile McCoy, Gillislee offers high-end RB2 upside in any start given this dream setup. He’d warrant RB1 consideration should a start come during his cake playoff schedule.

A. Own Talent – Powell explodes off the screen every time he touches the ball. He’s a fantastic receiver and so deadly in space, but can hit it between the tackles too.

C. Starter’s Injury Likelihood – The incumbent Matt Forte has held up shockingly well, but everyone knows the Curse of 30 year old backs, especially ones with a ton of mileage. Powell seems destined for a start or two.

Bottom Line – Powell is an easy handcuff to carry, as he brings plenty of PPR standalone appeal. Chan Gailey’s systems are consistently RB friendly, and Powell would slide in as a low-end RB1 if anything should happen to Forte.

A. Own Talent – While Morris offers far less than starter Ezekiel Elliott in the pass game and overall explosiveness, the veteran back does still run with strong power and vision.  Certainly enough gas in the tank to do damage if called upon given the chance.

B. Surrounding Juiciness – The goldmine setup is where the true  value lies; this line is so dominant, and the team remains committed to the run. With surrounding talent and playcalling on his side, Morris is in RB – heaven. Hell, Darren McFadden made only a few starts yet was a top-five rusher in 2015. GOLD.

C. Starter Injury Susceptibility – While Morris’ situation might just be the juiciest of all, Ezekiel has been an iron man dating back to his college days. He even played with a cast on when he broke his wrist during Ohio State’s national title run, and has shown no sign of breaking down in his early NFL stint.

Bottom Line – Morris offers among the highest handcuff ceilings behind this mauling line, but Ezekiel has yet to suffer a serious injury dating back to high-usage college days. This limits his appeal to #4.

A. Own Talent – I literally can’t even pretend to know a thing about Collins, but Seattle burned a fifth rounder on him despite having solid depth, and NFL.com’s scouting report suggests the power, down-hill running style the Seahawks love:

Well-built, durable frame with feet from a wind­up toy. Plays with amazingly consistent and repetitive tempo as a runner. Able to weave in, out and around traffic without breaking his speed or tempo. Has foot quickness and agility to avoid the backfield traffic and the instant acceleration to get the run back underway. Patient and probing while waiting for a crease. Pad level and knee bend are outstanding. Keeps shoulders square to the line and stays low and tight through the hole. Excellent vision on the interior and consistently jukes and side­steps tackle attempts to create additional yardage. Touchdown hog. Plated 32 rushing touchdowns over last three years. Runs with consistent forward lean and always falls forward.

B. Surrounding Juiciness –  Seattle has always loved controlling the clock and punishing teams with a bruising runner, although they’ve finished the past two season’s in pass-happy mode. This line is also fairly miserable. Mix in a brutal playoff schedule, and Collins’ main appeal is the overall offensive talent and easy depth chart path.

C. Starter’s Injury Likelihood – Rawls saw his first action of he season, and already “got banged up.”

Says Rawls "got banged up'' in playing 40 snaps and will need some time this week to recover. But nothing that would hold him out Sunday.

While Rawls is fully expected to play, this is a reminder of his fragility. Rawls loves contact, which makes him a treat to watch but also a major injury risk. Collins has a very decent shot at a start or two in 2016.

Bottom Line: Rawls is consistently banged up, giving Collins a real shot at some 2016 starts. Working in the rookie’s favor is his tailor-fit for the Seahawks scheme. The ceiling is still capped at middling RB2 given the tough schedule and many unknowns here, but starting RBs are always worth a look.

Other Handcuffs to consider

*Note – I recommended Pierre Garcon here last week and on the podcast, and he proceeded to score the second most FPs among receivers in Week 12 (even with DJax in). He now gets a cake schedule for the playoffs, making Garcon a potential difference maker down the stretch.

Preston Brown in locker room said "we got Sammy probably coming back next week." So there's a belief among some players that will happen.

Legitimate WR1 upside for your stretch run. Don’t miss out.

Boyd flashed big-play ability, smooth route running, and strong hands all preseason and throughout his Pitt career. Amidst AJ Green‘s injury, he immediately became Andy Dalton‘s top target, finishing with 8 targets, 6 catches, 54 yards and a TD; Green’s injury is only expected to sideline him a few weeks, but Boyd will have a shot at meaningful contributions. This kid is talented, and could be a sneaky difference maker in his new role down the stretch.

RB Wendell Smallwood, Philadelphia Eagles, 4% owned – While the latest reports suggest both Darren Sproles (ribs) and Ryan Mathews (MCL) are merely day-to-day, we are also reminded of their fragility. Smallwood is a couple bad tweaks away from workhorse status in a RB-heavy scheme. He has 13 carries in two straight games as the third fiddle, so a starter role would be even nicer.

Cook exploded to haul in 6-of-11 targets for 105 yards and a TD in his return to action. While the upside is real, this performance likely isn’t, and we’ve been down this road already after Preseason Week 3. If you’re desperate at TE or have the space, give Cook a look. Perhaps he keeps it rolling, as unlikely as that seems