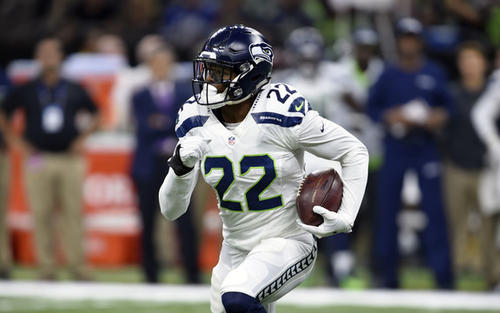 A couple of running backs highlight the Week 11 waiver wire.

I will never insult you again. For weeks I’ve called your inhabitants “creatures,” “trolls,” “wildlings,” and countless other unpleasant titles. But, with LeSean McCoy on bye, CJ Anderson shelved, and a bench with the depth of a weak-stream piss puddle, I was forced to find two RB starters among your glorious treasures. Waiver Wire, you yielded me Kenneth Dixon and C.J. Prosise, and the combined 28 half-PPR points these wondrous beings scored has carried me to a win amidst my hour of great need.

While I certainly like to flash my fantasy eggplant when able, the moral of this letter is to never lose fantasy hope.  True, this may be the last week plug-ins are truly needed, as Bye Weeks will soon be in the rear view, and strategy will switch to insurance policies and upside stashes only.

For now, however, plenty of usable options have emerged to patch up any woes. Here’s the remaining byes:

Prosise got that start and was all over the field Sunday night, logging 77% (54-of-70) snaps and seeing 24 touches (17 carries and 7 catches). His routes were far from just dump offs, and included a 38 yard sideline deep ball between two defenders to set up the ‘Hawks go-ahead score. Hell, Prosise even saw goal line touches over Christine Michael, though he failed to convert his two attempts. Nonetheless, his high usage netted 153 total yards yards and 22.3 PPR points, and Pete Carroll, a notorious deep throater, gushed after the game:

“Isn’t he something? He’s a really good player. We’ve just been pumped up about him the whole time. When we went into the draft, we wanted to get that guy for exactly what you saw tonight… We fell in love with him during the draft process.”

Yes, a close battle with the Patriots helped keep Prosise on the field; battles with Philly, Carolina, Green Bay, and Arizona in 4 of the next 6 all project as tight contests. True, Thomas Rawls will factor in, but he’s more likely to steal Michael’s snaps. This offense has returned to the pass-happy attack of last year, and Prosise is clearly an integral piece. Fire him up in all formats, especially PPR.
Kenneth Dixon, Baltimore Ravens, 19% owned

We got our first extended look of Dixon on Thursday night, and he did nothing but impress. Dixon notched 80 total yard and tacked on 5 catches for a 13 PPR point day. He was patient in letting holes develop, and showed impressive burst and wiggle in space.

You might argue any stats put up against the Browns need an asterisk, but Terrance West plodded to only 65 yards despite 21 carries; moreover, West YPC is an abysmal 2.73 over his last four games, meaning the door is wide open for turnover. If Dixon continues to flash like last Thursday, this will be his job before very long.

While Prosise and Dixon got the sentimental top spots, Starks might carry the most fantasy weight with the clearest path to a featured back role.  Despite returning from injury and his team being blown out — which would suggest a Ty Montgomery game — Starks still logged 71% of the snaps (Montgomery = 28%).  This hints Starks is a major part of the teams’ stretch run plans, and the back looked close to full health while racking up 44 total yards, a TD and three receptions (13.4 FPs).  Given the game-flow / abandonment of the run game, Starks output is even more impressive. There’s some very real stretch run RB2 appeal here.

Whether an ankle or Achilles, Jordan Howard‘s status is highly up in the air. Should he miss time,  Langford would appear next in line. Yet, I’m not blowing my load given how unimpressive he was in his earlier chances + John Fox’s love of hot hands. These are both only options for desperate volume chasers.

You’d think a 10 catch, 162 yard day would warrant greater than 16% ownership — especially after this came against the Seattle Seahawks.  Perhaps the passing bye week has kept him low? Regardless, Woods is a highly usable WR3 or flex, bye week or not, after scoring double digit PPR points in 4 out of 6 games without Watkins. Tyrod Taylor has been on absolute fire as of late, and Woods seems firmly established as his most trusted target. Even in a run heavy scheme, Woods is a #1 WR and well worth a look.

Explosive offenses buoy the value of #2 options, and Rogers is riding the Steelers dreamboat to fantasy relevancy. After a four catch, 42 yard, TD day, Rogers now has 16 and 14 points in two games out of the team’s bye. Sammie Coates logged only two snaps and another goose egg versus the Cowboys, and its clear Rogers has taken this job.  With dates versus Cleveland and Indy in his next two, expect Rogers to keep the double-digit PPR points rolling.

Hill’s been mentioned here plenty, but Sunday represented the first real look at a Maclin-less offense. Despite questions over the #1 WR entering Sunday, Hill was the bonafide top target, seeing 13 targets to Albert Wilson‘s seven. He turned these into 10 catches and 89 yards, while also adding a 12 yard rush. The athletic rookie has made numerous highlight plays, but flashed his possession and after-the-catch abilities as the top dog. Even with Maclin in the lineup, Hill has topped double digit PPR points in 4 of 6 contests; his ceiling is obviously higher should Maclin miss more time, but Hill is usable regardless.

Alshon Jeffery‘s four game ban opens the door for #1 WR duties in Chicago. Meredith has the build and highest ceiling, while Royal offers the established chemistry and past history with Smokin’ Jay.  The schedule is far from daunting, so the upside is there.

Garcon has scored double digit PPR points in 4 of his last 5, including a 6 catch, 81 yard effort last Sunday.  With DeSean Jackson set to miss at least another week or two, the volume for another strong outing should be there. Also – Garcon gets Carolina (5th easiest) and Chicago (easiest) in Weeks 15 and 16 for the playoff minded (although it’s doubtful you’re relying on Garcon if you make it that far).

Way back in early October, we asked Falcons beat writer Jeanna Thomas who is a sneaky sleeper to explode out of Atlanta late in the season. The first guy she mentioned was Taylor Gabriel given his absolute jets and familiarity with OC Kyle Shanahan from their Cleveland days.  After three straight TDs, it’s fair to say she was on to something. Gabriel is serving as the deep threat and gadget guy in the league’s most explosive offense. While he seems just as likely to disappear as he is to score a bomb, Gabriel at least deserves to be added to the Watch List.

Fiedorowicz entered Week 10 as fifth scoring tight end from Week 4 on… so of course two other white, oafish, no-name tight ends score TDs, while he goes 3-of-5 for  26 yards (puke). Nonetheless, Fieds remains lightly owned and might be dropped after his dud, which would be a mistake. He faces Oakland in Week 11, who surrender TDs regularly through the air, and also has the 3rd easiest playoff schedule among seam-stretchers. Brock Osweiler cannot complete a pass over 10 yards, meaning brighter days are ahead for C.J.  Give him a second try, and if he blows again then give him the hard axe.

While Fiedorowicz is my man if I need a Week 11 starter, Henry would be the preferred option as a stash. He should return fully healthy from the bye week, and old man Gates is just a wrong tug away from the IR.  The Chargers have the easiest playoff schedule for tight ends, which will make Henry a top-15 play even with Gates, but carries a top-four ceiling should Gates miss time.

Big. Athletic. Frequently in red zone. QB puts ball where he wants it. We’ve been through this at least three times here. But Green is officially back on the field, and Brave Ben immediately tried to involve him in the red zone. Jesse James was obnoxiously involved, but this may have been a case of “warming” Green up. Certainly worth a stash to find out.

Facing an already talent-deficient Bears team that just lost their top WR and RB, the New York Giants could score 20+ points and are only 12% owned. Similarly, Miami (18%) has scored 13 and 17 points in consecutive weeks, including an impressive four-pick performance versus Phillip Rivers last week. They now square off with the abysmal L.A. Rams offense… tasty. Lastly, the Oakland Raiders welcome Brock Osweiler’s pathetic ass into the black hole, and should feast.