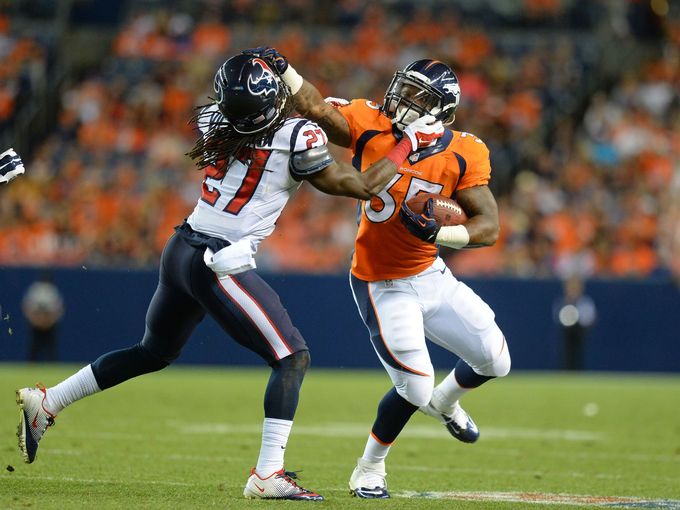 There's not much out there, but we're here to help.

Nearly 70% of the fantasy football regular season is in the books. A wildling named Kapri Bibbs is among the week’s sexiest waiver wire pickups. Hillary Clinton or Donald Trump will be the president when you wake up to see what new creature inhabits your roster. Cue the music:

If any silver lining exists, we’ve finally emerged from Bye Week hell. Quality fantasy options will still be resting, however, so here’s a quick gander to help you plan ahead:

Let’s find out which Troll Tolls are worth the price of admission:

Traditions are traditions.  After being listed on the Waiver Wire Watch for 10 straight weeks as a top stash, Lewis is on track for a Week 10 return and thus he finally joins the high-ranking “usables.” Here’s a quick reminder of what will be rejoining the virtual gridiron:

The fifth best RB in PPR points per-game average in 2015, Lewis scorched the league with unbelievable shiftiness and underrated power, before going down with a Week 9 ACL tear… Lewis was a true fantasy RB1 while healthy, scoring above 16 PPR points in five of seven contests (one of the games under he was limited by an abdomen injury, the other was when he tore his ACL), with three 20+ PPR point showings.

If you didn’t listen the first 9 times and Lewis still remains out there in your JV League, he should be your top add no questions asked. Yes, the team will likely take him along slowly, and his return to form is far from guaranteed. But even just the slight chance of netting a top-10 PPR back this late in the game is well worth a potential whiff.

To all you patient stashers, our time has come. Whether we land an RB1 lifeboat or have been wasting a roster spot all season, the truth will soon be revealed.

This seems insane given Devontae Booker took over just two weeks ago, but he has been wholly unimpressive in that span, gaining only 76 yard on 29 carries (2.62 YPC). Meanwhile, Bibbs ripped off a 69 yard TD reception, ultimately netting 80 yards on only three touches on Sunday night.

Klis is likely ambitious projecting a carry ratio swing  that favors. Nonetheless, Kubiak did state Bibbs has earned more work, and the timing couldn’t be better against the hapless Saints. This feels a lot like Tim Hightower last week, as Bibbs will see some reps and has the matchup to make a quality day  of it, even if Booker reaffirms his grip on the job.  Similarly, this makes Bibbs highly streamable this week, and a high-upside stash in case Booker continues to falter or breaks down.

Despite being fed 21 carries and ripping off a solid 87 yards + a TD, Kelley found himself dumped  onto the Waiver Wire in countless leagues… amidst Bye Week hell and with Kelley’s future role uncertain, the move was justifiable. Based on coach Jay Gruden’s comments on Monday, it was also wrong:

Gruden says for now he thinks Rob Kelley to will get bulk of carries and Jones "will have to earn his way back."

Unfortunately, Kelley’s upcoming schedule is quite brutal, with his easiest matchup projected to be an Eagles defense that surrenders the 18th most points:

This brutal schedule definitely caps Kelley’s ceiling, but if your searching for the comfort of 12-15 plodding carries, saddle up the big dog.  He’s got a few more TDs in him.

Mike Evans is one of only two players to catch five receiving TDs in the past five weeks. The other? Yes, Rishard Matthews of course. After beginning 2016 behind Tajae Sharpe in the rotation, Matthews has finally claimed the top spot in the Titans wide receiver order. Indeed, this title would appear mainly irrelevant in an Exotic Smashmouth offense, but Matthew’s nose for the end zone, and status as Marcus Mariota‘s “broken play guy” in the red area make him highly usable. Chasing TDs can be a dangerous game, but a cakey schedule featuring five unintimidating dates with Green Bay, Indy, Chicago, KC, and Jacksonville in his last six games. Plus, Matthews’ 10 targets this past week suggest an expanded role. He’s a great add for the WR needy.

During his last time on the field, J.J. Nelson whipped out a massive 8-79-2 TD line that seemingly flew under everyone’s radar given his low ownership.  Similar to Rob Kelley, ignoring his big day could be a massive mistake after coach Bruce Arians’ latest comments:

BA: J.J. Nelson has become one of the starters at wide receiver.

Indeed, this aerial attack is difficult to project any given week, but Nelson’s 4.28 wheels bring huge upside to your bye week flex issues. If Nelson keeps the starting role from here on out (he led all  Cardinals WRs with 65-of-71 snaps in Week 8), he could develop into a highly solid WR3 for your stretch run.

Here’s the sneakiest TE1 of 2016. With 7+ targets in four straight, Fiedorowicz is certainly seeing the usage, and his numbers are equally impressive: double digit PPR points in 5 of the last 6, with his lowest game a highly usable 8.5 points. If you’ve been rolling out the Great White Oaf Gary Barnidge or feel unsettled at TE or are dealing with an Eric Ebron bye, Fiedorowicz has to be a top Week 10 priority. His schedule is far from scary from here on out, including dates with Indy (5th worst) and Cincy (3rd worst) in Weeks 14 and 16 for the playoff minded.

Other names to consider for starters:

Note – both of these guys are entirely dependent on the health of the starters in front of them; both would be attractive streamers with another spot start in Week 10. Monitor them closely.

The latest reports suggest Starks has a shot at playing in this Sunday’s game after returning to limited work to end last week. Still, he’s best served as a stash-and-see.  With no sembleance of an actual rushing attack, the door is indeed wide open for Starks to claim a serious role. Ty Montgomery has been widely impressive, and will likely claim most of the receiving work, but early down carries are certainly available. Due to a hard schedule and a far from guaranteed role, I’m not breaking the bank to add Starks. But he played very solidly as the lead guy during 2015, and could have a few notewothy performances to finish 2016.

The Packers haven’t ruled James Starks (knee) out for Sunday’s game against the Titans.

Advice: “Based on the amount of work he was scheduled to do, he hit the targets,” coach Mike McCarthy said of Starks’ Week 9. “Hopefully we’ll push that forward this week. See how he comes out of Wednesday into Thursday.” The Packers desperately need Starks to be a body in their backfield, but he won’t be returning as a conquering hero bell-cow. At best, fantasy owners will probably be getting a low-end RB3 if Starks suits up against the Titans.

There was nothing sexy to Perkins 11 carries, 32 yards, and 3 catches for 15, yet it was still somehow the top production out of this entire backfield. He’s splitting work and snaps almost dead evenly with Rashad Jennings, and the door to steal a featured back role seems wide open. Still, this line has generated minimal movement and now lost one of their best in Justin Pugh, so Perkins is far from a must-roster.

Other names for stashes:

Obviously team need and league positioning determine who you can and should be going after. In general, here’s how The Wolf ranks the prospects available in 50% or more leagues

10) RB DuJuan Harris (33%) * Both Barber and Harris rank above Starks if you need a “must start” this week.