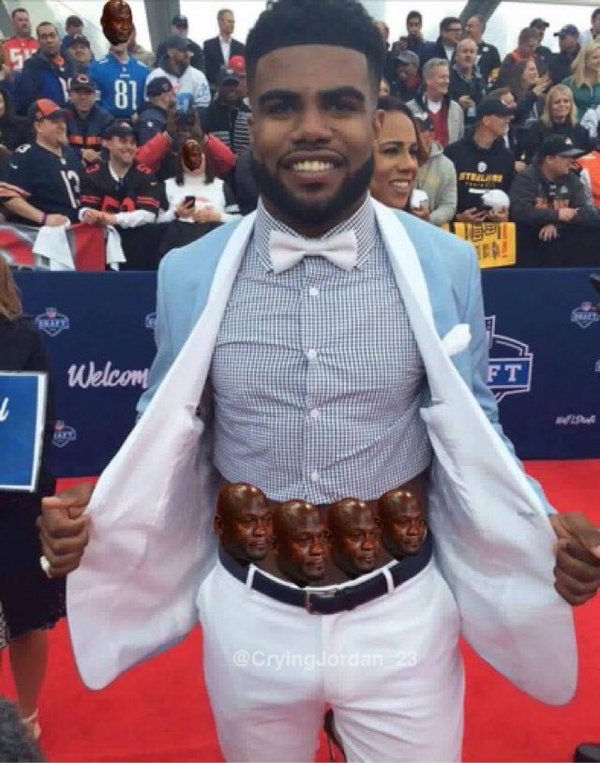 Bye Week hell is upon us, which is doubly concerning when it’s win or go home for many fantasy owners. No one wants their lone source of excitement and joy stripped from their life, so make sure you lock up a win with the best PPR rankings in the business.

Along with Le’Veon Bell (bye this week), these two guys are just head and shoulders above everyone else every single week

Still, the matchups are so juicy for some of these talented workhorses that Elliott and Johnson will be given a run for their money… another tier felt like too great of a drop off.

11. LeGarrette Blount (NE) @ BUF  – Only David Johnson, DeMarco Murray, Melvin Gordon, Lesean McCoy and Ezekiel Elliott have scored more fantasy points. Let’s start treating Blount like the PPR RB1 he is, pass-catching woes and all, as he’s going to score a TD 80-90% of the time.

The dropoff from RB1 to RB2 is pretty steep this week; ideally, you can roll with two Tier 1 or 1.5 options for Draft Kings.

12. Melvin Gordon (SD) @ DEN – The only team that’s held Gordon out of the end zone is a fair bet to do so again, rendering the TD fiend into a high-end RB2 this week.

14. Latavius Murray (OAK) @ TB – He’s back and being fed like the featured guy after poor fill-in showings from DeAndre Washington and Jalen Richard. Ride the TD gravy train.

17. Jeremy Hill (CIN) vs. WAS – Bad run defenses = Jeremy Hill feeding time. Saddle the fat fuck up for another feast.

22. Chris Thompson (WAS) @ CIN – Very excited to see what his workload and production looks like against a highly exploitable Cincy defense.

23. Knile Davis (GB) @ ATL – Kniles “Don’t call me Miles” is reportedly part of the Week 8 game plan; what better time to get assimilated than versus a puke-worthy Falcons defense that just surrendered three TDs to Melvin Gordon? A low floor, high ceiling dice roll for your bye week pleasure.

25. Theo Riddick (DET) @ HOU QUESTIONABLE– Riddick took limited reps in practice, potentially getting him on track to play versus a Houston D that can be had without JJ Watt.

30. Jordan Howard (CHI) vs. MIN  – With Jeremy Langford potentially back, we could see the disgusting committee that the wretched John Fox always wanted. Against a tough Minnesota defense, no thank you.

31. Matt Jones or Robert Kelley (WAS) @ CIN – Jones may be out with a knee injury, hence Kelley’s inclusion on this list. These guys are both here as potential TD options for whoever’s in the big back role… really not much else to see after that.

32. Chris Ivory (JAC) @ TEN – Where did you go? I miss you so? Seems like it’s been forever since you had relevance.

33. CJ Prosise (SEA) @ NO – Here’s a dart-throw PPR guys — CJ Spiller was just cut, indicating the team is ready to ride out Prosise. If ever there was a time to breakout, it’d be against the absolutely pathetic Saints.