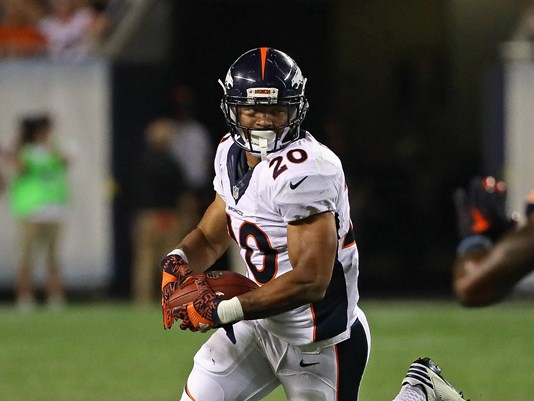 Here's how to dominate the Week 8 Waiver Wire.

Well folks, welcome to a place often referred to as “Rock Bottom.” We are officially past the midway point of the fantasy football season…the Walking Dead premiere battered our hearts into bloody pieces of pulp…Bye Week hell is officially upon us, and Redskins RB Chris Thompson might just be the best waiver wire option to fill voids. Yep, the night is most certainly dark and brimming with terrors right now.

Nonetheless, (somewhat) useful fantasy commodities are still lingering around in over 50% of Yahoo leagues. Unlike last week, where some quality long-term prospects like Jay Ajayi were widely available, Week 8 doesn’t bring any clear “empty the FAAB wallet” prospects. Still, with 12 teams set for bye between this week and next, (fucking NFL), there’s some guys to fill your gaps.

Booker has been listed as an upside stash the last few weeks, but, after out-snapping starter CJ Anderson 35-28 on Monday night, the rookie back has newfound RB2 appeal. This is especially true with a Kardashian sized cake schedule the next 3 weeks: San Diego (4th worst), Oakland (10th worst), New Orleans (THE worst).  More importantly, Booker is seriously producing in his snaps, turning 17 totes into 88 yards and a TD, and looking very impressive doing so. He sees the hole very well, and shows no hesitation in bursting through with noteworthy power — all crucial for Kubiak’s one-cut-and-go scheme.

True, Anderson was somehow more impressive on Monday night with his best effort in weeks, but expect Booker to continue seeing 50%+ of the snaps and yielding similar yardage outputs against the upcoming powder puff defenses. Now with this standalone appeal added to his sky-high stash upside, Booker needs to be owned universally.

With no running game in sight, Aaron Rodgers chucked the rock an absurd 56 times on Thursday night, breaking the Packers completion record in the process (39). A ridiculous 16 of these looks came Adams’ way, and the third year wideout hauled in a career high 13 receptions for 132 yards and 2 TDs.

Yes, the sheer volume is impressive on its own. But the catches — many coming in contested, one-on-one situations and/or requiring tremendous chemistry and timing with his QB — were the true highlight. Adams sure looked like an Alpha receiver, which of course is preposterous to say with Jordy Nelson and Randall Cobb to feed, but 45-50 weekly throws to divvy up isn’t an insane expectation. Knile Davis isn’t about to cause seismic shifts in the offensive philosophy, so Adams should be a shoe in for the 7+ targets he’s already seen in 4 of 6 contests.  Truly high-end consistency might be a bit lofty, but Adams should be very usable, especially in juicy matchups, for the remainder of 2016.

Everyone knows the classic story Jack and the Beanstalk — a poor family is in shambles, our protagonist naturally and wisely acquires magical beans, a massive stalk follows, giant, fee fi fo fum, some goose shits out golden eggs, life is good. Well, maybe your tight end spot has begun a lot like Jack’s family — broken and in need of a miracle; father figure curiously absent through it all, probably an abusive drunk with a restraining order.

Doyle doesn’t share just first names and farm-hand looks with our story’s protagonist. No, Doyle must also have a stash of magical veggies that he planted downstairs, because holy hell that man is towing a sky high stalk between the legs.

Here’s the football side of it: Doyle caught 9-of-10 targets for 78 yards and 1 TD. Digging deeper only highlights his massive role in Dwayne Allen‘s absence:

Doyle played on 92.9% of snaps, ran route on 36 of Luck's 39 dropbacks & saw 10 targets. Better usage than DAllen has seen in entire career.

Really, there’s only one thing, even more sizable, that matters here:

Just like the fictional Jack, it’s time to climb this stalk and let it lead you to the promised land. Doyle should be considered a TE1 until Allen returns, and quite possibly even after.

This one makes no sense to me, and is far from Crowder’s first appearance on the Waiver Wire Watch. But let’s drive some facts home:

Yes, injuries around Crowder have buoyed his value. Yet, Reed and Jackson have never been pictures of health. Crowder should remain a highly dependable PPR WR3 and useful standard league flex play from here on out, and owned in far more than a third of leagues. His chemistry with Kirk Cousins is very real.

Thompson might be the highest upside acquisition of the week, even if he has a deep cellar floor. Yes, the team-leading production for a typical third-down guy was notable: 12 carries, 73 yards (over 6 YPC) and 7 receptions for 40 yards. More important, however, was that his increased involvement came immediately following Matt Jones‘ third fumble in the past five games — a historic problem for the sophomore.

Given Thompson’s smaller size, he’ll likely always be a timeshare back. Still, coach Jay Gruden would be blind to miss the spark Thompson brought this offense out of the backfield, and more work should be coming. At minimum, Thompson is a must-own in PPR formats and a worthwhile addition if you have bench space regardless of scoring or league size.

(in Planet Earth Morgan Freeman voice) Though highly dull and unexciting upon first glance, the Asiata carries more than meets the eye. A broad creature, Asiatas run with a heavy, plodding gate, rarely producing more than 3 yards per tote. Most often emerging around the 10 yard line, the Asiata remains tough to bring to the ground, thus indulging in a heavy-TD diet.

(back to Wolf’s obnoxious voice) With Jerick McKinnon suffering an ankle injury Sunday, Asiata saw some serious work. He notched 18 touches for  80  total yards, including six catches. Asiata is well worth a stash, as he’d be a very viable RB2/flex play against the Bears in a featured back role.  If you’re singing the Bye Week blues, pluck a Wild Asiata out of it’s waiver wire habitat for a quick stream ride.

Four TDs, 21 targets, 14 catches in his last three all make LaFell worth at least a parting glance. His latest effort included 4 catches for 83 yards and 1 TD, and Lafell has solidified the matchup-advantageous spot as AJ Green‘s Robin. While his long-term prospects are slightly hurt by Tyler Eifert‘s imminent return, Lafell should be a solid streamer against a weak Washington secondary that may be without the concussed Josh Norman.

Boldin will be using a wheel chair and still total 650 yards and 7 TDs on an NFL field.  Matthew Stafford is flat out balling, and Boldin is among his most trusted red zone blankets out of the slot.  Jim Bob Cooter is using the crafty veteran’s big body and smoothness to perfection in the red zone, and Boldin is a very fair bet for another TD if you’re in WR3 need.

What is this, Cleveland’s sixth string QB? Sure, the Jets defense is abysmal. They should still put up stats in this cake spot.

Just saying his name induces vomit in the mouth, but Patterson has 6 + targets in three straight, including a TD and double digit fantasy points in his past two.  The former mega bust just produced his best effort in years (6 catches, 67 yard, TD), against a highly formidable Philly defense nonetheless. There’s certainly a greater chance the guy is just a quick flash who will be shut down quickly; he’s not suddenly running a full route tree or anything. Still, the physical gifts look to still all be there, making Patterson worth a look if you’ve got some space or need a desperation start — Chicago just got aerially assaulted.

With Doug Martin without a timetable, Barber now holds the valuable “handcuff with benefits” role in the Tampa Bay backfield.  Jacquizz Rodgers is the unquestioned featured back, but Barber was worked into “breather” duties frequently, and performed quite well: 12 carries, 84 yards, TD. He’d carry high-end RB2 upside in the case of a Rodgers injury, which is a real possibility given the extensive work the diminutive Rodgers is receiving.

This offense is in shambles, but Lee has been a high point the past two weeks. He hauled in 7 of 8 targets for 107 yards against Oakland after a 6 catch, 61 yard day the week before, and could be a desperation play if you’re facing the bye week blues.

Cameron Brate? Adam Humphries? That creature named Cecil Shorts? Who was going to be the biggest beneficiary of Vincent Jackson‘s absence?

Turns out none of those, and instead something called Russell Shepard takes that cake (for now). He totaled 5 catches, 77 yards, and a TD Sunday, and now gets a chance to repeat against the worst secondary in the league versus wideouts. Throw him on the Watch List, at minimum.

Wouldn’t be the Waiver Wire Watch stash section without the weekly Dion Lewis (28% owned) reminder. Still a potential 0, or RB1. Throw it on the bench.

The last time this guy touched the field, he caught 5 balls for 104 yards and 2 TDs in limited action. Gordon is now gone, and the offense is still clicking. Who’s to say Coleman doesn’t take the #1 role from Terrelle Pryor? Upside worth stashing for sure.

Terrelle Pryor‘s now dealing with a hamstring injury, so the chance Coleman takes over the #1 role is even greater.

During the Thursday night blowout, Packers RBs only handled four of the team’s 23 rushing attempts. While this is a result of an emergency situation, the team will certainly want to fix this. Really, the only warm body standing here is Davis, and the offense seems to be on the rise. Rodgers will indeed be airing it out 45+ times most weeks, but Davis will have a fair share of goal line chances to cap off.

Here’s hoping he gets trade out of the fantasy hell known as San Francisco and to a team that can maximize his deep speed. Fingers crossed.

*Cordarelle Patterson as the best Hail Mary of the week that’s out there in your leagues.