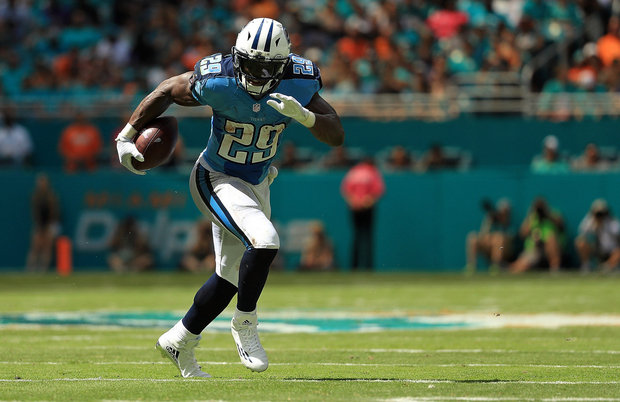 Note  – Carlos Hyde and Eddie Lacy have already been declared OUT for Week 7.

Friday Update – LeSean McCoy is expected to miss Sunday’s game with a hamstring injury; despite reports he’ll be a game time call, we believe he’ll be out. As such, Shady’s been dropped off the list, while Mike Gillislee, now set for some serious volume, vaults up to RB16.

4. David Johnson (ARI) vs. SEA – Generally a weekly #1 or #2 back, Johnson’s getting the Seattle defense treatment here. He should still have a solid outing, hence the #5 ranking, but his chances of a massive 25+ point day are very, very slim.

7. Spencer Ware (KC) vs. NO – Against the most generous defense versus running backs, Ware would rank in the top tier if it weren’t for JaCha. Last weeks carry division (24 Ware, 9 Charles) suggests the team will still ride their big back, but any week Charles could get rolling and the tide could suddenly shift. Expect a TD at minimum, with a massive ceiling.

8. Lamar Miller (HOU) @ DEN – While their pass defense is unquestionably strong, Denver is surprisingly surrendering the 11th most points to RBs. The team will likely sell out to stop Miller, but he could find some space underneath in the passing game against such a blitz-heavy attack. He makes an interesting DKings pivot.

11. Jacquizz Rodgers (TB) @ SF – Doug Martin suffered a setback and has already been ruled out versus San Francisco. In the three games since losing stud linebacker NaVarro Bowman, the 49ers have surrendered 192 yards per game to running backs and 7 (yes, seven) rushing TDs. Meanwhile, Rodgers received a whopping 35 touches in his last spot start, and a similar workload would make him a very real threat for at least 100 yards and a TD. The ceiling is far more massive.

16. Mike Gillislee (BUF) @ MIA – In the Bills run heavy attack, Gillislee should be considered a solid bet for 15-20 carries against a soft defense and behind a solid line. This makes him a real threat for 80+ yards and a TD, and well worth starting if you own Shady. Hopefully you took our advice and handcuffed.

17. Theo Riddick (DET) vs. WAS QUESTIONABLE – Riddick didn’t practice on Wednesday, and is definitely a risk to miss Week 7. Should he suit up, Riddick will dance with the 7th worst run defense in a game that should be a shootout… aka he’ll thrive.

22.  Matt Jones (WAS) @DET – For as bad as they’ve been against the pass, Detroit actually surrenders only the 22nd most points to fantasy running backs. Why run when you can throw all day long? This is a deceptively difficult spot.

I legitimately swallowed back puke typing Hill’s name this high, but if ever a “Hill Game” existed, it’d be versus the hapless Browns. Something tells me we get a throwback 2 TD plodding effort from the shitbum, which lowers Bernard’s appeal.

27. Jordan Howard (CHI) @ GB – After dominating touches in his first two starts, Howard began steadily losing work to Ka’Deem Carey in Week 6. John Fox loves him some committees, making Howard a decent “avoid” against the toughest team in the league versus RBs.

28.  Latavius Murray (OAK) @ JAC QUESTIONABLE – After missing two weeks, Murray returned to a limited practice on Wednesday. This certainly does not guarantee he plays, but Murray would be a solid bet for a TD and a handful of yards after neither DeAndre Washington or Jalen Richard showed much in his absence.

30. T.J. Yeldon and 31. Chris Ivory (JAC) vs. OAK – Ware just ripped this defense to shreds, and plenty of yardage will be available for Yeldon, while Ivory looks like a safe bet for a TD.

33. Matt Forte (NYJ) vs. BAL – He’s looked rapidly worse and worse each week, and now squares off with a Ravens defense that ranks 2nd against fantasy running backs. Avoid.

37. Derrick Henry (TEN) vs IND – I think the human steamroller finds the end zone for the first time in his NFL career.

Tier 6 – The Night is Dark and Full of Terrors

38. Mike Davis (SF) vs. TB – This creature is likely to start and see serious work against a pretty sub-par defense. Desperate times call for desperate measures.

43.  Knile Davis (GB) vs. CHI – Because he’s on Green Bay and they’re facing Chicago. If Davis is actually playing, he’ll fly up into the renowned top 35.