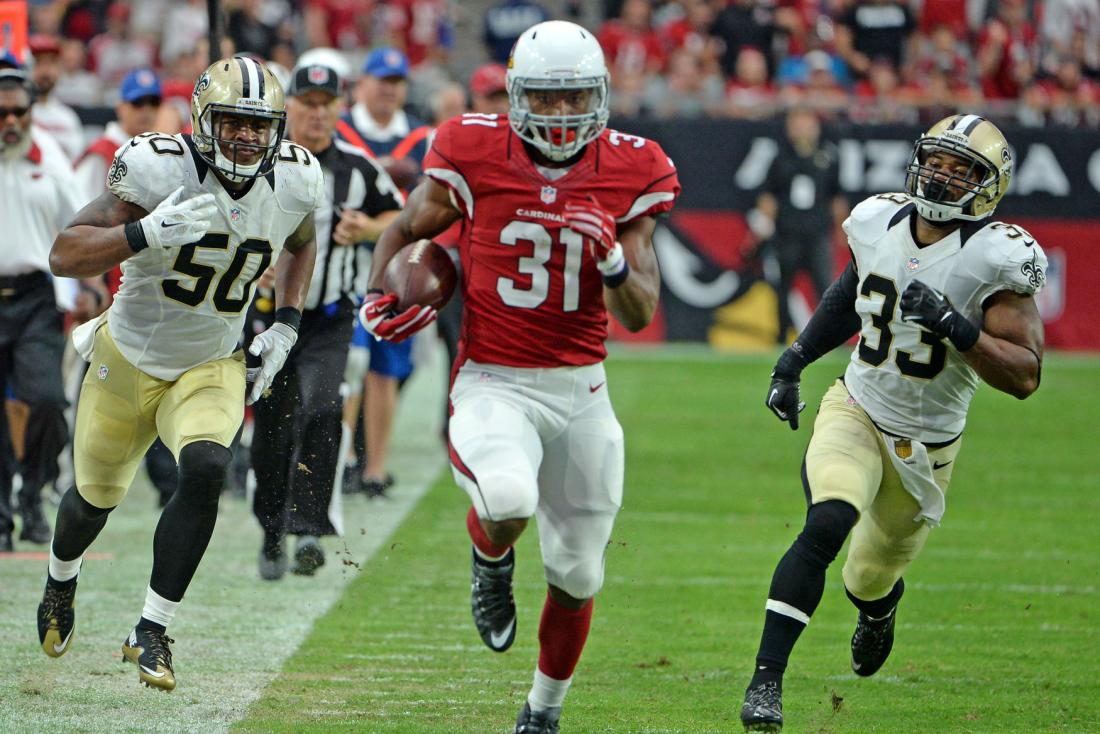 Week 5 is upon us, and we are creeping closer to the “make or break” point of your fantasy season. Perhaps you’re at the top, needing to stay ahead to secure the bye. Or maybe you’re trapped in the cellar and need to string off a miracle stretch run. Regardless, find out who side with in tough lineup decisions — especially with so many explosive team’s on bye– with The Wolf’s rankings.

These two PPR horses are often going to be in a tier alone among RBs. With Drew Stanton at QB and Chris Johnson no longer stealing 7-8 touches while on the IR, I like Johnson to absolutely feast on TNF. He’s been a consistent force all season, but Week 5 should mark his highest output yet.

8. Todd Gurley (LA) vs. Buf – Gurley hauled in five balls last week, and Benny Cunningham’s injury has opened the door for a “three-down back” role. With newfound PPR upside, Gurley could have a true coming out party against a Buffalo D that’s surrendering the 10th most FPs to RBs.

10. Lamar Miller (HOU) @ MIN – The volume will be there, but the match-up renders Miller more of a RB2 this week.

12. Matt Forte (NYJ) @ PIT – Pitt has surrendered the 7th most PPR points to RBs, so this could be a ripe match-up for Forte to turn around his latest slump. This could also be proof he’s over the hill, making this an important measuring stick week for Forte.

This tier is huge, and TDs will likely sort it out come Sunday.

13. Devonta Freeman (ATL) @ DEN – With Tevin Coleman expected to be limited in the high altitude, Freeman could take on a featured back role. His vision and burst have been extremely impressive, but Denver is a very tough matchup.

14. LeGarrette Blount (NE) @ CLE QUESTIONABLE – Given Blount’s history of hip injuries, this latest flare up needs to be monitored closely. If he plays, Blount would be a solid bet for minimum one TD, even if his yardage and overall usage take a dip with The Reincarnate back on the field. James White would become a top-15 play should Blount sit.

15. Jeremy Hill (CIN) @ DAL – He’s become a “TD or bust” product yet again, but Dallas should be ripe for the picking (despite being surprisingly stout against the run).

17. Theo Riddick (DET) vs. PHI – The touches will be there with Dwayne Washington banged up, but Philadelphia has been brutally tough on defense this year. Riddick is still a fair bet for 6+ receptions.

20.  Frank Gore (IND) vs. CHI – He’ll outscore a few names above him and has among the higher floors here, but his ceiling just feels capped at 60-70 yards and a TD.

22. Eddie Lacy (GB) vs. NYG – McKinnon produced well against this otherwise stout defense, so Lacy could rumble. He still looks chubby and slow though, and has yet to find the end zone.

23. Isaiah Crowell (CLE) vs. NE – Game flow could put a dent in Crowell’s Week 5 outlook if the Pats go up huge early. Something tells me he pops in an early touchdown though.

24. Charles Sims (TB) @ CAR QUESTIONABLE – Sims is dealing with a right knee injury, and HC Dirk Koetter has hinted Sims’ load could be reduced. Given the MNF status, have a backup plan ready if you’re relying on Sims.

25. Ryan Mathews (PHI) @ DET – Detroit has gotten torched all year, whether on the air or ground, and all reports suggest Mathews will enter this game as the lead back. As such, he’s a solid bet for at least 1 TD and a smattering of yards.

Hopefully you can find a higher-upside wideout for your PPR flexes, but these guys are startable if you’re in a pinch.

26. Duke Johnson (CLE) vs. NE – He very well could outscore backfield mate Isaiah Crowell if game flow is as predicted.

27. James White (NE) @ CLE – He will shoot into the top 15 if Blount misses the game; as of now, White’s usage is tough to project given the “blow-out” feel of this one. He should be stashed now that Brady’s returning, however, as he’ll see a few more targets per game in more pass-oriented game plan.

29. Fozzy Whittaker (CAR) vs. TB – He hauled in 9 balls last week, and is the clear “pass-catching” back here. Yet, if Newton plays, the Panthers could go up big on TB, making Whittaker a serious “game-flow” risk.

30. Jalen Richard (OAK) vs. SD – Monitoring Richard’s usage in Murray’s absence is a crucial Week 5 move. While I’d prefer having him on my bench and seeing how this committee unfolds, Richard could be tossed in if you’re in a bind given the juiciness of this matchup. He’s looked highly explosive in his limited work thus far.

32. Bilal Powell (NYJ) @ PIT – His role is increasing weekly, making Powell a desperation source of PPR points. He should haul in 4-5 balls, and has a sneaky ceiling if the Jets go down big early.

33. Tevin Coleman (ATL) @ DEN QUESTIONABLE – Coleman’s sickle cell trait makes him a major risk given the altitude in Denver, but as of Thursday Coleman told reporters he was planning to play. He’ll be strictly TD dependent, which is highly risky against a strong Denver defense.

34. Rashad Jennings (NYG) @ GB – Early reports suggest Jennings should be active; the run game might be abandoned early, however, if Green Bay’s offense clicks like in Week 3. This backfield will likely be a nightmare, but maybe Jennings can start gaining a little featured back traction. If Jennings can’t go, Orleans Darkwa will be bumped accordingly.

35. Jay Ajayi (MIA) vs. TEN – HC Adam Gase has hinted at scrapping his four-headed nightmare committee and riding one, maybe two, backs. Unfortunately, he hasn’t given any indication as to who that back will be. If this becomes clearer, we’ll bump a Dolphins back into the startable territory. For now, trusting any Miami back is a risky move.

Update – Despite being deemed “unlikely to play” in Week 5, Arian Foster returned to a limited practice Wednesday. His status needs to be monitored.